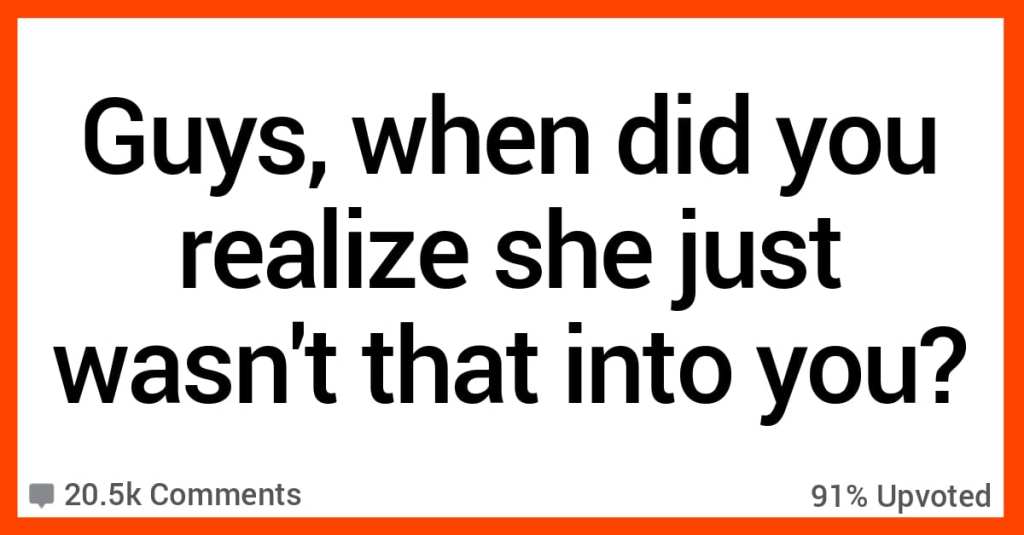 Especially when you’re young, reading other people and sussing out whether or not they’re interested in a relationship can be pretty tough.

The more experience you have, the more times you tangle with other people, the easier it is to tell – though these 14 moments really weren’t that hard to read.

Asked her to senior prom. She said yes but when we got there she ditched me to hang out with another guy she liked.

Wasn’t too bad though cause I danced with another girl who I got along better with.

13. Aww, hugs should be for everyone.

When you go in for a hug and she gives you the side hug.

Back in college, I took a girl on a lunch date. We had a really nice time. When it was getting time to leave, I told her I had to get to work. She said “where do you work?” I said “McDonalds” and I literally could see her attitude shift in one second. “Oh, cool…”

So as I’m driving her home, I said “So can we hang out again?” She replies, “Yeah, totally!”

So the next day I text and ask if she wants to hang. She never responded ….

Asked a girl if she wanted to grab lunch together some time. She said she was busy that day which was interesting as I never specified a day.

I told em I had feelings for them they responded with

9. There’s something to be said for ripping off the Band-aid quickly.

Gave a girl at work my number on a piece of paper and she handed it right back and said ” We talk at work all the time so let’s keep doing that.”

8. The moment you realize this is the worst.

Stopped texting first and realized that she never texted me for three days. It was totally one sided.

7. That’s not a thing that happens.

We set up a date. She stood me up. When I asked her, she simply said she forgot.

6. No need to unravel that one.

“would you like to have a date?”
“mmmm I’d rather not”

And that was that.

Oh this has happened. We went on a date, and some time later I took a trip abroad and brought her back some stuff she asked for. Set up another date so I could get the things to her, and she didn’t show.

I texted her earlier that day to check that we were still good to meet, and responded much later, “Clearly Not”

I kept some of it, gave some away to other friends if they were alright with it.

We were using a message app with delivery notifications, so my message definitely got delivered.

I went to where we decided to meet and she wasn’t there. Doesn’t make sense that she sent a text before her 8PM one because, she’d have been there, or tried to to explain herself if she had a genuine reason. I see what you guys are saying, but it seems unlikely to me.

4. What a strange thing to say.

“Can I have time to think about it?” Then nothing, radio silence for like a month. Next time we talked it’s as if that moment never happened.

I’ve had every rejection under the sun used on me. Laughter, a straight up no, coming up with an excuse halfway through the date to leave, being ghosted, it’s not you it’s me, etc.

One even claimed that she liked me but her parents didn’t approve of me so nothing could happen, only to find out later that her parents actually thought I was great and would repeatedly ask her about me (in that case I think she just wanted sex and nothing more which I should’ve seen from the start)

But that one, “can I have time to think about it?” damn. I’m over it now, but I’ll never forget how much it hurt.

My second date with a girl was to a braves baseball game. She told me she was on the way and we were going to meet there. Once there I got no more responses and she deleted me off of everything.

I’ve heard them all!

We flirted for several weeks, hung out every day, I kept feeling a closer and closer connection but due to circumstances I could not control we were never alone enough together for me to test it. Had some friends plan a camping trip and I invited her and she said yes.

I even specifically told her there’s gonna be two couples there so we’re gonna be in a tent just the two of us, she said yeah she knows. Get to the trip, we have a few drinks and I ask her if she wants to take a walk with me to look at stars (I get it, it’s corny, shut up.) Once we’re a little away from everyone I tell her how much I like her and attempt to go in for a kiss.

NOPE: “sorry chipsconqueso…im not what you’re looking for” shattered me, utterly gutted.

There are so many clues if you’re willing to pay attention!