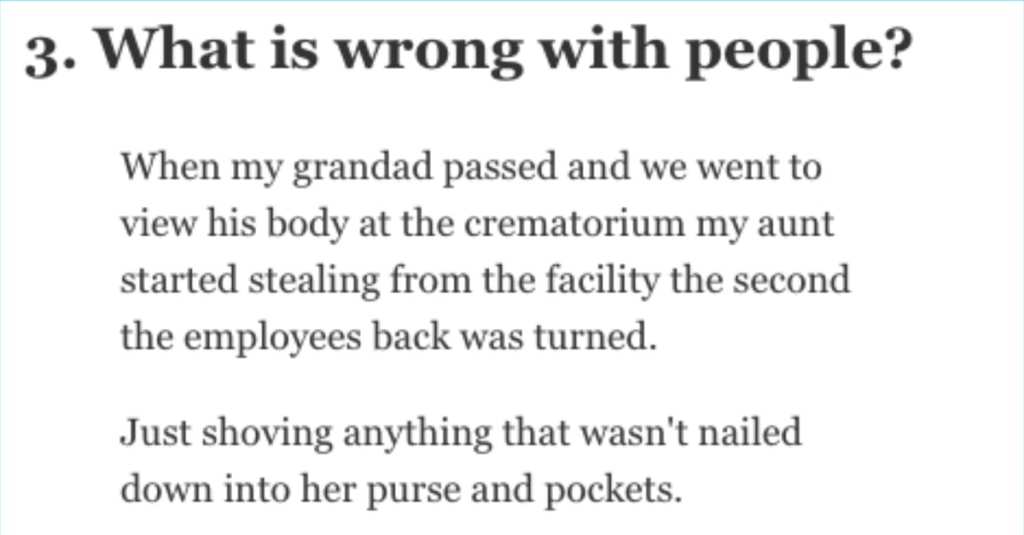 Funerals should be one of those sacred places where human beings are on their best behavior. Someone has died, their friends and family have gathered to remember them and say goodbye, so it seems like a no-brainer that guests should try not to be awful.

These 14 people definitely spied others who didn’t get the message, though.

A few years back, when the uncle of my mother died my young cousin (8) cried a lot at the funeral. It took some time but eventually he calmed down and his parents went for a little walk with him for some distraction.

But then he noticed that his first name was written on one of the tombstones. He mentions it loudly and one of the bystanders said: ”Yeah its already reserved for you”.

The gentleman had a large family and all of his siblings got up and made it all about themselves, dredged up old family drama, made it clear that they resented his wife, etc.

It was so painfully awkward.

12. You’d think he could keep it together for an hour.

My uncle was pissed about something in my grandmother’s Will. So during the funeral, he went out to the parking lot and keyed everyone’s car.

It should be noted, he has severe brain injury from a motorcycle accident that causes him to be constantly angry and paranoid. Still…

I had a fit of hysterical laugh at my father’s funeral just about the time people started to gather at the mortuary.

In my defense, my mother had a nervous breakdown (my father died 4 days after we found out he had lung cancer), there was a lot of shitty stuff surrounding the funeral organization, my mom just flipped, my siblings were 15 and lost so I was at 23 left to handle it all.

I kinda lost it.

10. Jeez. Talk about the wrong time and place.

My husband went to his great aunt’s funeral and while they did the little ceremony in the cemetery, great aunt’s granddaughters were all hiding behind a tombstone giggling and doing coke.

9. This makes me sick to my stomach.

One of my students’ mother died. I went to the funeral with the principal and the student’s integration aide.

After the funeral her father walked up to her and her grandmother and said “I want her out of the house by tomorrow morning”. She was 11 years old.

8. That scene belongs in a movie.

My brother in law is a mortician. Boy does he have stories….

One of the best- A guy disguised himself as a nun, shows up at the funeral, pulls a gun from under his habit and tries to shoot the deceased’s son. Luckily the gun malfunctioned and didn’t fire.

The son then decks the nun and knocks him out, kicks him in the head a few times, and is pulled off by other family. Police are called, yada yada yada… turns out the deceased owed the nun quite a lot of money and the son had refused to honor the debt.

7. Maybe he thought they were compliments?

Her ex told us about all the great things she did in bed and what a loss for mankind that is.

In present of her boyfriend.

At my father’s funeral, one of my aunts asked my mom when would she get out of the house.

5. Was this an episode of The Office?

He handed out his business cards at his stepdaughter’s funeral.

There was very nearly a fistfight!

I knew a guy who climbed up into the casket with his grandfather. This one’s sweet and wholesome.

He was around four years old. He wasn’t sure what was going on, and people weren’t giving him much attention. He asked someone what his grandfather was doing in a box at the front of the room. A relative, thinking they were explaining death in an age appropriate way, told him that grandpa went to sleep, and won’t wake up again.

So we went up to the casket, and climbed up. The room froze in shock. Then he said, “Good night, grandpa,” and he kissed him. Adults told him later you could hear a pin drop and there wasn’t a dry eye in the room.

3. What is wrong with people?

When my grandad passed and we went to view his body at the crematorium my aunt started stealing from the facility the second the employees back was turned.

Just shoving anything that wasn’t nailed down into her purse and pockets.

Unbelievable. And yes we called her out and made her put it all back.

No where near as bad as most comments but the family didn’t allow for his twin to speak.

Straight up skipped over the allocated time for the living twin to get up and speak about his brother. Who was his last remaining immediate family.

I don’t think I can ever forgive the late wife for putting him through that. She treated him so horribly all throughout the sickness, and then to not allow him to be a part of the funeral was the final nail in the coffin.

I don’t even know how I would handle these events!

Have you ever seen anyone act up at a funeral? Share the story with us in the comments!