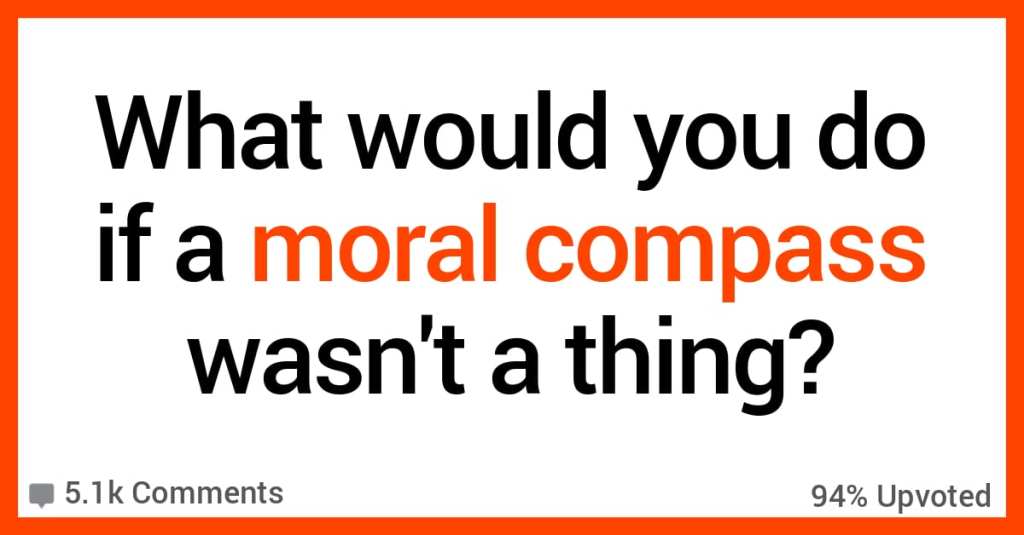 There are people in the world who live without, or ignore, their moral compass. Most of them are probably in jail, alone, or on their way to both, though.

The rest of us listen to the voice in our ear telling us the “right” thing to do, though – but if we didn’t, these 14 people have some ideas on what they might do instead.

I’d have sugar daddies pay my rent and tuition.

Not that anyone will see this, but I just need to tell anybody.

I’d be leaving my family to deal with my father’s death so that I can go and be in my own home, by myself, and completely switch off and actually grieve.

But they need me.

10. If you’re not worried about the risk.

I know some drug dealers and one of them offered me a job cutting/measuring and packing cocaine and heroin but I turned it down.

I would either have to cut it at their place, which is always at risk of being busted while I’m there, or at my place – which I just refuse to do – I have cats, I’m not risking them licking some of that shit up.

It’s just not worth the risk, and also I don’t really want to have a hand in someone else’s addiction. I don’t do drugs or even drink, because I grew up with a heroin addicted mother. I don’t want to do that to someone else’s kid.

Since I do have a moral compass though, I’m sticking it out in my dead bedroom relationship, hoping that one day, when he’s not so stressed out from work, he might actually notice me 🙁

Cracking on to a married guy I know.

Probably joining the neighbor in f*cking his wife while Doom soundtracks are blasting in the background instead of listening to it from the neighborhood while smoking.

Looking for the nearest attractive person to have s*x with.

4. There’s some kind of story idea in there.

Just not give a f*ck about anyone and stop being nice, if you’re stupid I’ll punch u.

Modern medicine has gone too far, if natural selection don’t cut it anymore, I will.

Even if I didn’t have a moral compass, I’d still have a brain and sense of self-preservation which means anything that I’d be more willing to do I still wouldn’t due to the consequences.

Realistically, due to my poor impulse control and my hyper sexuality thanks to my Borderline Personality Disorder and PTSD.

I’d probably rob as many places as possible, have s*x with prostitutes, go back to being an ecstacy addict and hunt down and kill old friends and family who have broken my heart.

Some of these just break my heart (and others are like…yep!).

What would you give as an answer to this question? Share with us in the comments!