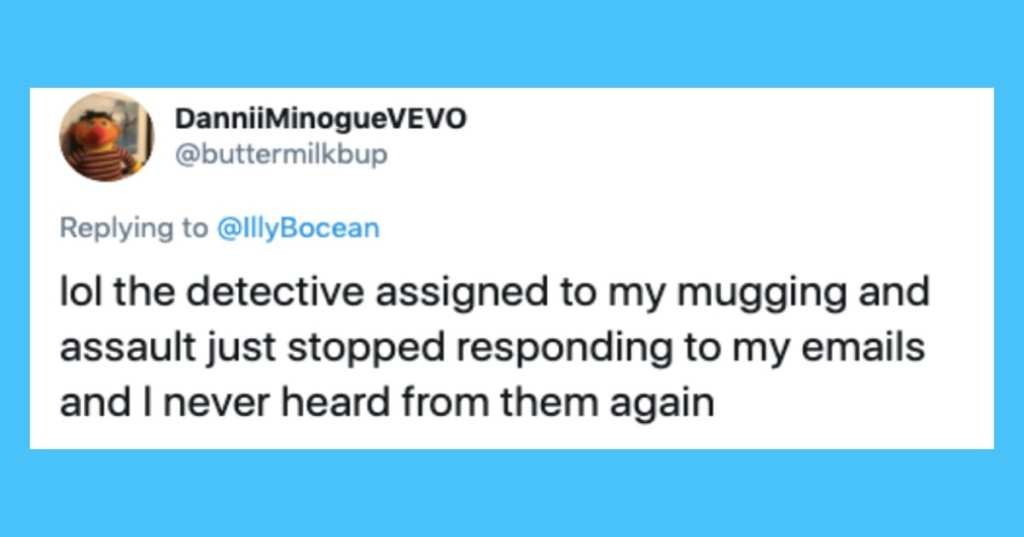 13 People Share How the Police Responded to Their Criminal Complaints

You may have noticed that a revolution is happening in the streets of America.

People of all races, ages, and religions are marching in the streets demanding change, and one of the things we’re discussing is what role the police should play in our everyday lives going forward.

I used to live in these apartments and our cars in the secure basement parking got broken into 10 times in 10 months. someone would come through more than once a month and break into like 20 cars at once. called the cops and they were like “well what are we meant to do about it”

Most people feel like it would still be helpful to have police to call in the case of, you know, a crime being committed.

In a fit of curiosity, though, Twitter user @IllyBocean tweeted, asking their followers to recount their own experiences.

I was told point blank by a cop “we won’t do anything, but file a report so the recorded crime rate goes up and then we can ask for more funding”. And I think that’s pretty much the whole grift!

These 14 replies seem to suggest that the police response to crime is lacking, to say the least.

13. Ah, the classic blame the victim why not.

You shouldn’t have been out here anyway, you know?

I was in the Mardi Gras riot in Seattle in 01. I got jumped & my video camera got jacked. I reported it to the cops in case they found it, & when the cop came to my apt to take the report he asked me if I “learned anything” & that I shouldn’t have been out that night anyway🤷‍♂️

Had a trailer stolen. Cops called a few days later that it was recovered. When I tried to get it back from impound they never returned my calls.

2 years later, a new officer was assigned to impound. Finally got it back. They had been using it to haul snowmobiles the whole time.

11. Seems as if he wasn’t even paying attention, honestly.

Maybe he was just out of shape.

I was mugged at gunpoint by 2 guys, cops showed up about an hour after. While taking my statement, one of the guys biked past us, I pointed to him and told the cop “that’s him”. Cop looked up, said “uh huh” and continued writing.

10. This was surely a defining moment for the next generation.

And not at all in a good way.

… they were given our security camera footage, but did nothing. Huge gruff white cop acted super annoyed and inconvenienced by the whole thing. Many kids cried – didn’t feel supported or safe around the cop. What an asshole. Thirty terrified kids and you act… annoyed? (2/2)

9. It can be hard to tell who they’re after until it’s too late.

Maybe best to just not say anything.

“someone’s needs my help? i smell opportunity to throw them in prison”

8. Imagine being ghosted by the police.

And not a darn thing you can do about it.

I hope the other bloke ended up alive and okay.

The only time I’ve ever thought about calling the police was when I was in a bar once and a drunk patron was threatening to murder someone else. Unfortunately the drunk man WAS an off duty cop and he was calling the cops himself to help him threaten his target.

I mean. It makes sense, though.

I had a chat to a copper later who explained their approach to burglaries was that preventing them was too difficult, investigating them was too much work for too little pay off and most people with "real valuables" had enough insurance anyway.

I of course did not.

5. Maybe our communities would knit tighter together again without them.

You never know until you try, I guess.

Had my car stolen 3 different times and called the police all 3 times. All 3 times I found it on my own with GPS and got it back and told them to forget about it. Police are factually useless. A Community is always able to respond faster in ways that get fewer people killed.

Get a real job, losers.

I was at home asleep after working a late shift when my house was robbed. I woke up when the thief opened my bedroom door and he bolted. The cops made fun of me for being asleep during the day. Didn’t hear anything else after they left.

3. It was literally just sitting there for months.

I don’t even have a joke.

Parents car got stolen. About two years later the council from the next suburb over, literally a kilometer away at most, tracked us down at our new address a hundred K away and said “hey if you don’t move your car we’ll crush it into a cube.” Cops had not looked at all

I’m not lying on nobody.

i was involved in a hit-and-run on my bike some years back, with a pickup truck being operated as part of a small business. the person driving was an employee, not the owner. the detective showed me a photo line up and said i had to pick the owner, who i’d never seen, to proceed.

1. It might have something to do with their response rate.

It’s just a theory, though.

Came home to find man in my apartment, called police, they told me to call back later. I repeated he was still in the apartment. So they were all “oh! Guess we’ll show up then”. The guy took off and they didn’t get him. They told me their arrest rate on burglary is close to 0.

We don’t have to have a political discussion in the comments, but if you want to tell us what your experience with the police and reporting crime has been, we’re all ears!