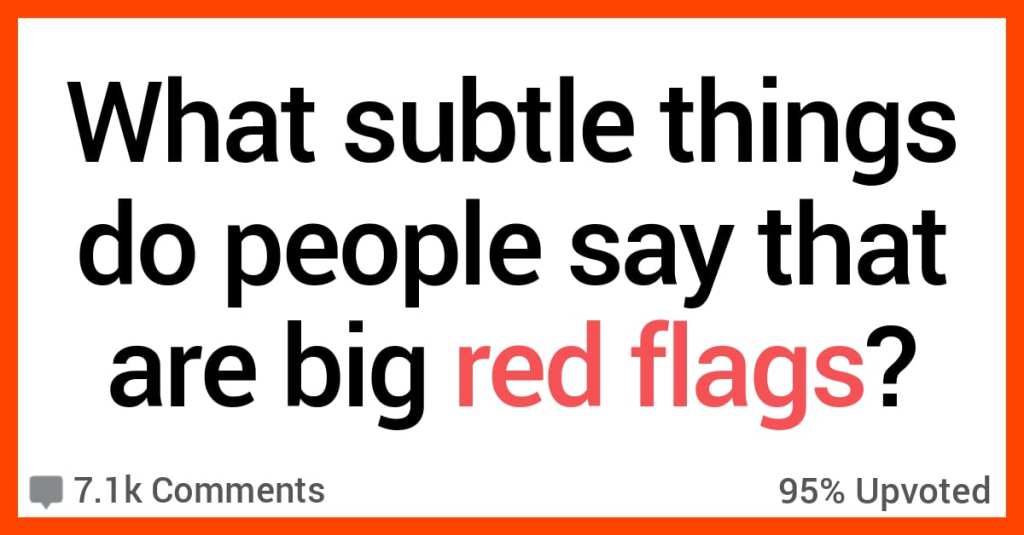 You gotta pay attention or you might miss something…

I’m talking about when you have conversations with people and they drop little hints that should make you say, “uh oh…I’m not sure if I want to have anything to do with this person.”

1. A terrible thing to say.

Literally heard this s**t my entire childhood. I got told I act “too white” because I enjoyed reading books.

“When people say things like “I can say and do whatever I want” “it’s a free country. Ever hear of freedom of speech?” in order to justify s**tty things they say or do.

“S**t talking other people (who aren’t there). Sometimes it’s fair.

But it does tell me there’s a lack of respect, and if they’re s**t talking a lot of people, I’m pretty sure I’ll be next on the list.”

4. Get ready for a lecture.

I find most people that say that are open to lecture you, and closed to debate.”

“When they disagree with someone, they default to attacking the person’s character instead of their actions. We all do this from time to time, but with some people it’s every time.

The guy who messed up their order is “an idiot”. Their boss is “an evil sociopath”. The person on Facebook who expressed a political view that opposes theirs is “a degenerate”. That new intern at work is “hopeless”.

In the end, the final result is that anyone they disagree with for any reason is either an inherently bad person who doesn’t really merit listening to.”

“When I started my new job the bubbliest girl who was loved by most of the staff and was also a HR manager would act like this when me and her were totally alone.

She would whisper ever so softly (to herself but to me) “you get no thanks around here, no one cares. You just wait and watch the knives stabbing when you least expect it”.

This is something she did on my first DAY!! I said to her everyone seems lovely and accepting and she said “well wait until you get to know them”.

This was the HR MANAGER!!”

“When someone says “they’re my karma child” and implies their child makes their life so hard it must be payback for a mistake they made in the past.

I usually discover this person has intense mental health or substance use history. It’s a s**tty way of mentioning their disdain for their kid.”

““I’m an empath” makes me want to get in my car and drive ten hours in the opposite direction while shoving wool in my ears.”

“”With all due respect.”

I know a guy who says this so frequently that when he says it, I brace myself for the s**t to follow.”

“Doesn’t hurt to see what’s out there”.”

“I live in Canada.

My husband is a white immigrant with a charming accent.

I instantly h**e anyone who makes a comment about how they don’t mean “immigrants like him” when complaining about immigrants.”

It’s good to have a strong sense of self but I’ve found when this exact phrase is stated/listed something ain’t right.”

“When you’re on a date/dating someone, and they incessantly bring up their ex.

This means two things: they’re still stuck on their ex, and they will always compare you to their ex.”

“Not having basic manners as in please and thank you to service persons.

Are there certain things that people say that you think are red flags?