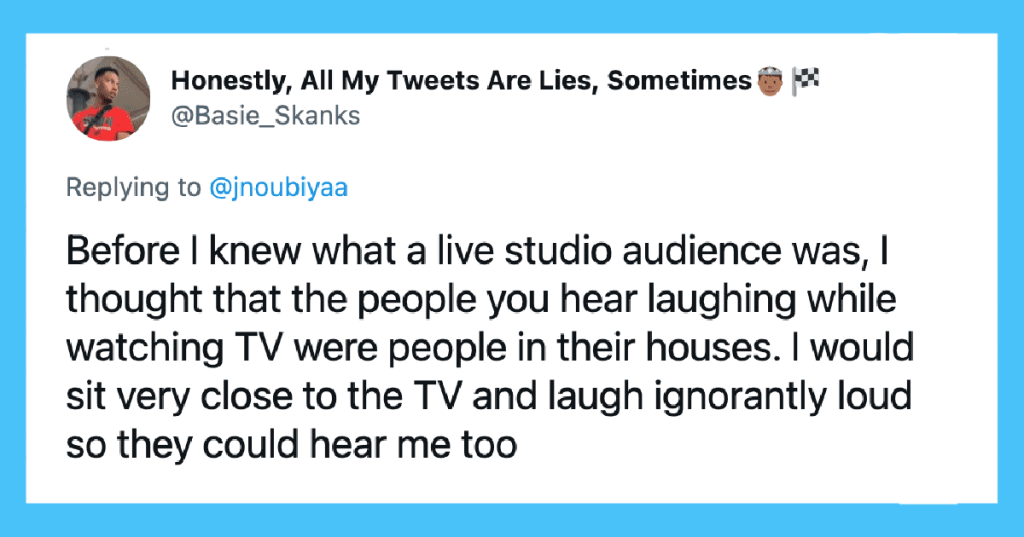 There are some things about life that just don’t make sense until you have some knowledge, years, and experience under your belt, but looking back, it can be pretty funny how something relatively simple made absolutely zero sense to you as a kid.

If you’re ready to laugh with some people looking back at their childhood selves and shaking their heads, these 14 folks are sharing some hilarious takes!

It does devalue the whole thing just a little bit.

My cousin one time was singing a song and I heard it on the radio the next day.. I was so proud of him thinking it was his song lol😅 how disappointed i was when i found out pple were allowed to sing songs they didn’t write.

13. I hate everything about this story.

Don’t do this to your kids, people.

I had a crying, hyperventilating panic attack when I was like 10 because I had masturbated and thought that meant I was going to hell. My very religious aunty was confused, worried and kept asking me what was wrong but I was ashamed and inconsolable.

12. What else would she think?

I hope that mom got some privacy before the main event.

When I was 5, my mom came out into the living room while I was playing games, crawling around merging ungodly noises. I thought she was being silly, so I crawled with her and tried to like ride her like a horse.

She was in labor. I was like "lol that's cool"

It would make things so much more interesting.

These examples are super funny.

9. Now that would be commitment.

I used to think when an actor died in a movie, they were permanently dead.

8. Has the doctor ever shot you before?

My land, no trust!

When I was 6, my parents told me I had a doctor appointment so I would leave early from school to get a shot and I thought it meant that I was going to the doctor to literally get shot 😭

7. I think it’s so cute when kids get mad they weren’t included in your life before them.

when i was like 5 or 6 i saw my parents wedding tape and PISSED i wasnt invited! Telling my dad i am ur son, ur first born son and u had my cousins there and not me! Thinking they just left me at home and got married, when i really wasnt born yet lol!

That’s something kids do well.

When I was super young we went to church and I couldn't see over the pews. It was a catholic church, I remember them ringing the little bells, and not long after some women walked up front to help with the wine, well a baby started crying. I thought these people were sacrifices😂

5. Their parents probably thought they were mental.

One of the perks of having kids is laughing at them.

Before I knew what a live studio audience was, I thought that the people you hear laughing while watching TV were people in their houses. I would sit very close to the TV and laugh ignorantly loud so they could hear me too

4. This is devastating from the kid’s perspective.

No wonder they cry!

My mom got me ready one day in the morning and didn't say where we were going. Went to a building with lots of kids, I start playing & then I saw my mom speed walking out the building. I started bawling thinking I was being abandoned. It was day care.

3. They should have just had a chat.

Her mom definitely had no idea.

Nah because when I was little, my mom would take me to the doctor and I would see her fill out the little chart, and when I saw the “sex” part (asking about my gender) and she circled “F” for “female,” I thought it meant I had sex “Frequently” and I got mad because she was lying

2. There are no secrets once you have kids.

I’m going to have to remember it.

I remember when my dad told me that cheese with holes in was called hiccup cheese, because the cows had hiccups when they made it. I carried that until I was 18. Got laughed out the pub.

Told the story a couple years later, I was laughed at again for thinking cows made cheese.

Man, childhood was the best, right?

You could be clueless and people thought it was cute!