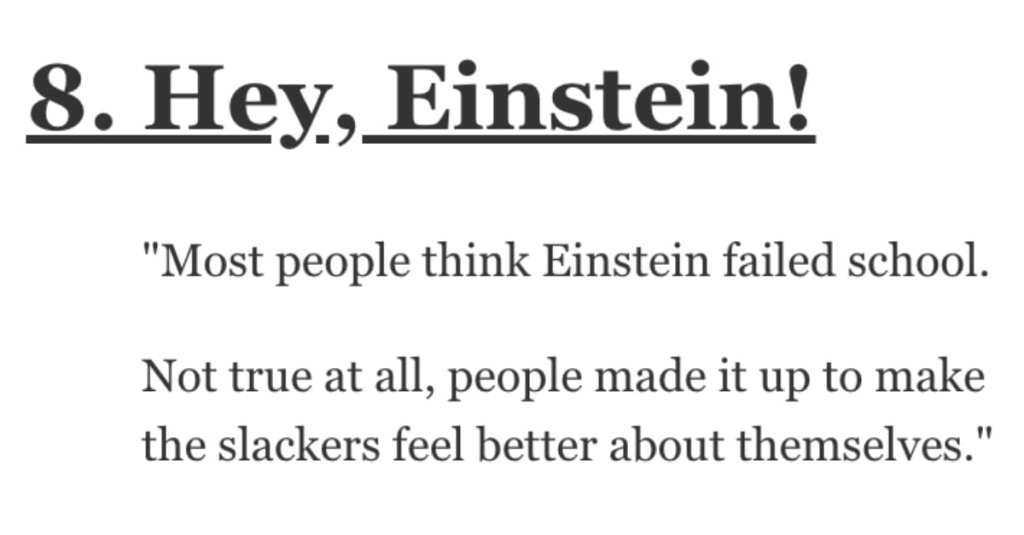 I am so sick and tired of hearing the term “Fake News” yelled out when someone doesn’t agree with something these days.

Yes, I understand that there actually is fake news out there, but this term (and mindset) has been adopted by so many Americans now that it’s actually very dangerous.

Even if something doesn’t align with your belief system and worldview doesn’t make it FAKE. But, then again, there are some “facts” out there that everyone subscribes to that are probably total BS, so what do I know?

AskReddit users talked about widely accepted facts that they believe are totally wrong.

“The Kitty Genovese murder was a case of gross apathy.

There weren’t that many witnesses, people did intervene and did call the cops. Sophia Farrar, who passed away yesterday, at risk to herself, ran to Kitty Genovese’s side to comfort her in her last moments.

Note that this incident is what led to the formation of theory of the bystander effect.”

“Gladiators did not kill each other.

The sport was much more civil and it even had a referee.”

“That carrots help with your eyesight.

It was propaganda by the Allies in WWII to hide the fact that they had radar.”

“Breakfast is the most important meal of the day. Oh my God aarrgghhhhhhh!”

“When you have a nose bleed you should put your head forward, not backwards, otherwise the blood runs down your throat and can choke you.”

“That Hitler was vegetarian.

He wasn’t, it was propaganda spread to make him seem a more compassionate person.”

Not true at all, people made it up to make the slackers feel better about themselves.”

“The pilgrims came to America IN ORDER to religiously persecute, not to escape from it

The UK wouldn’t let them persecute so they left.”

“ADHD is NOT an overdiagnosed myth to control energetic kids. There’s an incredibly common version called “inattentive type,” which goes MASSIVELY underdiagnosed– because the people who have it aren’t a disruption to the classroom, just themselves.

Were you ever “so smart, but you’d forget your own head if it wasn’t on your shoulders”? Do you get so into projects that you forget to eat for hours? Is it impossible for you to correctly estimate how long anything takes?

Do you go through VERY intense phases of being super into a craft/game/hobby, then forget it exists? Do you start WAY more projects than you could ever finish? Do you frequently lose or forget things that you swear to God were JUST there? Did you skate by in school on raw intelligence, but never learn to study?

Congrats! If most of those feel familiar, you might have inattentive-type ADHD. It’s especially likely if you’re a woman and/or always got good grades in school. Because again– you’re not disrupting the classroom and you’re clearly capable in some way, so the disorganization, tardiness, mistakes, etc are drilled into you as being a moral failing.

Hoping at least one person who sees this recognizes “wait, that’s me!” and gets some help. I figured it out on my own at 20 from reading a blog post and I want to pass it on.”

“If you touch a baby animal its mother won’t come back for it…. objectively not true in nearly every case.

Similarly, people think all reptiles are bad parents who just drop their eggs and leave.

Nope. Lots of the time, yes. But not all, certainly not crocodilians.”

“Organic agriculture is good for the environment…..

…..it is in fact just as bad, and sometimes worse than conventional farming.”

“Lots of people are overweight because of their “slow metabolism.”

The truth is the heavier you are the higher your basal metabolic rate is in order to maintain that weight.”

“Here’s the lowdown on hair (hairstylist of 10+ years here)

There’s no such thing as “dead ends.” Your entire strand of hair is dead. Your ends can be dry, or split, but not dead.

Everything else is based on genetics. From density, texture, growth rate, how long it’ll grow overall (terminal length) and how strong it is, is all genetically determined. Therefore, everyone’s experience with cutting/growing will be different. And this changes over time as people get older.

Some hair gets curlier as the hair gets shorter. Also, hair texture can change with puberty, pregnancy, age, and medications, which can cause hair to get curlier or straighter. See how many potential variables hairstylists have to work with? What fun!”

Do you have any strong feelings about “facts” that you think are wrong?