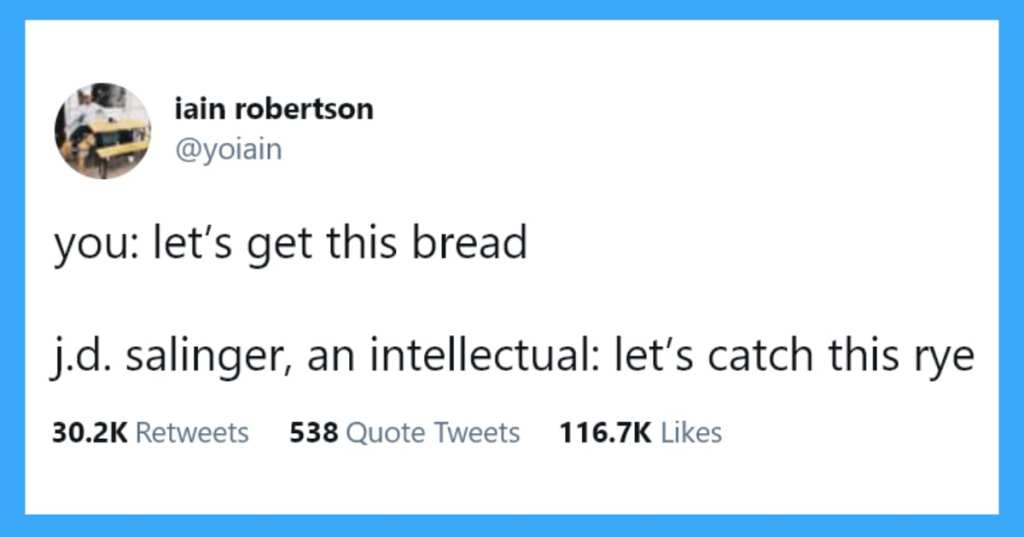 Book people are the best people.

They’re also my people, which is why I’m so excited about sharing this list of funny, insightful, pithy tweets about our very favorite things.

Book people are also also hilarious, as is evidenced below – so get ready for a big ol’ grin that just won’t quit.

13. I feel like this would definitely get you an A.

ME: I will now give my Moby Dick presentation as a rap

TEACHER: I specifically told you not to d–

ME: His palms are sweaty, Queequeg's harpoon heavy, there's something on his sweater already, spermaceti

kafka: it's a coming of age story

kafka: about a boy who's changed, but his family won’t accept him

kafka: because he's changed into a bug

editor: there we go

11. I’m pretty sure this is historically accurate.

HARPER LEE: I don't know what to call my novel

HARPER LEE [picking up a gun] ok I have one idea

10. Seriously what was wrong with him?

John Steinbeck writing the ending to Of Mice and Men https://t.co/d0lWWlmSlV

9. I just groaned and snorted at the same time.

8. Strictly speaking there’s nothing wrong with old books though.

ron weasley: i have to use old books

ron: and torn up shitty clothes

ron: would be crazy if my best friend had a vault full of gold and could maybe help me out a little

harry: ya lmao that would be crazy

I [35M] married a woman [32F] from a slave-owning family for money. She had mental illness and cheated on me, so I removed her from home and loved ones and chained her in an attic. Now I want to marry an employee [18F] without telling her I’m married because she’ll say no. AITA?

6. Some of us have made real accomplishments in this life.

Before you turn 18 you have to choose exactly one of these books to read and then never stop talking about for the rest of your life:

so you mean to tell me , Willy Wonka sent golden tickets AROUND THE WORLD, and 5 WHITE children got them all?!?!!

1. No way this dude had friends.

you: let’s get this bread

I love each and every one of these, and also think I need to step up my Twitter game!

Which was your favorite? Share with us in the comments – and tell us what your favorite book-related account is while you’re at it!