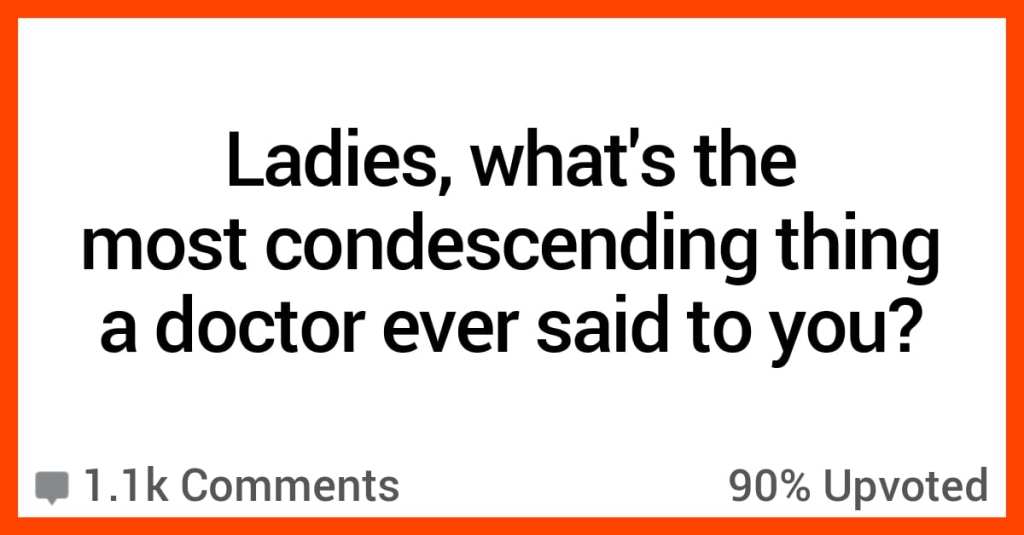 If you’ve been paying attention, you realize that everyone in the world is not treated the same by people who are in positions of power and authority. Whether you’re a person of color, someone whose religion is in the minority where you live, an immigrant, a woman, or some combination of the above, one of the places you likely hear less heard is in the doctor’s office.

It’s one of the places you should feel the safest, the most able to be vulnerable without anxiety, but for women like these 15, that’s not the case – and after reading through these horrible moments, I think you’ll understand why.

“One night, I was helping my friend unload her groceries, and I felt this excruciating pain. I didn’t know where it came from, but I knew that it was in my ovaries. After hours of just sitting in my house in excruciating pain, my husband finally talked me into going to the ER.

The doctor came in and said, ‘Oh, you have a tummy ache?’ I said, ‘No, my ovary hurts.’ After arguing with him about my ‘tummy issues,’ I had to go into emergency surgery because my fallopian tube exploded due to an ectopic pregnancy.” —@mrs.cford

14. This should not be allowed.

The doctor left, came back, and sat in front of me and said, ‘I refilled your inhaler, but I’m not going to be able to refill your birth control.’ I was kind of confused. I asked why, and he said, ‘Well, because it’s against my religion.’

Long story short, he ended up getting fired.” —@carefree_bee

“I got put on a new antidepressant, and I was on it for a month, and my doctor told me that it was supposed to kick in by then. And I was having really bad suicidal thoughts, so I went to the doctor’s office and I said, ‘Hey, this isn’t working.’ But my usual doctor wasn’t there. In walks this 50-year-old man. He tells me that I don’t have depression and that it’s probably teenage hormones, and then says, ‘Maybe exercise.’

“And then, two days later, I ended up in the hospital because I was going to commit. I had to talk to so many different doctors, and one walks in and asks, ‘Are you taking any medicine?’ And I said, ‘No, just Wellbutrin.’ While I was sitting there crying my eyes out because I literally wanted to fucking die, he looks me in my face and says, ‘You’re not taking acne medicine? You know you can see a doctor for that, right?'”

“I was a junior in high school, and I was going to a swim meet because I was a swimmer. I started having horrible, severe stomach pain. I wrote it off as having cramps because I was on my period at the time, but it got so bad that I couldn’t stand up, talk, or move.

So my mom took me to the ER, and the doctor came in and was like, ‘Oh, you said you were on your period, right?’ He didn’t do any scans or anything — he just wrote it off as period pains and that I was pretty much just a pu*sy.

Turns out, I had ovarian cysts that popped, I was internally bleeding, and I was going into sepsis. And now I have so much scarring that I can’t have kids.” —@trashfire42069

I went to the gynecologist to get a checkup and also check on some possible PCOS symptoms. He mentioned, ‘Oh, you’ve gained a lot of weight since your last visit,’ and then said, ‘Well, you know what you could do? Just chew your food, but don’t swallow it. So anytime you get tempted by what you wanna eat, just chew it and then spit it out. That way, you get to eat what you want, but you don’t get the calories, because we want to see you lose a few pounds before your next visit.” —@operantics

10. How about we “just sit” on your reproductive organs?

“I was 22 and started having really bad pain in my right lower abdomen. I was on my period at the time, but it got so bad that I thought it was appendicitis.

I went to the emergency clinic, got checked out, and they said, ‘It’s not appendicitis, but we’ve found a rather large cyst on your ovary.’

And, so, the other male doctor said, ‘You know what? I just really don’t understand why women find ovarian cysts so painful. It’s just sitting on your ovary.'” —@ashtree252

9. Throw the whole man away.

“As I was delivering my daughter — I mean, pushing her out — the male doctor popped up his head from between my legs and said, ‘Do you work out? Because you’re really tight.’

Why did he have to do that? I can’t get it out of my head. It lives there rent-free and will probably be there for all of eternity because it was so disgusting.” —@kellykru

8. Paid for not working.

“I have a lot of really bad back issues, and it got to the point where it was just so painful, I went to a doctor for it. He gave me some X-rays and said, ‘Yeah, your back is perfectly healthy, it doesn’t matter.’ And I was like, ‘Okay, then tell my why I can’t lay down at night? This is horrible.’ He said, ‘It’s just your muscles,’ and gave me muscle relaxers.

“Well, surprise, surprise, they didn’t work, and earlier this year it got to the point where I’d slipped a disk. I got an MRI to see if it was just a slipped disk, and guess what? I have nerve damage in the part of my back that he was supposed to X-ray and diagnose, but didn’t.” —@average_art_teacher

“One time, I threw out my back so badly that an ambulance had to come and take me to the emergency room because I couldn’t walk and was in soooo much pain. When I got to the ER, the doctor refused to do any X-rays, CTE, MRI, nothing. His reasoning was, ‘Women just have a low pain tolerance,’ and that at the time I was in my late twenties and extremely fit and healthy, so I must’ve been fine.

“It’s been 10 years of excruciating pain, trying to find a doctor who takes me seriously, and I’ve finally been in to see an orthopedic surgeon. He was absolutely shocked and couldn’t believe I can still stand upright and walk around. I now need to have major surgery on my back, which could have been avoided if it was taken care of properly 10 years ago.” —@sandramaykirk

6. Was he having seizures the entire time?!

“Three years ago, I was in a very bad car accident. I hit black ice going 75 mph. Luckily, the only injury was a very smashed collarbone and fear of driving. I obviously had trauma surgery to repair my collarbone because it was in pieces.

A few days after, I had a post-op with my trauma surgeon, and he told me three things. One is that the nurses were pissed that they had to hold my ‘fat’ arm in the air during surgery, and he said it looked like a ‘ham hock.’ He then said that most women get the plate that’s put in place during surgery removed, but I was so fat, you wouldn’t be able to see my collarbone anyway, so it didn’t really matter if it was attractive or not.

And three, he kept on insisting my dad was my husband, which was disgusting.” —@h8jordie

5. The weight thing needs to stop.

“I went to see a male OB-GYN to tell him that I was having 70-DAY-LONG PERIODS. It was so bad that every time I took a shower, I had to push the blood out of the way so that the water would drain.

Come to find out, my uterus prolapsed. It was FALLING OUT. I also had endometriosis, and as a result, it was literally pulling my organs out through my you-know-what. This male doctor told me that it would all stop if I lost weight. I was dying.” —@yourgayauntbutwithmakeup

“About seven to eight weeks into my first pregnancy, I started bleeding and cramping. So my husband and I went to the emergency room.

After about three or four hours, the male doctor came in and said, ‘Well, there goes that baby! That just means you get to try again.’

We had been trying for two years at that point.” —@heythereheatherbear

3. I love that they made HIM call.

“I was in the ER for the second time in two weeks, and had been there for about 11 hours. The doctor came to my bed, leaned against the wall, crossed his arms, and told me that I had no valid reason to be in the ER and to not come back. He said I was a perfectly healthy young woman and that I shouldn’t worry about anything.

As soon as I got home, he called me and said, ‘I’m so sorry, someone else looked at your scans. You have to come back right now. You have a brain tumor.'” —@delaneyscott7

“In 2016, I had an ectopic pregnancy. The surgeon who performed my surgery did a really great job, and he was even able to save my fallopian tube. This year I went to an OB-GYN, and I was talking to him about some symptoms that I felt matched polycystic ovary syndrome, or PCOS.

He talked to me like I was SO dumb. I’ve had one, dude, the surgeon explained everything to me.” —@theexdaisy

“I had to see a pain specialist because I hurt my arm, and at the top of my chart, I made sure it was listed that I see a psychiatrist for my PTSD from being a child s^x-trafficking victim.

The pain specialist came in and told me that I no longer needed my anxiety meds, depression meds, or any kind of sleep meds because ‘I should be over it.’ According to this man, who never in his life experienced childhood s^x trafficking, or even believed that it exists, I should be over it.” —@chellbs7

As a woman, I can definitely confirm the anxiety that goes along with meeting a new doctor for the first time.

If you’ve got a story you could add to this list, share it with us in the comments!