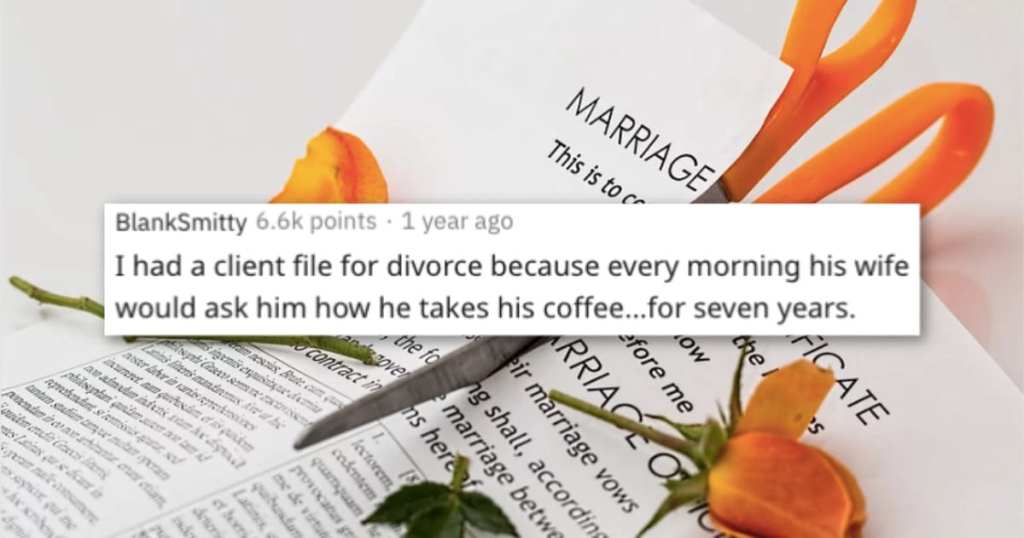 15 Divorce Lawyers Recall the Weirdest Reasons Their Clients Have Split

Out of all the professions in the world, I imagine being a divorce lawyer is one that keeps you fairly entertained.

I mean, it probably sucks your will to even attempt a long-term relationship, too, but you have to take the good with the bad at any job, right?

Below, 15 divorce attorneys are talking their clients’ weirdest reasons for calling it quits and just…wow.

15. Seems like he was just looking for a reason.

Lawyer here. One of mine that sticks out is that the husband and wife both played some sort of on-line role-playing game, sort of like the Sims I think but a little more elaborate and adult (‘Second Life’ maybe?). I don’t know anything about online games.

The wife got heavily involved with the game, like 10 hours a day, and wouldn’t reduce her time playing no matter what he said. What tipped things over the edge however was that he set up a fake profile/ avatar and went online to stalk her in the game and found her avatar having sex with some random guy’s avatar.

Nothing ever happened in real life (neither of them were exactly oil paintings to look at) but that was enough for the guy to initiate a fairy acrimonious divorce.

He loved his pinball machine collection more than her.

Also it turns out some pin ball machines can be worth a shit load of money.

13. I feel like the wife got the best deal possible, all things considered.

One client filed for divorce because he owed his bookie $70,000. He didn’t want to leave his wife but he figured he would get half the house in the divorce, which was worth $700,000 and pay his debts.

He had already blew through their life savings gambling.

He was the worst guy.

My neighbor filed for divorce because he smacked his lips when he ate and slurped his coffee and soup.

She thought if she didn’t she would end up in jail for battery.

I had two couples come to me.

They had been friends for nigh on 15 years.

The couples had near identical assets in terms of value. They came to me all together, and I drafted two sets of paperwork. Two default judgment hearings were set on the same day. The judge signed all the papers the same day.

A week after that, they all went to a JP and remarried. The husbands swapped houses and they all went about their lives exactly as they had the week before, but each slightly happier.

10. Definitely the reason Jerry Seinfeld would have gotten divorced (if he’d ever gotten married on the show).

9. None of this gives me any kind of hope for the future.

Hopefully soon-to-be-former Divorce attorney, I’ve seen tons of crazy reasons for people to get divorced. Some of them stupid, some of them make perfect sense.

I had one person get divorced because her husband wouldn’t take her out to the movies anymore. I had one client who looked through her husbands phone and found out he was hiring male escorts while he was on business trips. One female client got a divorce because she hated sex with her husband. Her last relationship before she got married was pretty intense and I guess her husband just didn’t match up.

I’ve had a few clients who were teachers get divorced because their spouses found out they were having indecent relationships with students. All of the teachers were female.

One divorce involved an elderly couple who had both recently been widowed. They had both been married to their individual spouses for over 40 years. They married each other out of loneliness. About two years into the marriage, they realized they made a huge mistake. They couldn’t stand each other. It was weird seeing eighty year olds complaining about the same thing you see kids arguing about.

My dad split my mom because “she takes too long to tell a story”.

But this was one of the main reasons he gave when they did a counseling session together.

7. I did not need this mental image.

Not a lawyer but a friend is.

They said the husband wanted a divorce because the wife still wiped the ass of the perfectly healthy and mentally able teenage son among other things.

6. Yet another reason to discourage abstinence before marriage.

Not a divorce lawyer, but there’s this famous case that all law students know about.

The wife asked for annulment of marriage, because almost a year into the marriage, they still haven’t had sex.

The husband has been avoiding it for almost a year, and later on the court found out that he actually only has a 2 inch penis.

My boss just got divorced.

His wife was telling people one of her reasons was the amount of toilet paper he used.

4. I feel like he should have just let it go?

Not a divorce lawyer, but have done marriage therapy. Had a soldier stationed at Guantanamo Bay that met a local. Fell madly in love. They decided to get married so she could come with him back in the states once his tour was done.

She was working on American dishes, and was making spaghetti. He comes home from work one day, and she’s making it. She puts the meat in, puts the canned sauce in, and then pulls an unlabeled bag out of the freezer and adds it to the sauce.

At this point in the session she’s hysterically crying with broken spanglesh. She’s trying to explain she didn’t know any better. Through the hysteria he informs me her mother and grandmother told her if she wanted to keep her man, she needed to put her menstrual blood in his food. It was so hard to keep my composure. I was trying to hard not to gag.

They both described they were madly in love, but he couldn’t let it go. They ended up getting a divorce. Having done this for 14 years, I have found it 100% accurate that truth is stranger than fiction.

Not me but my friend who specializes in family law.

Wife wanted to divorce husband because he kept taking their dogs for walks while she was at work, making it (unintentionally) so they’d rather cuddle the husband instead of her after a long day.

2. I don’t even know what to say about that.

Notable, she then wouldn’t accept any of our offers, and I continuously asked her lawyer to provide counter-offers…shouldn’t her psychic have told her how the case would turn out?!? Lol.

1. I would not have wanted to be in that room.

I’m not a lawyer but my brother is one who specializes in family law.

He once had a case where the client was divorcing his wife because he was having an affair with his wife’s mother.

Even after being divorced, I’m pretty awed by this list. Human beings are truly special, y’all.

Have you been divorced? Would your reasons have made this list?