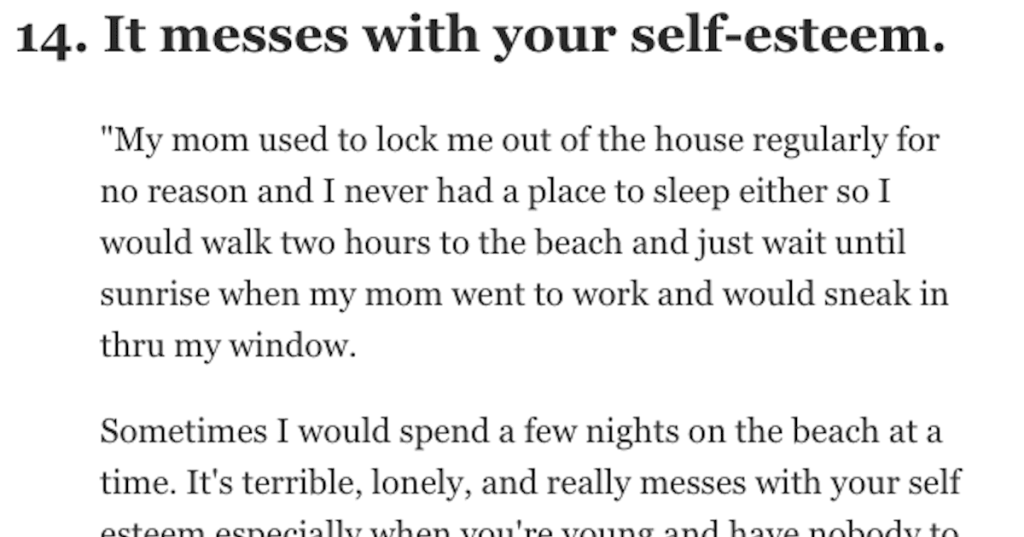 On any given night, over half a million people in the United States sleep without a home. They’re forced to rest in cars, parks, streets, abandoned buildings, or on friends’ couches.

Any kind of person can wind up in this situation, but homelessness is especially common for  those who are living paycheck-to-paycheck without savings – the financial reality for millions of Americans this year. Making it back out of homelessness can be incredibly difficult.

People on Reddit who have experienced homelessness opened up about their stories, describing their first night without a home, and how they were able to adapt to their new circumstances.

1. Mom said we were going camping.

“I was about 9 years old, and my mom said we were going on a camping trip. I didn’t really suspect anything, as it was summertime and we went camping a lot when I was younger.

Although I did wonder why we were packing so much stuff. After a few weeks of “camping,” I started to complain, but my mom kept insisting that it was good for us to get in touch with nature, etc.

Then school started, and we were still camping. And we kept camping for another 6 months. When we finally got a house, my mom cried with joy.

And we don’t camp anymore.”

2. “I remember being really hungry”

“I remember being really hungry and acting weird because of the low blood sugar, almost delirious.

This was when I made a futile attempt to run away from an abusive home with no money.

I ended up going back because of that.”

3. The police escorted me to the shelter.

“Sleeping in my car wasn’t that bad. It was summer, so it was pretty warm which was my biggest issue.

Showered in the gym, and spent most of my day at the library before going to work.

For the first few nights it wasn’t bad. However one night police found me sleeping in my car and escorted me to the local homeless shelter, which was one of the most terrifying nights of my life.

Since I’m lying there in a top bunk, when a huge argument breaks out because one guy breaks out some meth, wouldn’t share it with a second, then a third got pissed and started screaming at them to be quiet because he needed to sleep.”

“I was kicked out by my mother at 16 and spent 2 months homeless before the local authority placed me in foster care.

I think what hit me first was how my own mother could make one of her own children homeless. I felt like the least favourite of her children – it all came out of nowhere, I racked my brain for years after, trying to think of what I might have done in particular.

Also the crippling loneliness you feel when you are trying to get hold of people to ask for a place to sleep for the night. I could not feel more alone in the world when someone would either not answer my message or tell me they were busy.

I’m pretty sure I camped out in the park that night. Didn’t sleep at all.”

“It was terrifying and cold and hungry. I didn’t sleep a wink.

I adapted over time. Extremely steep learning curve to surviving homelessness. Nothing really prepares you for it.”

“It wasn’t awful until it sunk in that it wasn’t going to change anytime soon. At first it’s just shocking. Like, blank mind shocking. How did I get to this point? Then it’s scary and surreal. AND I had my kid with me…so I was busy keeping him safe and fed. Awful came about a month into it.”

“I kept waking up in the middle of the night and would start walking “home”.

I’d get a few steps then stop and realize I had nowhere to go and turn and walk back over and lay on the ground.

The ground is very cold and I felt a lot of shame.”

7. How cold concrete can be.

“I slept at a Catholic Church across from my high school so I could still make it to school and graduate early.

I remember feeling really sad because I slept where they put peoples ashes, and I remember being so sad that those people could comfort me in death more than anybody alive. I used to talk to them, if there’s camera footage I look insane.

I never realized how alone I was in the world until I was homeless.

And I never realized how cold concrete can be, it chills you right to your bones and is painful.”

“I started being homeless at 19, a previous foster parent put me out for coming home from college one night, and I had called up a friend last minute.

When I started to realize I wouldn’t be able to crash or stay anywhere, I am fairly certain I started to dread, and spiral into a constant, underlying depressive state.

All I could think about was “am I going to die like this? Do I matter? Will no one help me? I’m sad, I’m scared. I don’t want to feel like I have to beg. What if I’m stuck like this? Is this really my life right now?”

9. Hours upon hours of nothing to do.

“I was getting high, so it really didn’t truly sink in until I was broke and dope sick.

Then the desperation started.

Going to gas stations jumping car to car asking for money. Stealing what I had to. It was a miserable existence.

There are so many things you don’t think about when your not homeless…taking a shower, washing your clothes, and the boredom. Hours upon hours of nothing to do. And the constant noise.

There was nowhere to go where it was truly quiet.”

“I didn’t really realize what was going on, I was about 6-7 at the time. Dad said we were going to go for a drive and to pack my backpack with all the clothes I could fit and one toy. Mom was just crying. Me and my brother sat in the backseat, he was a little older and was holding our Sega Genesis and looking scared.

We drove for a little while (it was already getting dark) and we parked in front of a Walmart and dad said he had to rest for a while. Was the first of many….many nights we slept in the car.

I remember one of my parents was always awake, with their hand in their coat pocket. Looking back it was obvious they had a gun for protection, sleeping in shifts.”

11. No one wants to let you use the bathroom.

“Its terrifying at first. You feel so unsafe.

I was a teenager, and wasn’t willing to close my eyes and sleep on a park bench alone. So, I went to a local shelter and lied about my age. The forced me to shower and do a pee test. It turns out the women in that shelter were scarier than the street so the next night I didn’t go back. I slept in a park but ultimately made squatter friends and stayed with them. It was very much a community and I felt safe and loved there.The biggest problem with being homeless in the city is no one wants to let you use the bathroom. Even park bathrooms are locked.

Squat peeing in between cars can be done quickly and undercover, but when you get your period it’s a nightmare.”

12. The first night was miserable.

“I was homeless for a couple of months a year or two ago. I had a car and a low paying job so I lived in the woods in a tent for a bit.

The first night was miserable. I ended up sleeping really uncomfortably in the passenger seat of my car and it was a really cold night. After that I got a tent and slept on an old climbing pad i had. The first night was hell but the next several weeks were actually not so bad. I had a spot in the woods where I was well hidden and would cook over a fire.

I really didn’t have it that bad but it gave me quite a bit of sympathy for people who really do end up on the streets in a much more desperate situation.

13. We climbed up the slopes of a mountain.

“First night my wife and I landed up sleeping outside we slept in a local park that I knew. We had come down from the countryside with a few bucks (enough for 1 meal maybe) and had hoped to stay with a friend. He was unable to give us a place to stay, so we had to sleep outside.

After the insecurity of that 1st night I told my wife that we have to find a safer place to sleep, so we climbed up the slopes of Table Mountain (about a 1 hour walk) and found quite an obscured spot amongst some bushes and trees. We cleared it out of sticks and rocks, made it a bit habitable and then went make to the city looking for work. We’d spend the day going from one place to the next looking for work until it started growing dark.

Then we’d head up the mountain to our little spot for the night.”

14. It messes with your self-esteem.

“My mom used to lock me out of the house regularly for no reason and I never had a place to sleep either so I would walk two hours to the beach and just wait until sunrise when my mom went to work and would sneak in thru my window.

Sometimes I would spend a few nights on the beach at a time. It’s terrible, lonely, and really messes with your self esteem especially when you’re young and have nobody to take you in (I didn’t really have friends she prevented that).

I’ve been solicited for s*x tons of times by grown men when I was 14/15 and was terrified the first few times but quickly learned that being meek gets you in bad situations so I would bring a knife with me and tell at them.

I’ve learned a lot from those times and I hate remembering the loneliness and the hopelessness. I felt like I could’ve died and nobody would’ve cared or even known who I was.

It’s a sad feeling knowing that if you disappeared nobody would come looking for you or even care.”

“I don’t think it all really hit me until I had to choose one night between food and blankets because the temperature was expected to drop down to the mid 30s.

I only had one somewhat thin blanket at that point.”

Wow…. those were some really harrowing stories, right?