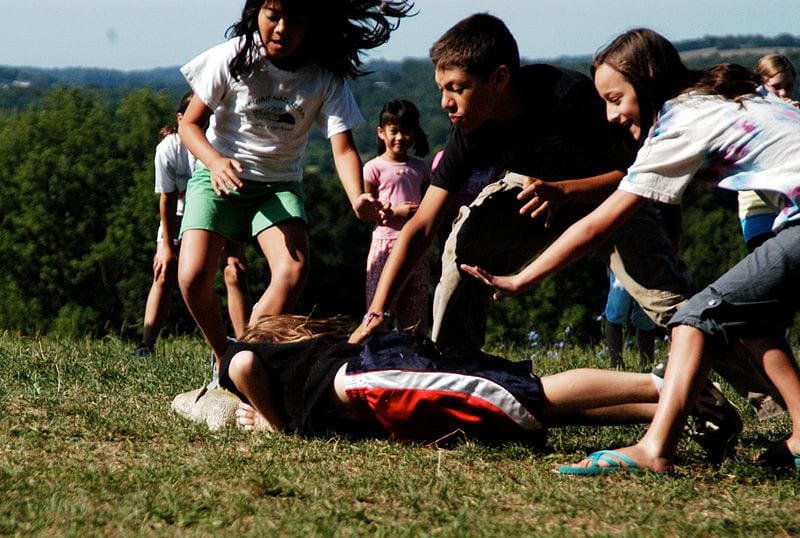 Okay, this is about to get weird. When I was a kid, we used to play “Killer”. One person was the killer and had to hunt down everyone else. Normal, right? Hmmm, not really. But the point is we all play “unique” games when we’re growing up.

AskReddit users shared the games they played growing up and there are some pretty good ones in here.

“We made up a game called camera tag. Basically hide and seek but It would have to be in the dark, and you have to have a camera. If you spot someone, you have to take a picture of them with the flash on. If they’re in the picture they get caught and they’re out.”

“We would take dad’s snuff can full of rocks and tape it shut.

Then we all face the same way as a designated person threw the can way out in the open pasture at night. All players set out to find it and if you picked it up and made it back to the “finish line” it was a point.

The rocks were audible if shaken. If you were able to tackle the runner before he crossed the line…. no point and re-throw.

First to 5 wins or first to break a bone loses.”

“Me and my sister would play ‘color copy’ where one of us would draw a picture and the other would follow along on their paper.

They’d inevitably both be shitty, but surprisingly close!

It’s almost akin to those wine and painting things where 13 women down a few bottles of wine and all paint the same tree.”

“Bockey” or “Bike-hockey” even though only one person was on a bike. There were three of us, so the game was played 2v1.

The two people are on roller blades with hockey sticks and a ball (a hard plastic “street hockey” ball). The one person was on a bike.

The object of the game was to shoot the ball between the wheels of the bike. If we got it through, we got a point. If he blocked it with his foot, he got a point. We had a ~50 yard stretch of our street we’d play on. We actually used to set a timer and play for three five-minute periods.”

“My sister and I created The Slug Wars. Basically, two combatants got backwards into a sleeping bag so their feet were hanging out of the head hole.

Then … you blindly battled to the death. Great times.”

“My cousin and I were convinced that his neighbour’s house has diamonds in the garden. We found a bunch of shiny diamond shaped things in their yard scattered in random places.

We used to dig up the dirt hoping no one would notice to find more of these diamonds. I think we found 10 and we split them in half. We would come back again and again looking for them.

We made a promise not to tell any other kids or our parents about them.

One day my mom found one of my ‘diamonds’ in the pocket of my trousers and asked me if she should throw it. I was shocked!!! Why would she throw away an expensive diamond??

Turns out, they were glass teardrop pieces of an old chandelier they threw away. I was so disappointed because we even planned to buy a Lamborghini with the money.”

“My brother and I would throw a bouncy ball at the stairs and then try to be the first to track it down.

This kept us busy for hours.”

Someone would go into the furnace room, shut the door, and they were in the elevator.

The rest of us would rearrange the family room, and bring in different props to demonstrate that we were on a different floor.

We changed outfits, accents… we played this for a good year.”

“My horses.” Whenever we were on a road trip, or honestly on any sort of drive, my family would try and spot horses before anyone else did. You had to shout “MY HORSES!” and then count them. It was a running tally but no one ever really kept score once the trip finished. Whoever had the most was the winner.

There was a way to get back in the game however. If you drove past a graveyard or church cemetery, you could yell “ BURY YOUR HORSES!” and everyone who had horses would go back to zero except the one who spotted the cemetery.

It was a cutthroat game and if someone had a lot of horses (i.e. just drove past a farm and brother has 13) then the whole family would be on high alert looking for cemeteries. It was a fun way to pass the time.

I’ve unconsciously played the game in friends cars because I’m so conditioned at this point and it scared the shit out of them haha. It was dead quiet and we drove past a farm. I ain’t giving up this chance to get ahead. Got my friends playing it now and I’ll keep the tradition alive.”

“My grandma had a bunch of huge novelty size balls of yarn when I was growing up. I’m talking these things had to have been like four feet in diameter with yarn as thick as my child arms. And what my grand ma would do is unravel the yarn balls and stick one of our toys in the center and then yarn the yarn ball back up nice and tight and the toss the yarns balls in the back yard. The idea was we had to get the toy out of the center, but we weren’t allowed to use our hands to do it.

Our hands would be tied behind our backs so we didn’t cheat. We’d be out there for hours hurling our tiny bodies at these giant yarn balls trying to unravel them and get to that sweet, sweet toy in the middle and me and my sister would work together where she’d find a long branch and use her mouth to fish it down the back of my shirt and into my pants and I’d hold the branch with my butt cheeks and so with the branch sticking out, I’d kind of be like a human fork. We usually made good progress with that move, but that yarn was so heavy.

Sometimes we’d succeed, sometimes we wouldn’t, and when we didn’t, grand ma would walk outside shaking her head in mock disappoint, grab whatever loose end there was and unravel the whole yarn ball with one clean jerk. I miss grandma.”

“Oh man, I remember this fondly.

When I was eight or so, my brother, I, and my best friend played “the dark man game.”

It was hide-and-seek in my parents’ basement with the lights out. The person looking for the other two wore a glow-in-the-dark Skeletor mask, so the two people hiding could see him, but he couldn’t see us. It got really intense at times, trying to find your way in the dark and trying to be as quiet as possible. Also, my parents’ basement was unfinished, so occasionally you’d bump into a nail etc. Made it extra dangerous, lol.”

“It’s not what it sounds like but my cousin and I used to play the “underwear” game.

We would go into her laundry room which was in the basement with ample room, and both of us would grab someone’s used underwear from the hamper.

Then we’d fight each other trying to get the underwear over the other’s head.

Obviously it was disgusting and had to stop when someone caught us playing it.”

“Not sure how my two older brothers and I came up with the game, but I remember it being stupid, dangerous fun.

One of my older brother’s bedrooms had no windows, so if we put a towel under the door to block out the light, it was essentially pitch black in the room.

We also had one of those old film cameras that had an operational flash that would work whenever you hit the shutter button.

We also had a small rubber eraser, and that’s all we needed.

What we’d do is line up at one end of the pitch black room, and one of us would throw the eraser towards the bed, and at the same time another would press the flash button on the camera, which would fill the dark room in a brilliant white light for just a millisecond, just enough so we could see a freeze frame of where the eraser was in its midflight and where it might be landing on the bed. The image would be burned into our eyes as the room went dark again, and from there, and us being precocious young boys, would then begin our vicious, violent race to see who could recover the eraser first.

I think our parents finally put a stop to the game when one of my brother’s misjudged his initial launch angle after the flash went off, and dove face first into a jutting corner of the wall, as blood poured from his nose all over my other brother’s bed in the pitch black room while we fought over that precious eraser.

After that got shutdown, I believe we went into the living room after each grabbing a sleeping bag from the storage room, and we would each climb into one backwards, so our head was at the foot of the sleeping bag. Once we were all settled in our bags, then we began our brutal battle to the death. We called it Slugfest, and I believe there is an old VHS tape of Slugfest ’93 kicking around somewhere.

“The Bomb Game”. We threw a ball around and if you got hit, you had to lie on the ground for five seconds before returning to the game. My sister and I and our brother-like cousins would play this against our uncles and although I’m pretty sure if we actually kept score, we kicked their asses.

Eventually all the uncles and my dad joined in and the youngest uncle joined the “kids” team. He told us he “played The Bomb Game in high school” (my younger cousins actually believed this) and we wanted him on our team anyway because he was more like the biggest kid. It eventually became a family tradition… ah, back in the day when my family actually saw each other…”

“Our signature game was Loserball, which went like this.

Collect every ball in the house, so lots of tennis balls, bouncy balls, a few baseballs, etc

Scatter them in the playroom

Turn off the lights

Wholesome fun for everyone! Unfortunately I was the youngest so I was often the loser.”

So…. those are some very interesting games, right?

Do you and your friends/family play anything crazy like this?