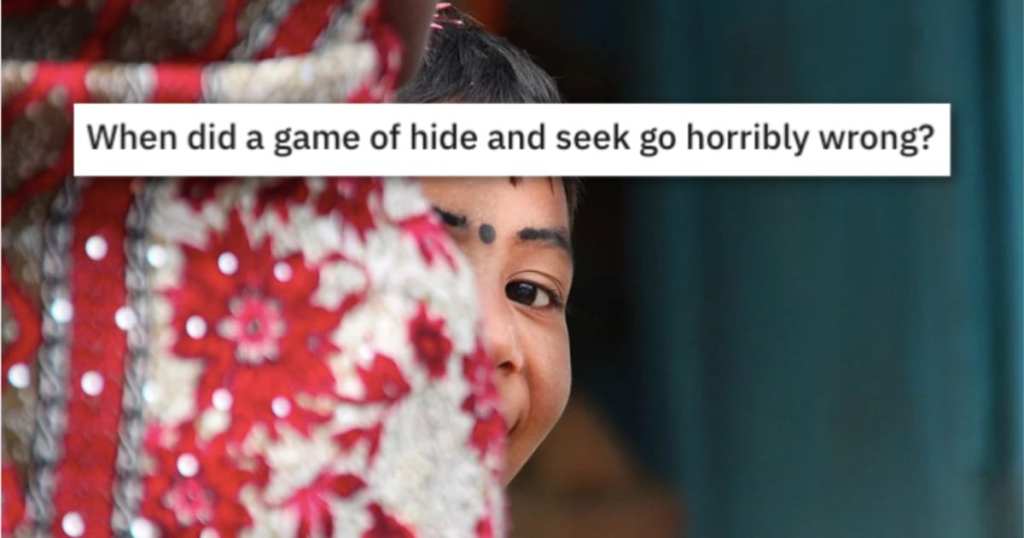 Hide-and-Seek is supposed to be a fun game. A children’s game, one that is fairly simple and easy to execute – and if you’re a parent, one that gives you hidden opportunities to each ice cream alone in a closet while you’re “hiding” from your kids.

I had a boyfriend in college who would get drunk and decide to play hide-and-seek without telling anyone, though, and would end up sleeping in a closet all night. And we’ve all heard the cautionary tales about the women who hid in a trunk in the attic, got locked inside, and was never seen again.

Here are 15 other stories about games that were supposed to be lighthearted and fun going horribly wrong.

While on leave in 1940, Niven met Primula “Primmie” Susan Rollo (18 February 1918, London – 21 May 1946)…Primmie died at the age of 28, only six weeks after the family moved to the US. She fractured her skull in an accidental fall in the Beverly Hills, California home of Tyrone Power, while playing a game of hide-and-seek. She had walked through a door believing it to be a closet, but instead, it led to a stone staircase to the basement

14. That was definitely the last day that kid babysat.

When I was a kid my two older brothers would always make me be “it”. One time the both hid in a trunk full of clothes. I was probably 6 or 7. So I decided to lock them in. Only I didn’t have a key, they panicked like crazy and were having trouble breathing.

The babysitter was going crazy. I think she broke the lock eventually. But it was some scary moments.

13. Wait, this is a real thing that people do in college?

I’m was a member of my university’s hide and seek club, and at one point the police were called however we had proper signage up, so the police warned us to stay out of a part of the building as they were looking for a suspicious person.

What neither the police nor we had figured out yet was that we were the suspicious figure that had been reported.

12. I mean I don’t see how that was really anyone’s fault.

My 10 year birthday party. My friends and I played hide n seek caterpillar edition. We put sleeping bags over us and wondered around in the dark to find each other. One of my friends lunges to tag another friend, fell and went top head straight into her face. Knocked out 2 adult teeth and broke her nose. Blood everywhere. She had to go and get surgery. Her parents threatened to sue my parents but eventually got over it. She was never allowed to come to my house again.

11. That could have been a lot worse.

Was playing hide and seek by a river while going camping. It was kind of dark out. Went to hide in some bushes near the river. When to step into the bushes and it was steep drop off into the river. Got completely soaked above my knees.

It took them a while to find me though.

When I was about 8 years old my little brother who was 6 at the time and my little sister who was 3 years old, were playing some type of easy hide and seek in my grandparents’ back yard. Well there are woods behind their house.

Our sister being a defiant toddler ran into the woods and my brother just saw her run in and ran in after her. They were in the woods for hours because she ran in so deep and they both got turned around. Our brother found a hunting post, climbed up it into the tree, and found a way out. They then knocked on doors, covered in dirt and scratched up, until someone answered. A woman gave them a ride back because our brother was able to point out landmarks to get back to our grandmother’s house. They got back while my mother was on the phone with the cops. They were discussing a helicopter to find them. We were ‘this’ close to a search party. They walked a collective two to three miles. They could have gone miles deeper into rural woods if they didn’t keep going one way and find the post.

So yeah watch your damn kids lol. Telling them “Don’t go into the woods” does not guarantee they will listen.

9. I have no idea why anyone would play this game in a restaurant but okay.

I was a waiter and some kids from a party I was serving played hide and seek and about five minutes later they had to come back because the chef came to cook (tepanyaki restaurant). There were two guardians looking after the children and one of them realised that a child was missing and freaked out it was like a mini man hunt in the restaurant (this was all done by the guardians since they didn’t tell anyone, I just overheard them and decided to watch what they would do) , after about 5-10 min of searching the girl comes out crying ‘they forgot about me’ she was in the bathroom the whole time and she was quiet when they called for her because she thought they were still playing.

8. At least you met your neighbors?

We had just recently moved into our neighborhood and my sister (5 at the time) was playing hide and seek with a neighbor kid. Long story short, kid couldn’t find her, all the adults started going around the neighborhood shouting for her, it was getting dark, after awhile my parents called the police….

Someone eventually found her and she said she did hear everyone looking for her but she was playing hide and seek so duh she wasn’t coming out until someone found her! Parents called the police back and told them not to come. That’s how we met most of our neighbors.

I thought I would be clever and hide underneath an abandoned vehicle in somebody’s yard ,it was covered with hornets nests underneath… I was the first one found……got 63 stings.

The fuckers chased me for a block, just like in a cartoon….cloud of bees behind me

6. He definitely won that game.

Had a friend who once hid in the trunk of his moms car, unknowingly she drove to the store which was pretty funny and a pretty good place for not being found!

5. I think most kids do this…once.

I managed to send an entire store on lockdown and freak out my entire family when I was maybe 5 years old.

My family was at Lowe’s, and I decided to take my Kirby plushie with me and hide behind some shelves or boxes, and see if they could find me. Turns out they couldn’t, and ran around outside because they thought someone kidnapped me. The entire store went on lockdown for a missing child, all the while I’m sitting, giggling and waiting for them to find me.

I eventually came out of hiding after my mom passed me, and got in huge trouble afterwards… I never hid in public again as a kid.

4. Maybe I’m terrible but this made me laugh.

If you ask me, when they started a new round because “everyone had been found” (except me) at MY birthday party.

3. That sounds like the start of a horror movie.

Before I was born my brothers and sisters played a game at my aunt’s house down by the river. My eldest brother decided to hang by his fingertips inside the water well. Meanwhile and unknowing of that fact my other brother thought about hiding up inside the little steeple cover of the well and to get to it needed to slam shut the well cover. LMAO.

Between fits of unadulterated anger interspersed with disbelief and worry my aunt, grandmother and mom managed to get him pulled up which wasn’t easy because with all of those smashed fingers of his he couldn’t hold tight to a rope.

2. How you know your friend is a sociopath.

So when I was a wee kid and a scout, we played hide and seek in the dark. We usually played something like this every time the last 15 minutes.

It was a medium sized cabin, essentially. There was a lot of places to hide, lots of stuff just lying around. For some reason there was a coffin there and nobody, as far as I know, ever hid inside. Because it’s a coffin, and that’s just creepy.

But my smart ass hid inside it. Unlucky for me, another kid also looking for a hiding spot saw me. He decided to lock the coffin I was inside of.

Yeah, I had claustrophobia for quite a while afterwards.

1. It took this kid way longer to get bored than it does me.

I hid in a tree in the park from my dad. Big park, right in the city. I was up there for about 2 hours, he passed under me several times getting increasingly panicked and I was like “I’m not falling for that one!” Eventually I got bored and got down, apparently right before he called the police.

It wasn’t horrible for me, but he was really terrified.

I don’t really know how to respond to these, y’all!

What’s your best story like this? Can it rival any of these?

If it can, please tell it to us in the comments!