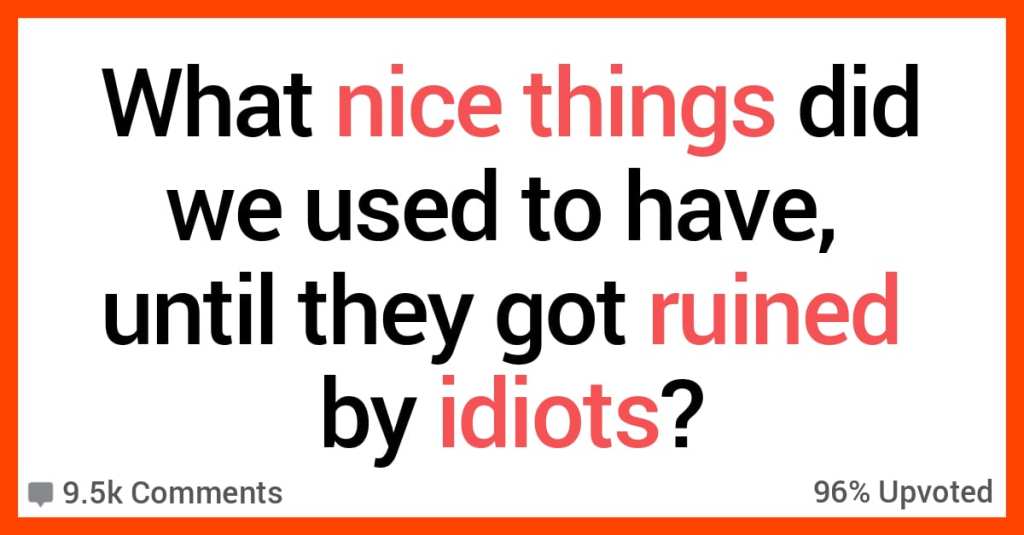 The phrase “this is why we can’t have nice things” is a common colloquialism, because it fits many different scenarios. For example, it can be used seriously, like when you’re reprimanding a toddler or a dog, or it can be used jokingly, like, say, when you kvetch over your significant other breaking something, because even grownups have trouble operating properly sometimes.

This list of “nice things” ruined by other people runs the gamut, but I guarantee you’ll find at least one thing on it that hits home.

(Drixoral) Dropped off the market when everyone switched to new decongestant formulas that were somehow more resistant to distilling into meth.

Oh, and anytime I buy decongestants, my DL gets scanned. Thanks, criminals!

* Or maybe the result of big pharma lobbying, trying not to buy into the conspiracy.”

All it takes is a few idiots doing stupid illegal shit like spying on people and legislators jump at the chance to restrict them.”

So now we keep the place locked up except almost exclusively during banking hours and Sundays mornings.”

#12. When Silicon Valley gets involved…

“Burning Man used to be a really cool, inclusive mini-society.

Now it’s just a bunch of people with WAY too much money, isolating themselves from other people in the desert by buying out huge plots of land, and excluding others from their clubhouses.

Which is a stark contrast from what Burning Man was fucking supposed to be in the first place.”

The rolly slides, teeter totters, the merry-go-rounds, and there was even a park I used to play in as a kid that had an old, retired train car we could go in.

The rolly slides apparently pinched too many fingers, the teeter totters were too hard to get off of and the merry-go-rounds were spun too fast.

As for the train, I’m pretty sure there were people shooting up drugs and/or homeless people sleeping in it.

Plus graffiti. Now it’s gated off and no fun for anyone.”

“I used to work at Tim Hortons and we were located right beside a homeless shelter, so every night, we would take all the food that was still fresh and give it to charity. It wasn’t a lot, usually like a box or timbits and about a dozen doughnuts.

Until one day, the regional manager came and shut the whole thing down. He didn’t tell us why, only to never do it again or we will be fired. We never questioned it and just held the resentment of Tim Hortons in our hearts, like how cheap do you have to be that you would rather have us throw away consumable food!

A few months later a homeless man came in right as we were throwing food in a garbage bag. He goes, “Ahhh it’s such a pity, I used to love eating your guys doughnuts until that fuckin idiot had to ruin it.” My co-worker said, “yeah that’s honestly fucked up, corporation greed, you know?” The homeless man gave us a weird look, he goes, “nah, that’s not what happened, one of the fuckheads at the shelter faked choking on a timbit and tired to sue this store, that’s why they cut us off.”

“Very dumb and minor, but I think it goes to show how selfish people can be.

A few years ago a guy on Twitter shared his Starbucks card information, and told people to put it on their phones. The idea was to have a shared/community card thing. Get a drink if you wanted to, or donate to it so others could get a drink. You would think that people would just grab free drinks, but it actually had a surplus of donations versus people actually using it. I think the card ended up with like $200 at some point.

Anyway, some asshole comes along and locks the card/account, effectively shutting it down. He said he did it because he wanted to prove how ineffective sharing was or something dumb like that.

You always have that one guy who sees other people enjoying something and feels the need to disrupt it.”

“In California, we used to have backyard pool slides until some drunk asshole hit his head goofing around and drowned.

His parents sued or advocated for greater laws restricting these.

Now they’re few and far between.

“My parent’s old apartment had this little dog park. Our greyhound loved it because she could go run every morning.

They closed it because people wouldn’t pick up their dogs’ poop. They would just leave piles of shit, despite management sending letters out.

I’m still salty about that one. Don’t get a dog if you can’t pick up their messes.”

“I used to be able to walk into an airport, book a flight, walk to the gate and get on the plane.

I have flown from SFO (where I live) to LAX (where my sister lives) countless times in just that fashion.”

“Our parents had a small summer cabin on a quiet, wooded lake. The water was pristine and ideal for fishing and swimming. The air smelled of fresh pine.

Then it caught on, and the lake became overtaxed and ruined with powerboats – polluted with gasoline, oil, and junk tossed into the water (tires, mattresses, washing machines, solvents, etc.)

Now, the fish are gone, the water stinks, and the pine trees have been cut down.”

“A sense of community in your neighborhood.

As a kid (2nd grade ish) I used to walk over to my friends and wemd play in each other’s backyards. We learned how to bike together, would “explore” the woods between yards, play with the older middle schoolers.

A lot of paranoia kinda ended that. The DC sniper shooting, fear of kidnappers, it all kinda hit at once. Well that and cicada season. After that summer people around here kinda kept to themselves more.”

Alright, so now that you’ve heard from those poor souls… do you hav anything to add?