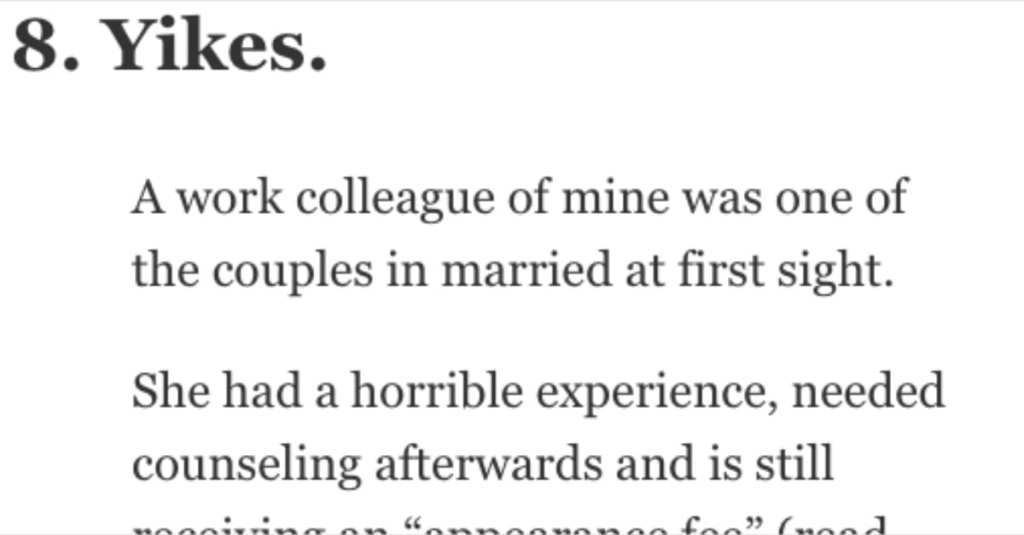 It’s not that hard to get into a taping of a television show, especially not the ones that use a live studio audience on a daily or regular basis. That said, if you don’t live somewhere like New York or Los Angeles, where television tapings are common, you might never have had the chance to see it.

If you’re curious about what happens behind-the-scenes at those tapings, these 15 people are here to tell you what they saw.

I was on Cash Cab. You can’t just hail a cab in New York which turns out to be the Cash Cab. There is a vetting process, but you don’t know you are going to be on the show so the reaction is genuine. Also, there is alot of awkward silence time while he is listening to the producer in his ear.

There is a cameraman riding shotgun unseen on TV. The money he gives is prop money for TV. They mail you a check after the show airs. Ben Bailey was genuinely a nice guy.

Was in the audience at a Food Network taping and Iron Chef America really is a 60-minute competition. That’s not fudged.

The judging on the other hand takes foreeeeever.

I was in the audience at the price is right. You wait like 4+ hours just to get into the taping. They come by and give you a short interview to see if you are a good prospect to make it to contestant row. I was with a group of 4 and none of us made it. The studio audience is significantly smaller than it appears on tv.

Drew Carey told jokes between filming. The set is tiny. The wheel is tiny. No secrets to reveal except that they must use some serious lenses and angles to make it appear bigger. It was a long day but it was a cool experience.

The dishes the MC contestants make are normally stone cold by the time they get to the tasting table, so the judges usually taste the elements of each dish as they’re walking around the kitchen during the cooking stage. This allows them to have some idea of how the finished dish will taste as well as see their proficiency with kitchen equipment.

Basic OJT (On the Job Training) is conducted before a restaurant challenge, as well as when there are specific techniques involved (eg souffle or mise en place). That’s often why even if contestants complain that they’ve never done something in their life, they still manage to produce something at the end of the challenge.

11. Your experience may vary.

Yes the Millionaire set is small, worn-out and looks shoddy up close. It’s in an island of light in a corner of a dark warehouse. But onTV it looks great, glamorous and shiny.

My teacher was on wheel of fortune Australia and he won a life supply of wd40. It turns out with average usage a can of wd40 lasts twenty years, so a life’s supply is four cans.

Worked as an extra on several TV show sets and can confirm, sitcom sets are often super tiny and the way people enter and sit down is super calculated.

I remember I had to be a waitress on a show and they made me practice my walk several times so I wouldn’t look awkward.

A work colleague of mine was one of the couples in married at first sight.

She had a horrible experience, needed counseling afterwards and is still receiving an “appearance fee” (read hush money) even though her season aired like 5 years ago.

My wife got a tattoo on a tattoo competition show. They gave her headphones to wear while she was being tattooed, but she wasn’t allowed to actually plug them in and listen to music. Pure product placement lol

Other than that it was a really good experience! Producers worked with her for several weeks leading up to and made sure she got a tattoo subject and style that she wanted.

My cousin was one of the contestants on My Kitchen Rules. She was targeted to be the “evil” person for the season and it ruined her career for awhile after. This was nearly 10yr ago.

A lot of people I talked to said they don’t believe the producer edit it to purposely target one person and she must just be a nasty person. I couldn’t believe people were that naive. There was a fair bit of drama around it all, not sure if anything came of it.

5. You have to really sell it.

hey tell the audience to clap and cheer and they film that to edit it in during appropriate events. If we didn’t cheer or clap loud enough, they had us retake it.

They let the other girl in the Showcase Showdown (Price is Right) rebid after the audience booed her original bid (something silly low like $10,000).

When it aired, they cut her original bid and showed only her second, winning bid.

3. They know what they’re looking for, I suppose.

I went to a taping of a comedy special and they had us run through numerous laughing, cheering, and cringing scenes before it even started.

I watched the special and all the audience reactions were from the pre-show taping.

I was on Wheel of Fortune. You have to get there at 5 AM where you draw straws with other contestants to decide when you will film. They film the entire week of episodes in 1 day.

Pat Sajak is incredibly friendly and interacted with us on every break. The wheel is HEAVY.

I was in a sort of “kids racing games” show. It was cancelled shortly after I participated on it.
I can’t remember the exact details because I was like 6 or 7, but I will never forget how they made me feel.

Basically, we were a bunch of little kids racing each other to complete the most games in a certain time, if you completed the whole thing (around 20 games or so) without the time running out nor breaking certain rules for each “level”, you won a shit ton of toys or something like that.

I completed the whole thing in like 7 minutes -it was supposed to last at least 15-
The “level helpers” took me aside and told me it was an amazing run so I got qualified to appear on the TV show.

In the actual “recording”, the level helpers sabotaged me, they grabbed me to prevent me from popping the balloons of the first level, pushed balloons away from me, pushed the correct balloons towards other kids (you were supposed to pop balloons to find a key for the next level), gave me “time out” for breaking rules that I wasn’t breaking.

I specifically remember running up a ramp, after being sabotaged a LOT by the “”helpers΅”, to get to my next level, I was catching up to the other kids, and they fucking grabbed my ankle and made me fall off the ramp.

I was “disqualified”, because “i took too long to get to the other level”.

They forced me to sit on the losers box and watch all of the other kids, that I had already beaten up in the test run, finish the thing and win.

I did not appear in that episode when it showed on TV. Not even me “failing”.

It’s never as exciting as you expect, but it is interesting, nonetheless.

If you’ve ever had the chance to sit in on a television show taping, tell us a story in the comments about your experience!