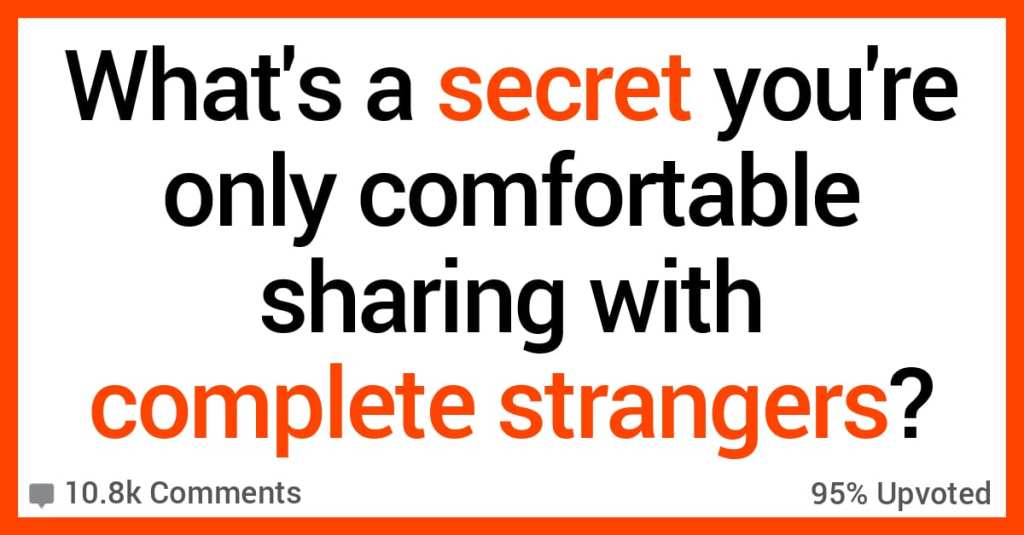 15 People Share Secrets They Can Only Tell Total Strangers

Have you ever harbored a secret so potentially damaging that you never told the people you are closest to in your life?

I’m talking about your best friends, your siblings, your parents, your extended family…

I guess it’s different for everyone, but some people have secrets that they are only comfortable telling complete strangers, for one reason or another. And we’re about to hear some of them.

Let’s see what kinds of secrets AskReddit users are keeping from their friends and family members.

“I used to purposely cover my ex gfs mouth with my hand during s*x because I found her moans to be slightly annoying and would kind of distract me to the point where it was sort of hard to finish.

Thankfully she was into the whole choking thing and thought that was hot.”

Sometimes I feel like this isn’t something I can even share with online strangers because I feel like they’d just call me an incel or make fun of me.

It’s not that I can’t get s*x, dates or anything, it’s just that I don’t want to have s*x with another person.

Fantasy wise, the thought is appealing but in practice, it just puts me off. I can’t even label myself as*xual because I do experience s*xual feelings and I have a desire to act on them but at the same time I don’t.”

“The day I planned to commit suicide, a friend called me to say how tired he was, of everything, and then hung up.

I raced to find him, completely forgetting what I set out to do. I found him and just sat with him for the longest day of my life. I did not talk or tell him what I was going to do; I just listened.

I am happy to report he is living his best life, and I am getting by just as well.”

Earlier that night I had snuck my dog some of my dinner because she looked hungry. I stayed at home with my mum and sister whilst my dad took her to the vet. (I’m not 100% sure of this because my memory isn’t very good.)

Tomorrow they came home without my dog and I said what was wrong they said she was staying the night so I waited until tomorrow really scared and sad.

Next day I got told she had to get put down or live on in a lot of pain so my parents had her put down. Ever since that day I have blamed myself for killing my dog by feeding her.”

“I struggle with my past. A LOT.

I don’t know how to process it or accept it. It’s like a permanently locked off part of my memory that hinders me and throws very bad memories at me.

It is so annoying.”

“I am from a very religious family and a conservative town, yet I am very gay.

I know that’s kind of a basic answer, but it feels so weird hiding such a big part of yourself from friends and family.”

Only my parents and an aunt (she found out by herself) know of this and I have the strong feeling the rest my family would judge me if they found out.”

“I had a friend in elementary and middle school who had a really bad home life and was severely depressed but I didn’t understand what it meant or how to deal with it back then so I did nothing and ignored it when he brought it up.

He ended up committing suicide in high school.”

I wore a lot of my sisters clothes and my s*xuality and gender identity have always been in question for me. I am a bis*xual man but sometimes I can’t get off to women or can’t get off to guys. Sometimes I just sit in my with no s*x drive at all.

With cross dressing it’s been a weird story cause I like how it makes me feel then a few days later I feel so gross in myself.”

“There are long periods of time in my childhood that I can’t remember no matter how much I try. It’s just absolutely blank.

I started getting flashbacks in 2015 – it was when I felt safe because of someone who had been in my life at the time (he’s gone now).

What I remembered terrified me. I have now actively chosen not to seek out what took place in those years.”

“Sometimes I think about going back to my ex husband just because I’m afraid no one else will ever love me and I don’t want to be alone forever.”

But in reality i’m just scared i’m going to mess it up worse than my parents.”

“I’m pretty sure my family has covered up a s*xual assault in my past.

Offhand comments and vague memories of psychologist visits are the only threads I can find to pull on but have led nowhere.

Worst part is I have no memory of anything happening but I have this feeling in my gut that I was both victim and aggressor in two separate instances.”

“I constantly fantasize about faking my disappearance and creating a whole new identity more often than I should.

I hate my life. I’ve made stupid decisions and wish I could start over. The only part I enjoy is my kid and if it weren’t for them, I would probably do it.”

“I never graduated college. I paid $200 and ordered a fake degree and had it sent to my parents house. They totally believed it. I lied to my girlfriend at the time and all my friends.

I was already on my 5th year of college with a realistic 1.5 years left. I f*cked around a TON in college with a bunch of D’s and F’s that wouldn’t count and I couldn’t handle anymore. I just never went back.

I lied to my parents and told them I was so embarrassed that I was a 5th year student, that I didn’t care to go to graduation ceremony. Also all my friends were already gone. They also believed it.

It still weighs on my conscious all the time. Whenever people talk about college and ask me, I tell them I “went” to college but rarely ever mention graduating unless they straight up ask me what year I graduated.

I lie as a last resort. Looking back I would have died to be able to graduate with all my friends and actually see my parents cheer as I walked on stage. If I could go back in time, I would study my *ss off and just finish the d*mn degree.

It’s not worth me going back to college just to complete my degree. I now run my own business and pull in a 6 figure salary. Before that I climbed the corporate ladder. The fear of being exposed and being forever defined a “college failure” motivated me to work my *ss off.

I wanted to bury that lie so deep in success that nobody dares even bothers to ask me about college. I probably would never be in the position I am in if I never lied about graduating college.”

Do you have any secrets that you’re willing to share with us?

If so, please tell us about them in the comments!