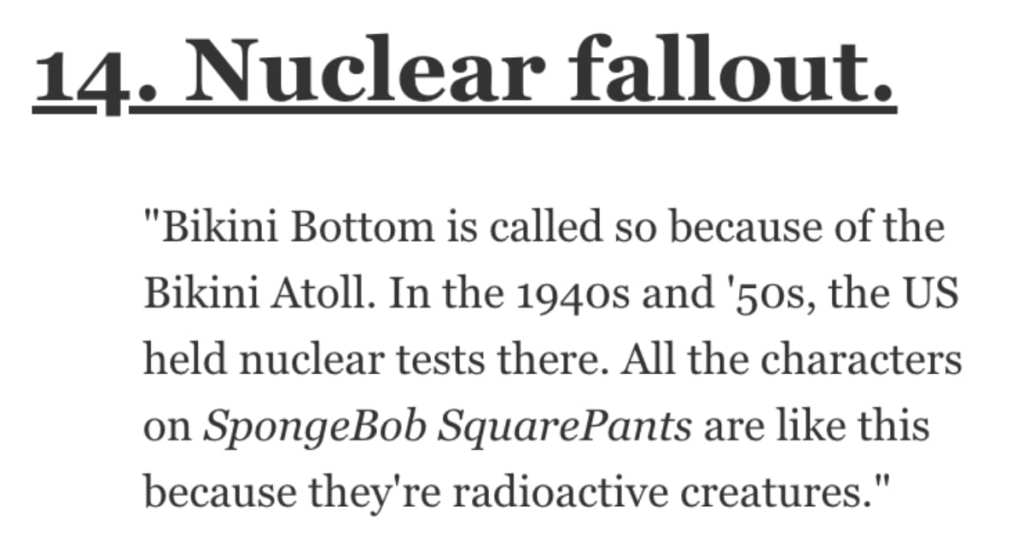 If you think cartoons are all fun and games and rainbows and sunshine, think again, friend.

There is some pretty dark and disturbing material embedded in those seemingly innocent and fun TV shows and movies that might surprise you…or even shock you.

Let’s get weird with folks from AskReddit.

“There was a Smurfs PSA that was made for UNICEF.

I believe where their entire village is carpet bombed.

“Ren and Stimpy was an absolute nightmare for the people who worked on it. John K ordered them not to make the same face twice. Pretty, but it was hell for the workers because they were constantly drawing things.

John K was a nightmare boss. One of the producers had a sign on his wall labeled “John’s knees” and invited people to kick it. By the time he left it was reduced to a hole.

They made several episodes that were just the animators ranting about how much of an *sshole that John K was.”

“The pilot of The Grim Adventures of Billy and Mandy called “Trepanation of the Skull and You” tells kids that because of a mistake in evolution our skulls are too small for our brains, and that you should drill a hole in your skull as to grant the brain more space.

Which is then followed by Billy doing exactly that.

The whole thing looks like some cursed forgotten video tape.”

“Some of the earliest versions of Little Red Riding Hood end with the wolf raping Red and then eating her.

The literal moral of the story was for girls to not trust strangers.”

“The creator of Skeletor was inspired by a corpse in a haunted house that he was 100% sure was real.

Turned out he was right.”

“The studio had to get someone else to sing “Soon You’ll Come Home” in All Dogs go to Heaven because the voice actor, Judith Barsi, had such a traumatic home life because of an abusive, alcoholic father that she couldn’t sing the song without having a breakdown.

She and her mother were murdered by him before the movie was released in a double-murder/suicide. She was only 10.

She was also the voice of Ducky from Land Before Time. Her tombstone reads, “Yep! Yep! Yep!””

“Donald Duck fought in WWII and has PTSD.

In an episode he wakes up and thinks he is in a Japanese mine field and he is in a lot of WWII cartoons.”

“Sleeping Beauty is only 14 years old in the original story and Prince Charming is around 30.”

“The premise of Adventure Time is actually really dark.

Its the aftermath of a literal nuclear war that killed most of humanity and caused evil mutants like The Litch to wreak havoc on the planet.”

“There was a Tom & Jerry episode where Tom dies and goes to heaven.

While waiting in the line of counter they show a wet sack with baby kittens inside it coming out and running towards train. Ticket counter guy notices it and says ” what some people won’t do”.

He’s talking about old times when people use to tie up small kittens in the sack and let them drown in river.”

“In the Peppa Pig universe, characters eating each other is slightly acknowledged when a couple of the characters are stranded on an island.”

“The Carmen Sandiego reboot is animated by Top Draw Animation.

They’re a sweatshop and they fired an animator for asking for minimum wage compensation.”

“Bikini Bottom is called so because of the Bikini Atoll.

All the characters on SpongeBob SquarePants are like this because they’re radioactive creatures.”

“The reason Mickey and other characters where white gloves is because it allows their hands to be seen better.

This is a reference to actors when they did black face they wore white gloves so the audience could see their hands and fingers moving.”

Do you know any weird or dark facts about cartoons?