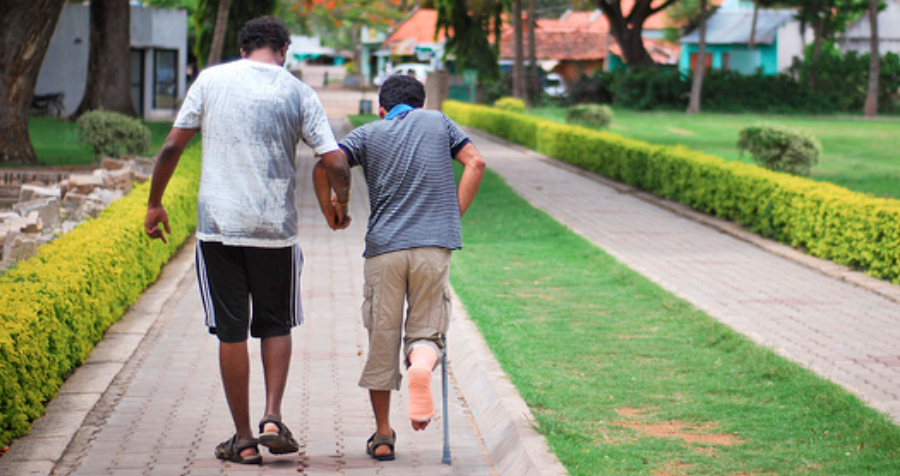 It doesn’t cost anything to be kind to people. That’s a lesson we should all live by every day, even when it comes to strangers.

AskReddit users shared the nicest thing that a stranger has ever done for them, and these stories are exactly what you need today.

“When I was about eight years old, I crossed the street without looking.

As soon as I started to cross, a stranger pulled me back by my shirt.

Of course, a car flew by the same moment.

“My son was two or three and we went to the mall. There was a model train set in a case that you could put a dollar in and watch them go around.

I was pretty broke and never had cash on me, but he was content just looking at the display.

A group of loud teens went past us. One of them came back, put a dollar in the machine and said, ‘I always liked watching trains, too!’

Then hurried off back to his friends. My son lit up.

I never would have expected that action from a stranger, let alone a teen with his friends in a mall.”

“I was at a bar with my then-girlfriend and seated next to us was an older gentleman who was alone.

He tapped my girlfriend on the shoulder and said, ‘I like the way you two talk to each other. I spent a fortune on these tickets for my wife. Unfortunately, she can’t go anymore, and I don’t want to go without her. So I’d like you two to have them. The only catch is that the concert starts in twenty minutes.’

He didn’t elaborate, nor would he accept payment. He asked only that we enjoy ourselves, and keep being good to each other.

And that’s how I got front row seats to see Prince in concert.”

“I was out clubbing and dropped my house keys.

The next day, I got a letter in my mailbox with a guy’s phone number. I texted him and it turned out he found my keys at the club, recognized the building they belong to (student housing), came to the building and tried the keys on EVERY SINGLE MAILBOX until he found the right one, then he gave them back to me.

Nicest guy ever, glad he didn’t rob me instead.”

“I was feeling really down because of school (and just life in general).

I stopped at a convenience store on the way home to pick up a bit of chocolate to make myself feel better.

The guy at the register must have noticed how miserable I looked because he gave me the chocolate bar for free.

It was a really simple act of kindness, but it almost made me tear up and instantly improved a sh**ty day.”

“One year, my birthday really sucked. I decided to go buy myself a cake at the grocery store to cheer myself up. When the guy at the counter asked who it was for (in retrospect, he meant what name to put on it), I said it was for me. He was incredulous at the idea that I had to buy my own birthday cake. I just kind of shrugged. He said I could pay for my cake when I came back to pick it up.

When I came back, a different person was at the register and she said my cake had already been paid for. It was also decorated more than I requested. I have not seen that guy working there since, so in my head I’ve called him ‘The Cake Fairy.'”

“I was riding the bus and talking on the phone, freaking out about how I was going to feed my fiancé and I, as I was the only person working (a 100% commission job).

A stranger heard me on the verge of tears and politely alerted me I had ‘dropped’ some money.

It was $40 I knew I hadn’t dropped, but my fiancé and I used every penny.

I never got to thank them, but I quit that job a week or so later and found something more stable.”

8. Still see her around

“When I was 11, I was stupid enough to cross in front of a bus with only a cursory glance backwards. I missed the minivan that had just started to overtake the bus and got hit by the left-hand corner. I was flung across the road, injuring my legs (my knee STILL hurts sometimes) and splitting my lower lip.

As I laid there, a lady who I had seen on the bus a few times came over and helped me over to the curb, checked me over, made sure my parents were called, made sure an ambulance was called, and just generally looked after a scared, hurt little boy. She was wonderful and I still see her around town to this day. She always gives me a big smile.”

“I spent some extra time helping a customer who my co-workers seemed annoyed with because she asked a lot of questions.

The customer left and, about 30 minutes later, she flagged me down in the parking lot as I was going on my break.

I went over to her car, she thanked me, and handed me a beautiful bouquet of flowers she’d just gone and bought for me.

“I helped a guy go through TSA in NYC. He’d never flown before and had no idea what he could take on the plane. Security told him he couldn’t use the plastic bags he had his stuff in. He explained his situation and I told him that, if he held tight, I’d go through security and buy him a carry-on so he could get his stuff through. He handed me a $100 and I gave him my crochet project bag to hold as insurance. I got him a suitcase, went back and gave it to him with his change, and showed him how to go through TSA. He thanked me and we went our own ways.

My flight was then delayed three hours at the last minute and I was already exhausted, so I fell asleep against a wall. When I woke up, there was a fuzzy travel blanket, convertible neck pillow, eye mask, a bag of cookies, and a little plush dog with a note tucked in his collar. That guy had stuck these gifts between me and the wall, and never woke me up. I ended up traveling for 11 more hours and that thoughtful little act saved my sanity.”

“I was struggling to carry all my books after I got off the bus because they didn’t fit in my bag (I already had four other textbooks in there), and I couldn’t get on my bike.

A lady had seen me struggling, ran out of her house, and gave me an extra bag.

I almost cried because that was the nicest thing.”

“In Paris, the Metro is not wheelchair-friendly.

We got stuck once because the accessible station was closed and we were diverted elsewhere.

Two guys walked up, picked up my Mother-in-Law in her wheelchair, carried her up a flight of stairs, through the turnstile, and down another flight of stairs to the platform.

“I got on a train alone late at night. There were only two other people: One young man and a much older, grumpy-looking man. After the second stop, the young man became aggressive toward me after I rejected him, and was trying to physically pull me off the train. The old man helped to get him away from me and off of the train. After I’d thanked him and he calmed me down (I was very upset), he sat down in the row behind me and just looked out of the window.

When I got off at the end, he did too. He waited on the same platform as me a little further down, so I assumed he was waiting for the same connection. He wasn’t. The train came and I got on. I saw him wave to me and walk to the stairs to get back to the platforms going the other way. That man had missed his stop and waited on the wrong platform, all while saying nothing, just to make sure I was okay.”

“I was carrying my sobbing infant in the grocery store while waiting in line to check out.

I was overwhelmed (it was my first trip out after my son was born), and a kind older man said, ‘One day, you’re going to look back on this with happy memories, and even miss these moments.’

He then insisted that I cut in front of him in line and bought all of my groceries.

That had a huge impact on me.

What a wonderful man.”

“After many long delays, my flight was cancelled while I was standing in line at the gate to board it. The next day was my son’s first birthday, so I needed to be home. I went to the front desk and they refused to help me in any way. Not only could I not get another flight that day, but nothing the NEXT day either, and I didn’t have money to buy something else.

A guy in line stepped out after hearing me, told them he was some high-status member, and asked to speak directly to the manager. Next thing I knew, he was transferring his OWN ticket on a direct flight to me so that I could get home to see my boy. I tried to thank him in every way I knew how, but he refused to take anything from me. He just told me he would have wanted someone to do the same for him.

I hugged the guy (probably against his will) and was in a first-class seat home. Seriously, that dude was an angel and I’ll never forget it.”

Okay, those seriously warmed my heart.

How about you? Any of these make you smile?