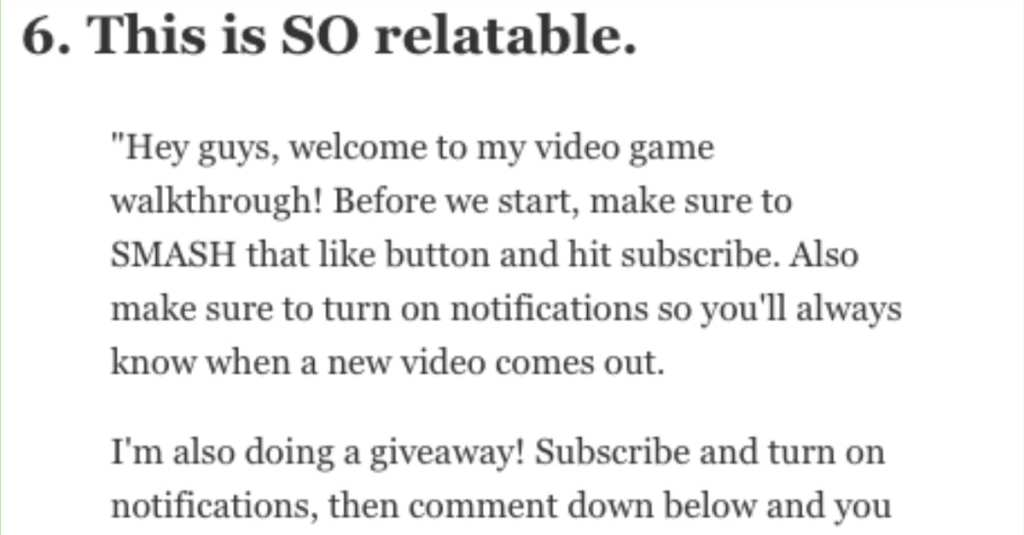 We live in a strange new world, my friends – one where all manner of folks have figured out how to make a living (in some cases, a very good one) just doing stuff on the internet.

They don’t have much in common, except for the fact that they all do these 15 things that some people, at least, find super annoying.

When people lie with their titles/thumbnails. I love watching restoration videos (people restoring old tools, machines, etc. to their former original condition) and I’ve noticed some people lying that they’ve done an amazing restoration in the thumbnail but actually do a crap job and ending up with a completely different item than it originally was. Basically don’t lie to your audience.

13. That last one really burns my biscuits.

When their “introduction” is so long that I give up before actually getting to what the video’s supposed to be about.

Apology videos in which the youtuber sits in front of their sofa, in grey sweats, with a messy bun if long hair, glasses, and turning off the camera once the whole thing ends.

10. Seriously, no video needs to be longer than 10 minutes.

Taking too long to get to the f%cking point just to extend the video length.

“and smash that red button… f%cking hammer it, break it..”

8. Laugh tracks should be banned.

Clickbait, unnecessary zooms, laugh tracks and music that is used too much.

I don’t have the time for that.

I literally have to put most videos on 1.5 speed because they’re too long and i’m interested in what they’re about

6. This is SO relatable.

“Hey guys, welcome to my video game walkthrough! Before we start, make sure to SMASH that like button and hit subscribe. Also make sure to turn on notifications so you’ll always know when a new video comes out.

I’m also doing a giveaway! Subscribe and turn on notifications, then comment down below and you might get a free PS4! Anyway, on to my video game walkthrough!”

“Thanks so much for watching! Make sure to SMASH that like button and hit subscribe. Also make sure to turn on notifications so you’ll always know when a new video comes out. See you next time!”

I hate this so much. Especially if it’s something emotionally stressful for their children, like “OMG LITTLE SALLY HAD A ROUGH DAY” with a thumbnail of a bawling child.

4. Because the icons aren’t big enough on their own?

Giant eye-catching arrows that point to nothing in video icons. It must work but really?

3. Just when you thought it couldn’t get more gross.

I used to follow a family vlogger channel because they were generally inoffensive and calming, nice background chatter when I’m alone.

Then one day the three year old broke her arm and the dad said offhand “I wish I’d been filming”. He followed up by saying he meant he wished he could have shown what happened because it was a bad break for a minor fall, but the idea that if he had have had footage of his three year old breaking her arm, he would have included it for all their subscribers to see was revolting.

2. Bothersome no matter the medium.

I have a gripe that probably makes me look like an asshole.

I watch a dude who does cooking stuff who brings his kids on somewhat often. I like the dude when it’s just him, but I always feel like his kids ruin everything. It’s fantastic that they’re doing this together and having fun, but I’d really rather just watch him. All his kids do is make a poorer version of what he originally intended, and they very obviously ham it up for the camera and just sort of get in the way.

I don’t really find it cute, even though the comments always say otherwise. I dunno, makes me feel like a jerk.

I have to agree with most of these, how about you?

If there’s something you would add to the list, tell us what it is in the comments!