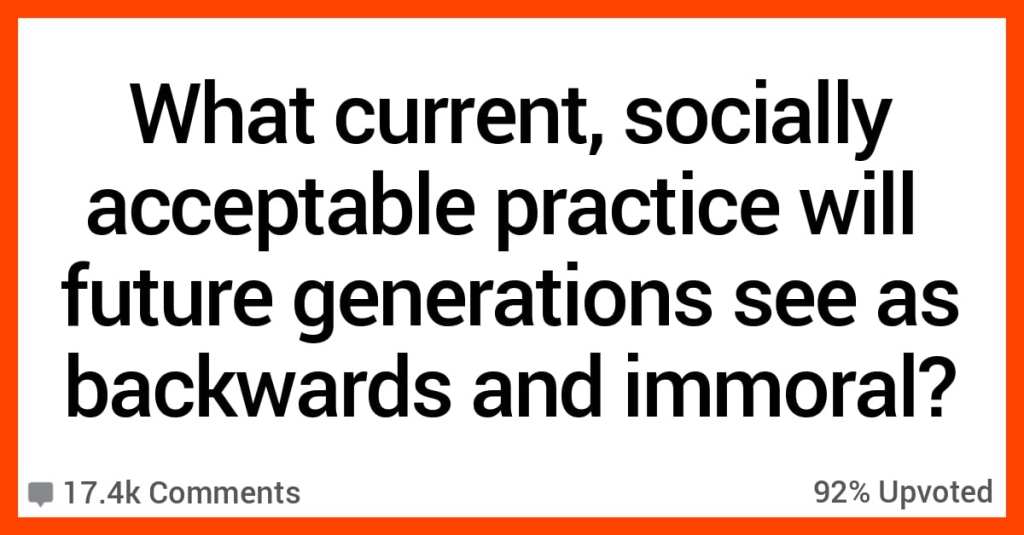 History is full of these stories. Just think back to the last 75 years or so of American history.

Black people and white people used to use separate bathrooms/dining rooms/drinking fountains, etc. in different parts of the country.

Even though we like to think we’re so advanced and enlightened, the fact is that in 50 years, future generations will look at how we behave now and they’ll think we did some seriously backward things.

Here are what AskReddit users think those things will be.

“Using something as strong and durable as plastic to make packaging destined to be thrown away.”

“Letting businesses pay politicians who are then responsible for setting laws that apply to the businesses.”

“Colleges sucking every f**king dollar out of you that they can.

“The insane workaholic culture we have that promotes unhealthy amounts of overtime and getting to work early every day.

“Allowing children to eat so much sugar.

The entire sugar industry is so corrupt.

Eat fat instead! It’s much better for you!”

“Social media in general it’s proven that it takes a toll on our mental health but we still use it all the time anyway.”

“The North American obsession/fetishization with work. European countries already have it figured out that productivity isn’t linear with time worked and 50-80 hour weeks aren’t doing anyone any good.

We’re still stuck with bragging about how little we slept and how many hours we worked this week, when so many of us are probably non or low functioning for many of those hours worked anyway.”

“Microwaving fish at the work cafeteria.”

“Influencers”, or in other words, people expressing an opinion (or worse, being paid to express an opinion) with the intent to influence others.

If I am looking to buy a new product that I am not familiar with, I will look for honest reviews. Unfortunately, honest reviews are virtually impossible to find today – they are either written by the manufacturer themself, or by a paid “customer” (influencer).

The only honest reviews are the negative ones by pissed off customers, but those are also not reliable, since they could be coming from someone who has been paid by a competitor, or just someone who happened to get that one faulty product that slipped through the QA checks.”

“The idea that it is correct and sustainable for the current generation to borrow from future generations to consume now.

This is a relatively new trend. Perhaps 100 years in the most developed countries. Only beginning in many developing countries. This is why we don’t see the horrible consequences… yet.

Traditional models of economic development were all about savings and deferred consumption. Future generations had more than past generations and it was assumed that this is how they take care of their parents – by having slightly more than they would on their own. There was a general consensus that life is hard and that giving our children a better one is our duty. I eat half as much so that you and your children can eat it all. People were happy that they had it better than their parents and attempted to control their greed for the sake of their children.

Present models of economic development are all about present short term consumption which is financed with money creation. But money creation means that the wealth still has to come from somewhere and it does – from the future. More money creation now stimulates the economy for greater investment in the future which will increase production so that the extra debt can be paid. Unfortunately because there is no way to know how much you can borrow from the future it leads to essentially what is greed because expectations for the future have no restraint in something that we see around us – it is all in the future. Then as a result the future generations have less available to them than past generations and are being increasingly more burdened by economic cost of that which was consumed.

The result is that I want my house and my car and my vacations and my pension at 60 and you can get a student loan and get a job and not live in my house because I didn’t do it when I was your age. Except you did it because you borrowed from the future – that is my future.

Almost nothing of the way we now pay for things in the long term is ethical. The most obvious example is the environment – we are consuming now by leaving environmental debt for our children – but the same is true of welfare as pensions and medical care. We have fewer and fewer children and we both live longer and have greater demands and expectations. This means that our children have to both work harder to have the same standard of living that we had and in the end they are loaded with debt to pay for our welfare.

In the past a child would get inheritance from the parents. Sometimes nothing. But now every child gets a ton of debt and inflation before you get to whatever your parents left you. The national debt, the private debts, consumer debts they all keep growing… Who is going to pay it? Every time the government bails someone out to stave off a complete collapse of the debt-based economy the bill falls on the shoulders of the new generation. How much longer?

We still keep deferring the deadline with more and more money creation and various financial inventions but sooner or later enough people in the world will get on the same “consume now, pay later” scheme that it will crack because there will be nowhere to borrow from or nobody left to exploit and the sheer pressure of everyone wanting to have it will be like a collapsing star.

And there will be no escaping the black hole. Nobody will remember what it meant to just work for a better future for your children. Everyone will be angry that they can’t have it as good as their parents. And remember… the “natural” way of human society is not to have it as good as your parents but better. It is so natural to us as if it has been wired into us by evolution – which makes sense because those whose parents ensured their children’s well-being would be more likely to survive.

And when you can’t have it better. When there is no hope for a better future. Why live? Why let others live…? Why should they have when I can’t? And this is how wars begin.”

“I really hope this extremely polarizing political climate is seen as backwards and immoral in the future.”

“I think one day some future generation will think “Can you believe they used to just let people drive these multi ton metal boxes at high speeds? They just accepted car accidents and traffic as a fact of life.”

I think this even now when I’m doing 80-85 mph on the highway and I look over and the driver next to me is doing the same speed while looking at their phone.”

“Posting pictures of your children on social media.”

“Gotcha” debates where the aim is just to win the argument rather than actually being right or making sensible points.”

“My money is on the current methods of cosmetic surgery.

Jamming sacks of fluid in a lady’s chest to create bigger boobs, for instance, seems like something for which there will one day be a better practice.”

Alright folks, now it’s time to hear from you!

What do you think people will fine immoral in the future that we just do like it’s normal today?

Sounds off in the comments!