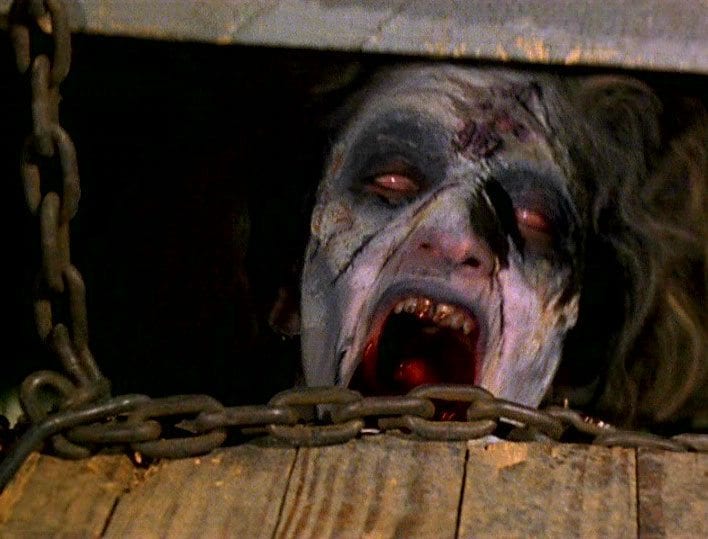 When I was about 7 or 8-years-old, I stayed home sick from school and was all alone in the house. My older brother had rented a movie the night before, so I decided to spend my sick day watching The Evil Dead…

It totally traumatized me but also gave me a love for horror movies that continues to this day.

People shared what scary flicks traumatized them and left a lasting impression. These responses come to us from the Buzzfeed Community.

Let’s see yours in the comments!

“It’s this movie from the late ’70s that no one’s ever heard of for some reason. It’s basically about a family rents a large estate one summer and a whole lot of weirdness goes down. It will mess you up for life.”

“This remake was so terrifying that I couldn’t finish watching it the first time. It took me a whole year to gather up the courage to try watching it again.”

“It’s been way too long since I’ve seen this, but it still terrifies the crap out of me!”

“My grandmother had 80 acres in the middle of nowhere in Wisconsin. I saw this movie when I was 5 or 6 years old and was terrified to sleep in that house at night because it seemed like the perfect setting for those zombies. It still creeps me out.”

“I thought it sounded like a funny premise, but it kept me up the whole night and bothered me for weeks. I’ve watched a lot of horror movies. I don’t know what it is about this one, but it absolutely haunted me.”

“I was nine and Chucky somehow reminded me of my American girl doll. I had to put her away in my closet every night so that she wouldn’t stare at me with her huge eyes and buck teeth trying to plot my death while I slept.”

“I watched this when I was a kid and I haven’t had a worry-free shower in 16 years.”

“This is the most disturbing, gory, hopeless movie ever made. I legitimately wish I could erase it from my brain.”

“I saw it when I was about eight and — although I had already seen other horror movies because my parents were huge horror fans — this movie was the only one to give me nightmares. To this very day I get apprehensive around undertakers, especially if they are tall and wearing a dark suit.”

“I went and saw a late night showing of this with a friend, knowing absolutely nothing about the film. Then, when the trailers for new movies started playing and they were all scary movie trailers, I knew that we were in for a ride. We were terrified!”

“I watched this one night randomly at 3 AM because I couldn’t sleep and I love witch movies. It scared the heck out of me! It reminded me of the movie The Village, but scarier. It seemed so real. I will never watch it again!”

“I can deal with a ton of violence and gore, but Lord, the sadism in that movie was off the charts.”

“If you haven’t seen it, be thankful. I saw this when I was 10 and it is no less disturbing to me in my 40’s. Most horror movies nowadays don’t bother me, but maybe it’s because this one desensitized me.”

“You can’t make a list about movies that mess you up without mentioning this one. My friend and I watched the original German version. I thought I was going to throw up and made my friends turn it off.”

“This should definitely be on this list. I watched it back when it first came out and — to this day — I won’t answer the door if I’m home alone (unless I’ve ordered food, of course).”