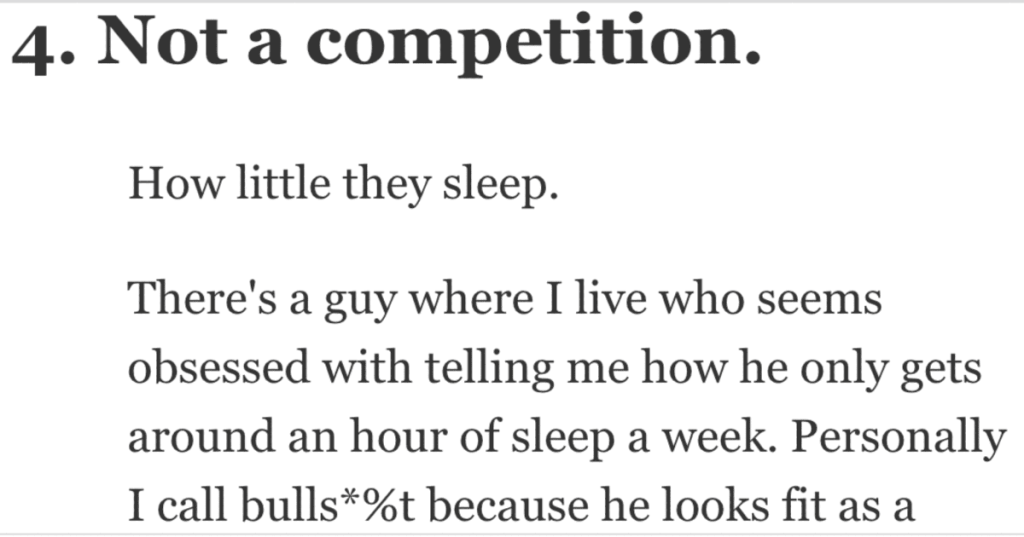 15 Things People Brag About Even Though They Definitely Shouldn’t

If there’s one thing I’ve learned for sure in this life, it’s that people are an absolute trip. Once you realize and accept this, behaviors that make you want to yell or cringe become just one more thing you ultimately expected.

That said, there are some things people brag about that the rest of us definitely think they should have kept to themselves – and here are 15 of them.

Going to work no matter how ill they are.

I worked for a company that was incredibly strict during the peak of the recent pandemic and one of my coworkers (my favourite one apart from this!) would get frustrated when others would call in sick, pointing out the times she didn’t feel well and still came in.

She would say things like “They better be on their deathbed to be missing this shift” when the company was begging us to not come in if we even had a runny nose.

We were both in management but I was slightly her superior so I shut her down multiple times.

14. You really shouldn’t have to take that much.

How much xanax they took and posting it all over social media.

So many people in my high school took xanax like it was candy and thought they were the s*%t. Like congrats, you’re now a vegetable for a while.

Going back to work right away after having a baby.

I had a boss that used to brag about not taking a day off even when each of his kids were born. I’ve met others that brag similarly.

So, you are more dedicated to your job than your family? Seems odd to me, but whatever. Do you.

It’s the worst when they don’t realize they’re talking about treating people like s*%t. “Yeah and then I just left them there it was hilarious! They had no idea where I went LMAO” and you’re listening to the story like, “wtf is wrong with this person?”

No it’s who you made yourself to be so you could feel tough. Stop intentionally ruining other peoples days/happy moments/lives/anything because you’re bored or whatever.

Life’s s*%t for everyone there’s zero reason to add to it.

Not taking PTO on their jobs. Its kinda sad in my opinion.

When I first started working in a hospital I took pride in never missing work and was annoyed by those who constantly were missing.

By the time I left, I used every last second of PTO I had and encouraged all of my coworkers to do the same.

Their IQ, especially when they got it from an online IQ test.

How accurate are IQ scores from online tests anyway? I got mine from a non-online source and it confirms my IQ is positive.

My covid test in the other hand is 47. Not sure what that means…

cheating on their significant other

His own biggest weakness as described by himself is that he only has a capability to care about himself and not others and doesn’t know why(he obviously has ASPD but I haven’t told him like why do you need to know that if I can’t help, there are many other signs)

how much they hate their spouse yet stay together?

“The ole ball and chain uhuuhuhuhuhuhuhu”, “My partner won’t let me do x,y,z” “we argue all the time, that’s how it is when you’re married”

Coworkers at my old job talked about loving working opposite shifts to their husbands because they couldn’t stand being around them. How bloody depressing living that way.

My partner and I coordinate work as best we can to spend time with each other and our kids. Marriage culture is f**king weird.

How good they are at driving drunk

How little they sleep.

There’s a guy where I live who seems obsessed with telling me how he only gets around an hour of sleep a week. Personally I call bulls*%t because he looks fit as a fiddle.

If I get one hour less sleep than I should I look like a freaking zombie. Who knows though.

3. The earlier the more sad.

How early they lost their virginity.

2. Take care of yourself.

How trashed they get, every day/weekend.

As a kid I always saw my uncles get wasted daily. Fast forward to 2022 and most of them passed away before the age of 50.

1. It’s called self control, and it’s a good thing.

How little it takes for them to resort to violence.

Yeah, if you do these things you should definitely probably stop.

What else would you put on this list? Let us know in the comments!