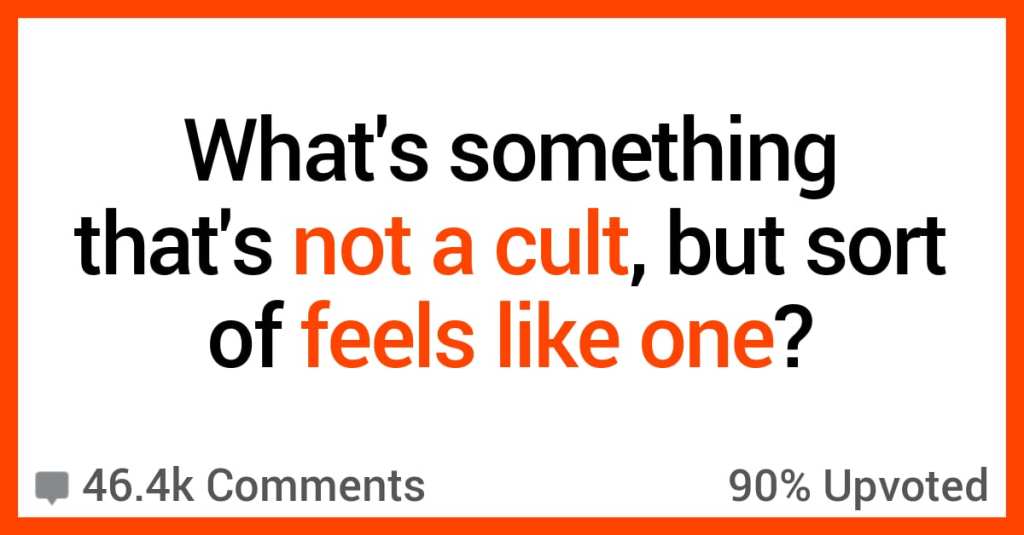 15 Things That Remind People of a Cult

Did you ever go to a meeting, or sign up for something, and after you get home, you wonder if you’ve just voluntarily joined a cult?

Gym memberships definitely come to mind, but who among us hasn’t been at least partially sucked in by a pyramid scheme in our day?

If you’re wondering if you might be part of a pseudo-cult, here are 15 non-cult things that give people the same, creepy vibes.

15. Not all families are deserving of blind loyalty.

If you’re inside the family, you are accepted no matter what and you don’t question anything.

If you’re outside the family, you are treated politely but don’t really matter much unless you act as part of the family.

If you were part of the family, but “betray” them, you are excommunicated and they spread lies about you.

Right after I finished someone said “that sounds like a cult”.

I didn’t end up going there. My grades were not that good and the university I ended up going to had a better physics program for me

If you’ve ever known anyone who has worked at Disneyland, they will talk your ear off about how it’s the happiest place on earth and how lucky they are to work there (well, pre-pandemic)

12. And it doesn’t work out that well for most.

Hell, just interviewing with Amazon feels like an initiation with all the leadership principles and what not.

Marching band. If you know, you know.

I was in marching band in high school and just graduated earlier this year. I wanted to do drum corps since 7th grade but decided not to in my last year of marching band. People are paying to learn, thats what it’s about. But I barely have enough money for that after I got a job and would much rather spend those years of my life earning money and planning for my future.

And the hours that they make you rehearse. In high school we would have band camp for 2 weeks and it was 11 hours a day 6 days a week. I think drum corps does more and its for months at a time. I still have friends who wanna do that.

The Order of The Arrow in the Boy Scouts. Technically an approved organization, but its cultish as hell.

It’s funny, because they make you do this big induction campout, and the day after I got back from mine, my english teacher gave a lecture on how to identify a cult, and it hit a lot of red flags.

Can’t believe I had to scroll this far to find any mention of BSA. Regular scouts can be culty depending on the troop/council, especially when you get into summer camp cliques, but OA is above and beyond culty on purpose.

People who own Thermomix machines.

Spend that much on an over-elaborate food processor and I guess you need to double-down but man, they just won’t shut the fuck up about how it changed their life, oh cooking is sooo different for me now, oh it’s just sooo convenient.

Having said that, I did once go to a ‘Thermomix Party’, where they try to mind-wash you into their not-a-cult, because the lady that invited me was recently divorced and pretty hot and I figured why not give it a shot – I never particularly liked her ex-husband, so could have been a multi-bird stone throw.

I barely made it out alive without my wallet being lightened a couple of grand – man, the sales pressure was intense.

The latin, the constant themes of death and impermanence, or the low chanting?

6. At least they work for good.

Every time I try to make friends based on my interest in certain things (Lord of the Rings, specific bands, Harry Potter, etc) I feel so pushed out because I’m not into it enough. I enjoy a lot of things and would love to share them with people.

But I don’t care that it’s a specific musicians birthday or what his dogs name is, and I listen to more than one artist and like more than one movie/book.

5. But theater kids are the best!

High school clubs where you spend a lot of time together. Marching band and theater are the ones that come to mind for me.

This is extremely true of theater, even into the professional ranks. Too many gurus, too little pay, too many abuses.

My Little Pony, too.

I watched that show for a couple seasons back in the day, after wondering why several of my friends were hyping it up (including one that really surprised me by liking the show). Friendship is Magic. Pretty good show, quite funny.

Took a peek or two or three into the fandom, though, and… Jesus Christ. It was very “Well, no wonder people who watch the show have a bad reputation, goddamn.”

Used to teach composition at a div I university and for the “persuasion” paper one student wrote this brilliant takedown of everything that was wrong with her sorority. It was her best work of the semester and she got an A.

And I asked her when she was going to share it with her sisters and she turned 12 shades of red and said, “Never. I couldn’t.”

I recently had a conversation with one of my friends who’s obsessed with being a “girl boss” so she joins all these pyramid schemes all the time.

Her: I just joined blahblah (I already forgot the name)

Me: What is that?

Her: It’s a company that does multi level marketing. It’s so great, you should see how much money the people at the top have, they basically became millionaires in a couple of years

Me: You joined another pyramid scheme?

Her: Ugh, omg it is NOT a pyramid scheme, it’s an MLM. People get those two confused all the time, MLMs are serious this is a real business and it makes lots of money. They taught us all about the difference between MLMs and pyramid schemes during orientation. I hate that people don’t get the difference.

The ones that air on TV with a crowd that rivals sports teams, owns sports arenas and has its pastors fly in private jets.

There, I said it.

I have to agree, even though I never really considered some of these before now.

What would you add to the list? Tell us down in the comments!