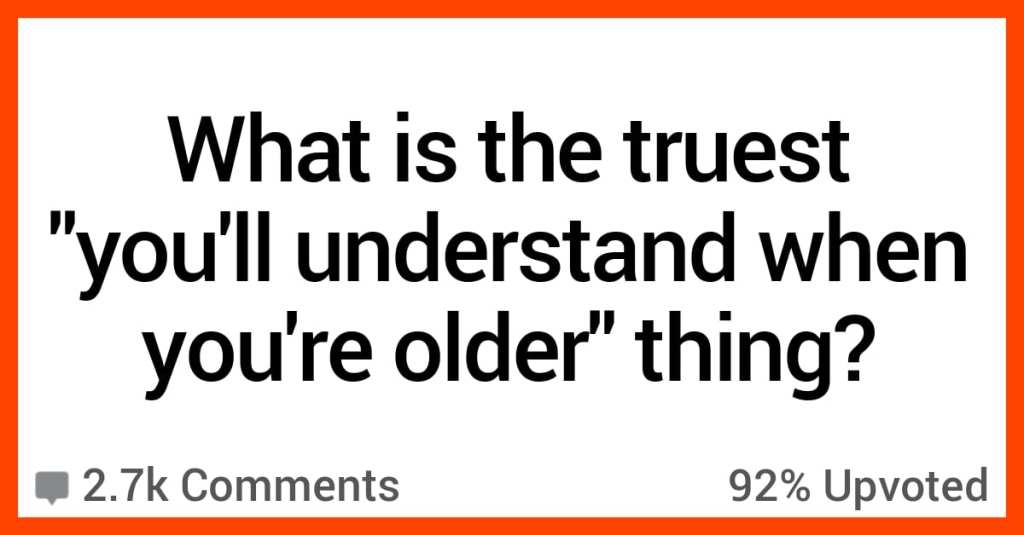 No one likes to hear that the only reason you supposedly can’t understand a feeling or a piece of advice is because you’re too young.

That said, experience is the best teacher, and there really are some things everyone has to learn in their own time – like these 15, all totally true.

Teenagers are just kids. It’s something I quite literally was not capable of understanding until I wasn’t a teenager anymore. When I was a teenager I felt soooo grown up.

And how sometimes, some adults are just kids in adult bodies.

Or how adults are simply just flawed human beings too.

Used to look up to adults for what’s right and wrong but as we grew older, we kind of realized that adults such as our parents are simply just flawed human beings and they may not know it all too either.

Not everybody is going to like you, even if you’re a good person.

13. I legit love getting socks.

Socks are a very nice gift.

Yeah, when you first move out and have your own place and all the bills with it, you start to question all those little purchases you’d have just whipped your wallet out for previously. Ehh, I can get away with the socks I already have, I’ll just match up odd pairs when they start getting holes in them. I don’t need that new coat, I already own one.

You can’t afford to treat yourself to everything any more and clothes are quite low on the list of priorities.

Why my parents would look disgusted eating/ drinking anything that was sweet.

I never understood why they watered down juice until now.

In my teens and 20’s, I just couldn’t understand how my parents were so oblivious to celebrities. They were all over TV, their names and faces blasted on everything, it seemed everybody had some strong emotionally charged opinion about every major actor, musician, director, or tabloid magnet. What are they, living under a rock?

Didn’t take long to find out why. Growing up, I didn’t have a pre-existing list of “these are famous people,” I learned them as they came onto the scene. Eventually, though, they all dropped off the list one by one. The list kept updating. It’s a lot harder knowing who is a household name when you also have to know who is last week’s news.

I was only 30 when I realized…I have no idea who famous people are anymore. I just couldn’t keep up at all. I’ve become like my parents. Don’t know. And honestly, don’t care. Celebrity worship, even as cursory as simply knowing their names, is a vapid, fruitless endeavor. Today’s idols are tomorrow’s trash.

The sound of your joints exploding every time you get up.

I thought I loved my wife when I was 20.

I realize now that when I was 20 I didn’t understand what love is.

Something a little more lighthearted, but about half the jokes on cartoons like SpongeBob take on a whole new light once you’ve got more experience under your belt.

You either die a Spongebob or live long enough to become a Squidward.

Man, nuts to that sponge. Squidward has to put up with an immature, unaware coworker, who even on his days off won’t leave him the hell alone.

He just wanted some goddamn peace and quiet.

There’s really no going back- you really just get one shot with each hour you get.

Just have to make your peace with the choice/path you took and keep it moving.

6. They would do anything for you.

What parents sacrifice just so you can do something fun.

Last night my husband and I sat in a line of cars for an hour and a half so our kids could see this cheesy drive thru light display in my town with Santa and other characters. 0/10 not worth it for us but the kids loved it and it was worth it to see them be able to do a fun Christmas activity during a pandemic.

It made me think of how much my parents had to endure taking my brother and I to theme parks and stuff as a kid just to see us happy. I appreciate it infinitely more now.

King Triton, Ariel’s dad was right. She was just a child and she was not “in love” with the random prince she saw for all of 30 seconds.

Honestly, this is a great example of what’s wrong with parent-child interactions, because when we were kids, we did agree with Ariel. We were persuaded by her emotions and saw her desires as our own. As adults, we have a fully developed brain (hopefully) and more life experience, and therefore we aren’t convinced by the ephemeral, but intense emotions, that kids/teenagers have. But rather than validating Ariel’s feelings, interests, and desires, Triton’s basically like “You’re wrong for feeling that way, and also I’m going to destroy your room.” Which actually happens. Parents actually do that and are then surprised when the kid turns to the only validating adult in the room, who just might be a soul-stealing witch.

I really like revisiting media as an adult, not only to see how my sympathies have changed, but also to make sure that I’m not the adult who is perpetuating the conflict by not listening. Because as an adult, I expect better from myself.

4. I wish I would have enjoyed my metabolism more.

Never thought much about when adults would say “You’re still young, just enjoy it”.

3. There is no black or white.

That EVERYTHING has shades of grey/is a sliding scale. It is so easy to understand the world as absolutes when young.

Suddenly realising in my late teens/early twenties that basically nothing is an absolute was a total revelation that really steers my understanding of everything and undoubtedly makes me a better person.

The thing that is the worst about getting older is seeing your parents and other loved ones age and eventually pass away. When you’re a kid (even a high school age kid) you assume these people will just be around forever and things will always stay the same as they were. It makes it easier to be disrespectful and generally take them for granted. I’m now 35, and this year was the first where I started noticing physical limitations with my dad especially and that was hard. They’re minor for now, but it’s only going to get worse.

The biggest blow to me is realizing I likely have less than 20 years left with my parents. Losing that constant source of love and support will be hard to take. They’ve been a rock my entire life.

My great-grandmother used to warn us that time speeds up when you’re older.

By gum, I think she’s right!

As someone who is now “older,” I have to say that I agree.