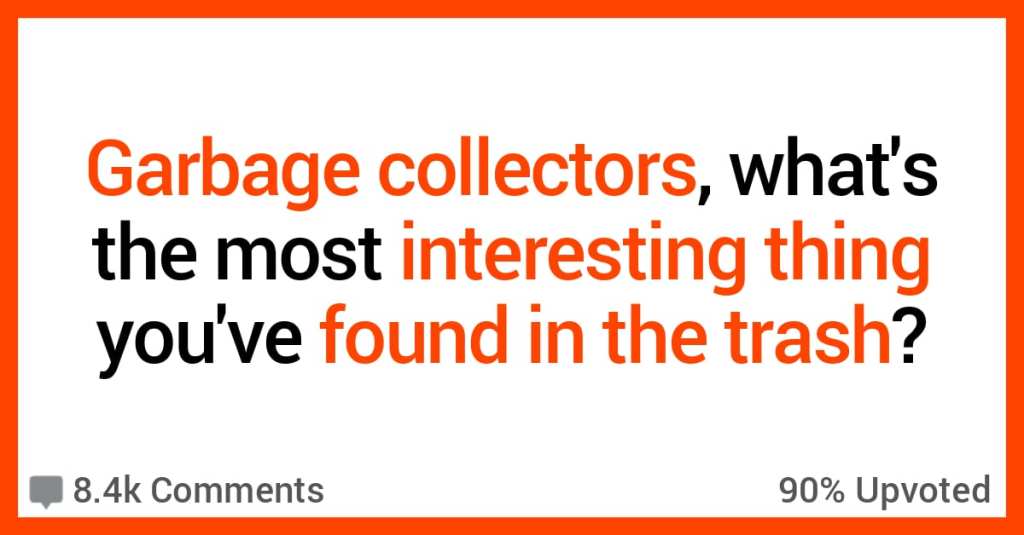 These 15 people have found all manner of things in the trash, and lucky for all of us, they’re here to give us all the dirty details.

My father was a garbage man when I was born. I don’t remember because I was like 3 months old. But my first dog was in the trash. My dad stopped. Picked up a box and heard some shuffling on the inside and there were two puppies. My dad kept one and the driver kept the other. They were brother and sister (my dad assumed). He kept the male and named him Jasper.

He was literally my best friend growing up. I had him for 13 years and my dad tells me the job was worth it just for that dog. He called the police and animal control on the residence but doesn’t know what happened after that. All I know is I’m 37 and still love that dog so much. I’m so thankful my dad saved him and his sister.

14. Must have been a popular item.

I worked in the scrap metal business and have found not one, but two of three exact same bread statue, of two bears screwing each other

Not a garbage person, but I live in a large apartment complex. I could have furnished multiple apartments with all the stuff that gets thrown out here (and partially furnished mine), but the best thing I’ve seen in the pile was one of those grandfather clocks you can make from a kit.

Still looked very nice, but it needed some fixing to get it to run again. I’m still waiting to find a piano (I would like a piano).

Found a 55 inch tv next to the dumpster 4 years ago. It was missing 1 hdmi port on the side. It looked like someone might have tripped and ripped it out.

Anyway, I opened it up googled the motherboard serial number and found a brand new replacement for like $60 less then 25min away….needless to say I called ahead on my day off picked it up and it works like a charm. Still use the tv to this day.

55in Sony 2012 lcd tv. I have chromecast with google tv hooked up to it now and it’s awesome.

My uncle was (still is?) a garbage man and found a fully boxed Power Rangers Megazord toy. I don’t remember which season or what but it had been previously opened and all of the parts and such were still inside.

I don’t remember if they sold it off or what but it was super cool to see.

A part of me feels like maybe a collector tossed their boxes away and mistakenly threw the whole figure with it or some kid’s parents ditched it while cleaning up after a birthday or Christmas. I don’t know but feels bad.

10. I can’t honestly even imagine what this looks like?

I’m not a garbage man, but I once scored a whole custom built staircase from a dumpster. It was in perfect condition but apparently built to the wrong spec. It worked great for my barn.

9. There are some cool perks.

I worked as a showcleaner in Melbourne a few years ago and we would sometimes get leftovers from shows and fairs and other events. For example after a Coffee Fair we got hundreds of cases of all sorts of plant based milk. They were still on the pallets and the trader didn’t want to load them back up. At a beer and wine fair the same happened, but with wine and craft beer. We had quite a few parties “sponsored” from that one.

Then there was this one big concert where a huge storm hit and everyone left everything they had brought behind to hide in their cars and leave. We found camping furniture and lots of closed beverages and food. One coworker even found a bunch of bundled up cash, which amounted to a couple hundred bucks. And, since it was a concert of a band a lot of older people listened to, we found coke, handed it over to the authorities and later were told it was enough to buy a small car from the market value it represented.

But the coolest thing that happened at one of the shows was not something we found. There was a big classic car event at the show grounds and it had some of the finest and rarest cars you could imagine. At the end, we were cleaning as usual, and this guy comes up saying he saw us during the shows checking out some of the cars. At first I thought he’d berate us, because we were just the cleaners and should focus on the job. But then he invites us to ride along if we wanted to. So that was the time I got a childhood dream fulfilled and was allowed to drive in a ’69 Dodge Charger R/T.

This experience and the fact that we got to go backstage with some of the coolest bands was the big plus of an otherwise hard and dirty job.

My father was a garbage man who also did clean-outs for homes and businesses, where they’d rip apart the entire building and throw everything out in their dumpsters. He worked on a ton of really massive houses, some worth 10s of millions of dollars, one was worth 40 million and wasn’t even the permanent residence.

Best things I got as a kid: A pretty much unused trampoline with a net and everything.

A go-kart that my dads friend was able to fix up and we used all the time (I live on a dead end).

And once he cleaned out a deli that was closing down, and we no joke had unlimited Snapples and Sodas of every flavor for almost a year. I’d drink the Snapples while out on the trampoline. I used the hell out of all 3 of those things in my childhood

Finally something I can contribute too! I do trash at apartments. In the year I’ve worked the job, I’ve found and kept:

-various decorations I’ve given to my mom

-an original xbox with at least 80 games all in a box, $20 (to my friend that collects old video games)

But yeah, it’s crazy what people throw away.

I was a garbage man for a few years, and on these trucks it had a grapple arm that come out off the side of the truck and grabs the bin, lifts and dumps it.

There are three cameras on the truck, two to see the bin and hep you line up and grab ahold of it and then switches to another camera view as you dump the bin out and you can see the trash fall out.

Well one day I’m doing my run, grab a trash bin, pick it up, dump it and out falls a bunch of mannequin parts! I nearly sh%t myself thinking a serial killer dismembered somebody and put them in the trash

5. The stories they have.

Oh man, my time to shine! I’ve been working at a waste transfer station (“garbage dump”) for many years.

A freezer stuffed with a skinned, rotting, headless deer carcass. We nearly called the cops before we realized it wasn’t human. Used needles. The worst being a tie between “porcupine couch” and the lady who literally handed me a paper bag full of syringes she found during a park cleanup. large container of old crystallized picric acid. Bomb squad had to deal with that one.

A 1st gen platelet counting machine, complete with weird tubes of bright green liquid and mercury. When I was prepping it for hazmat disposal I had to call the company that bought the company that made it for some info… they never digitized the records but the oldest repair tech still working was super excited because he remembered servicing them 50 years ago.
coffin. No body, just the coffin. Couldn’t see anything wrong with it either.

Buckets of testicles (from a ranch) that had been sitting out in the summer heat for a week. Smelled so bad my coworker hurled. That’s not the weird part… the weird part is the guys wanted their buckets back. Do you know how bad it has to smell to make a garbage collector puke? And they wanted them back?!

The $10k duffel bag. Lady came in super upset because earlier she threw out a duffel bag that she didn’t know her boyfriend kept cash in. Over $10,000 in cash. We never found the bag.
16 full size barrels of old vegetable grease some guy had saved up in his garage. He was planning to make a biodiesel car or something

We sometimes have to do house clearances at work (dead people with no family and the house is to be sold).

Lot of the time stuff isn’t worth the time it takes to sell it so we get to keep stuff that’s gonna be thrown out, I’ve gotten so much fabric, embroidery thread, all sorts of sewing/dress making materials, I will never have to buy another buttons in my lifetime, I like to think the old ladies it used to belong to would be glad to know it was gonna be used.

Grew up a small town so everyone knew everyone. Our garbage man (Lee) would regularly cull out items for us because he knew my dad would tinker on them. Lee gave me my first bike, which only needed to be painted, and so so many books.

He passed a few years ago. When I saw the notice I called up my sister and we had a bit of a nostalgic cry about what a nice man he was to us kids.

Not me but my brother. Someone apparently threw out grandpas stuff from the attic after he passed away. This was the last scheduled pickup at the house and everything was already moved out, nobody living there.

Driving an automated (claw to grab and dump) truck, my brother was irritated there were these 2 bowling bags he had to get out to throw in the truck. He realized they seemed a bit heavy, so he opened them to see why.

Inside there was real silver silverware/flatware. He ended up selling it for scrap prices to a jeweler and got $3000.

Not a garbage man, but have rescued projectors, computers, furniture and even a very expensive Yahama keyboard (just needed a new plug) from skips / being thrown out. Loads of music scores. A dining room table with nothing wrong with it.

I may be just about to get a 65″ touchscreen TV that’s no longer touchscreen, too, depends on what happens to it over the next few days.

Large companies throw all sorts away and they’re far more focused on “I just need to get rid of this” than spending the time to find someone to take it.

By the same token, I’ve also binned about 20 fully working interactive whiteboards because I couldn’t get anyone interested in taking them.

P.S. Yes, I sought permission before taking any of the above. If I just took whatever I saw, I’d have even more stuff.

I will never understand some people, but maybe that’s the way it’s supposed to be.

If you’ve found something weird or interesting or amazing in the garbage, tell us about it in the comments!