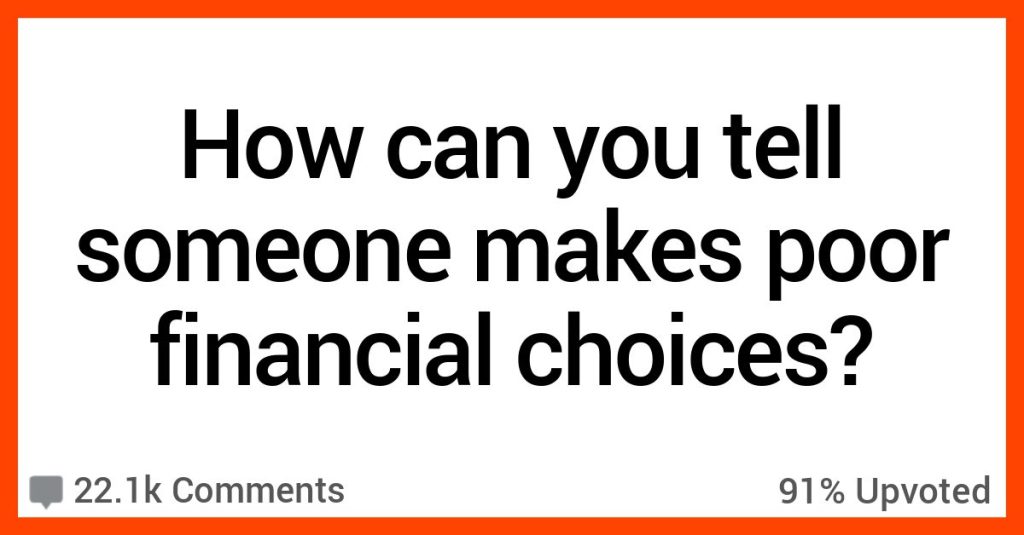 15 Ways People Can Tell You’re Not Great With Money

Figuring out how to manage money, live on a budget, and use credit responsibly are lessons that take most people a few years to learn, and it usually happens in fits and starts.

Once you’re on the other side of it, though, the financial mistakes other people make are glaringly obvious – and people say these 15 things mean you’ve still got a long way to go.

My sister and her husband had roof damage from a winter storm. Got an estimate for repair and the homeowner insurance sent them half the money. They never did the repair (therefore never sent in the completed job/invoice to get the rest of the $$$). They spent the money on bs.

The house has fallen into such disrepair it’s disgusting. Their front door hasn’t been able to open in at least 10 years.

I did an install for a women who just got a new laptop from a rent to own. She was so happy with the deal. She excitedly said she got it for $100 month for 36 months. I was like, ma’am I just bought a laptop for $400 from FutureShop.

Ahh I feel bad saying this and I, in NO way, am talking crap about anyone who lives in a mobile home.

My husbands family is a family of EIGHT. They lived in a two bedroom mobile home where they barely paid much in rent and had everyone squished 3 to a room, some sharing a twin bed. But each of the ones who could drive which was like 4 of them, always had a car that was brand new and of the year. Not used or anything. Had to be brand new no miles.

They could have easily gotten a bigger place but they never wanted to because they liked having nice cars and knew if they got a house or bigger mobile home they wouldn’t be able to afford the new cars.

Filing for bankruptcy then immediately buying a new car with rims and new bolt ons. I work with this type of person who also complains about having to work and always trying to leave.

My roommate is an attorney who deals in debtors rights. He’s told me before that even if you file for bankruptcy, creditors can still go after you for stuff that you bought right before you filed for bankruptcy.

Rolling car payments into your next car. I can’t count how many people I know who traded in perfectly functioning cars they still owed money on because they “needed something newer” or “outgrew their current car”.

I know someone who was paying $900/month for a Hyundai Tucson that was listed for like $25k. It ended up getting repo’ed.

It’s called rolling negative equity, and it’s a bad idea, indeed. I did this once.

When I was several years younger, I bought a brand-new 2014 Jetta SportWagen TDI. Nine months later, I was at the VW dealership, and the new version (this time called the Golf SportWagen) was out. I asked if they had one, and they did. And I bought it on the spot—a fully loaded TDI SEL. Since it was so new, I paid MSRP, plus the taxes got rolled in. They gave me $21,000 for my Jetta SportWagen that I owed $27,000 on, which meant that I financed in $6K of negative equity.

And that is how, even with a decent interest rate, I ended up with a $715 car payment on a fucking Volkswagen.

I made out lucky because VW bought back the Golf SportWagen during the diesel scandal (and VW Financial canceled the remainder of the loan balance), but I will never ever do that again.

9. If that kind of thing appeals to you.

We live in a very cheap, neglected apartment building but someone here owns an Audi. With a cheaper car, they could live somewhere with hot water and no rats.

Wearing designer wear but struggle purchasing anything else.

Wearing dior but sleeping on difloor

Weekly overdraft notices from the bank, along with a stack of boxes from Amazon orders

Participating in a MLM scheme.

You know, this amazing opportunity isn’t just for money! I could help you get your pre-kids body back, too! I saw the latest photos you posted and your kids are so cute. Just thought you might have been trying to hide behind them. You don’t need to! Your body can be as beautiful as your face!

I’m starting a charity to raise awareness of pyramid schemes.

Donate $100 to register as a fundraiser and you’ll receive 10% of all donations you raise.

This probably isn’t as common anymore, but 15, 20 years ago, going into Gamestop and trading in a pile of games for cash (which we all know Gamestop pays pennies for most trades), and declaring intent to spend it on cigarettes.

I saw it weekly when I worked there.

When there is an old sofa, broken fridge, and new Audi on the drive.

Getting another pet when you can’t afford the first one.

Getting another baby when you can’t afford the first one.

Getting a pet when you can’t afford the vet bills.

Tattoos when you barely made enough for rent after borrowing money.

People who eat out for every meal. I had a coworker who did this, but then complained about never having any money. She’d eat out for breakfast and lunch and go down to the Walgreens for a midday snack.

Do any of these apply to you? I hope not!

What else would you put on this list? Drop your thoughts in the comments!