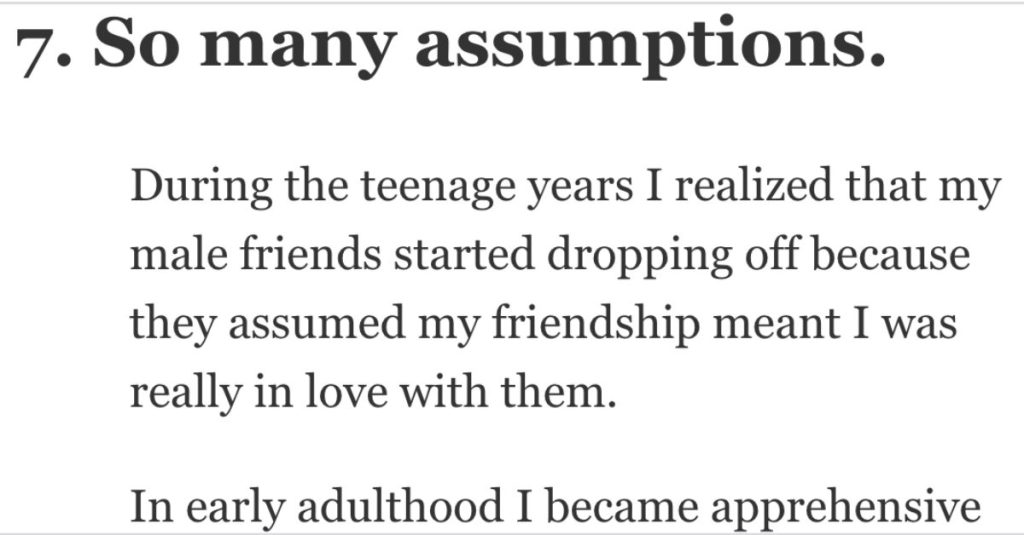 15 Women Share The Innocent Behaviors That Are Almost Always Misinterpreted

Being a woman has never been an easy gig. Not only that, but no matter how many great female role models you have in your life, there’s a learning curve – and some lessons you just have to learn the hard way.

One of those is that some men are determined to misinterpret kindness or other innocent behaviors as an opening to get certain ideas. Once we realize what those behaviors are, we tend to stop doing them – and these 15 women are giving you youngsters a head’s up.

Showing any kind of concern for a guy. Like if you have a guy friend that looks sad and you try to be a good friend and comfort them that’s seen as flirting somehow. (plus most of the stuff everyone else posted).

I used to always greet everyone with a smile and happy eyes. Either a nod or a quick ‘hello’.

But I got hit on way too often while doing that, to the point where they kept following me.

I’m just trying to be polite!

When I was 13, my dad warned me against talking one-on-one with guys. He said that exclusivity could be interpreted as flirting.

So yeah, that I guess.

there was that time when i was eleven and i started needing a training bra and my teacher gave me a weird talk about keeping bra straps hidden at all times?

i didn’t even know how to properly adjust the straps so they wouldnt slide and i really didn’t need Mr. N’s bra strap advice as an impressionable eleven year old

Honestly, even making conversation, being kind and genuinely interested in what they have to say can be misunderstood as flirting because so few women do it… For fear that they will look like they’re flirting.

I don’t want to resign myself to ostracising half the human population, so I’m just going to keep being kind and friendly to guys and hopefully it will catch on.

The only inconvenience​ is that sometimes you have to clarify your intentions, if a guy does (understandably​) misinterpret the situation but that gets easy to do after the first couple of times.

whenever I’m talking with a guy I’m always super conscious about not mentioning too soon/too late that I have a significant other.

Thankfully since becoming engaged, this is less and less of a problem as my ring sort of speaks for itself on its own without my input. 🙂

In addition to what others have mentioned, I’ve had to deliberately force myself to stop squeeing or smiling at puppies being walked by single men who aren’t obviously gay, because of the frequency with which interest in the puppy gets interpreted as interest in the human.

So many times, just being friendly and polite have been taken as “showing interest.” A few times after being asked out, there was the whole “why were you leading me on?” followed by, “… b*%ch.” How does being genuinely nice make me a b*%ch?!

During the teenage years I realized that my male friends started dropping off because they assumed my friendship meant I was really in love with them.

Sure, I’ll do small talk and am friendly but I won’t ever let you know me or try to get to know you unless I know for SURE that you’re not one of those guys who thinks that women are incapable of holding an engaged conversation unless they crave the D.

Being bigger definitely reduces a lot of what I’ve read here. I was a nice, friendly, not skinny but not overweight girl a few years back and i couldnt look at a bloke without being harassed.

Now I’m not-so-skinny lol but the problem has done a 180, now i cant have a conversation with a bloke at a bar because they panic thinking a fat chick is hitting on them and wont give me the time of day.

I know this seems sad, and honestly I wish there were a better way, but I will almost always find an excuse to not be alone with someone who I can sense has an interest in me while I have none in them.

I’ve just had too many people ‘make their move’ without just telling me how they feel. As a result, I avoid and that shit gets really fucking difficult sometimes.

I’m thinking more in terms of social media, but I’ve found if a guy messages me and I send back so much as a polite ‘hello’ that guy will never leave me alone.

Every couple months he’ll pop up trying to start a conversation, usually being rude or lewd, long after I’ve stopped messaging him. Last time it happened the guy had been trying this for a while and right now I’m 7 months pregnant and in a serious relationship and I just went off on him. It’s so sad that it has to come to that.

And I know it’s just a few delusional, ridiculous guys that do this but Jesus…what on Earth makes them think this behavior is ever going to get them anywhere?

I’m a southern girl. I call everyone sweetheart, love, darling and hun. And I mean everyone. Even if I hate you, it’s “oh, bless your heart darling” haha.

But I’ve learned that with my male friends, I have to be very careful. As a lesbian, they tend to think that if I call them hun.. that it must mean that they have the magical powers to turn me straight.

I have a few male friends who don’t hide the fact that they would love to do the dirty with me. I tend to try not to talk to them a lot because I hate to make them feel like I was leading them on. I tend to make sure with them that I really watch what I call them.

But I mean, it’s hard. I don’t even remember half of my friend’s names sometimes because I am used to calling them terms of endearment.

One time I was taking the greyhound bus for the first time by myself. Asked a random guy where the line for where I wanted to go was. He didn’t know but he was also looking for the same line. We agreed to look together (why not?) and ended up sitting next to each other and chatting.

2 hours into the 5 hour bus ride he says he’s “tired” and then falls asleep. Wraps his arm around me while he’s “asleep” and then starts kissing my neck. I was so uneasy and scared in that moment bc I didn’t know how he’d react to me pushing him off and I didn’t want to make a scene. Also the seats were all full, half with actual sleeping people so switching wasn’t really an option. I was leaning almost fully into the aisle to get away from him.

Eventually he “woke up” and THEN asked if I had a boyfriend and wanted to date him. I promptly turned him down and listened to music for the next 3 awkward as hell hours

Not female, but I’ve noticed one. Bananas. Women don’t peel it and then slip its length into their mouth. They break it off in small chunks.

Guys, otoh, just gobble down on that thing…

All of these are totally true, and I stand by that statement no matter what.

What else would you add to this list? We’re all ears in the comments!