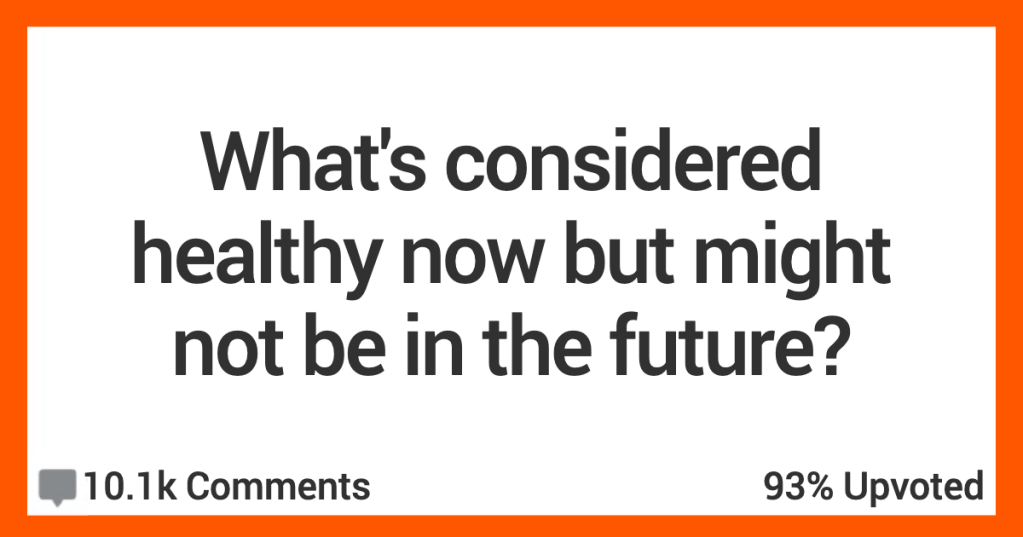 It’s no secret that people’s opinions on things change as the years go by. You know better you do better, and science is always evolving and forcing us to (eventually) change our behaviors.

Now, people today might be into arguing whether or not scientists actually know what they’re talking about, but I have to believe that in the future, more than a few people will come around.

When they do, here are 16 current “health” practices that they’ll probably give the serious side-eye.

Even those that have limits, kids and babies on tablets is unhealthy for brain development.

Just…. Doing the same thing every day. Wake up, go to work, come home, how was your day, eat dinner go to bed. Repeat ad nauseam.

People thinking they’re “getting” something out of social media and that it’s not affecting them.

On a serious matter: I’m not yet 40 but my wife and I have already had an “end of life” talk about what to do with me when my memory, which is already deteriating, goes completely.

When it goes beyond forgetting where I put things or forgetting to put the milk back in the fridge When I stop remembering her name, when I forget who she is to me, I’m to be put into a home and she’s to move on with her life.

11. That doesn’t qualify as balance.

The current work life balance some of us have. 5 days with only 2 days off is NOT a good balance!!

“grind culture”. you’re not getting ahead, you’re setting yourself up for a stroke from stress. your health costs money too, especially mental well being.

Any juice that “cleans your body”, no your body does it itself.

Vaping instead of smoking. You’re still filling your lungs with stuff that shouldn’t be there in the end. Looks like more research is coming out about the risks too. It’s not as bad as smoking, but it’s got its own issues.

It’s fine if you’re using vapes and e-cigs to quit smoking, but it’s gone beyond that for quite some time now. Many people just exchanged one habit for the other.

The unhealthy obsession with work. “Grind,” “hustle,” “side hustle,” etc

Sure, work hard when you work. But work someplace you can have a work-life balance that is healthy and doesn’t demand too much of you.

And it’s probably pretty unhealthy to breath in aerosolized droplets of oil.

Not “healthy” per-se but ubiquitous in society today: plastic containers for everything.

Most people don’t realize the amount of microplastics in food and drinks will eventually cause serious health issues.

4. The addiction is real.

The amount of sugar in food.

There’s been a really weird trend of people drinking “alkaline water” that has a pH of 9.5 or some shit. Here’s the truth about it: the second it comes in contact with your stomach acid, it’s not gonna be alkaline anymore.

The pH of your body is most likely fine, and if it actually isn’t, you should be in an emergency room instead of listening to some snake oil salesman

2. It should be the opposite, and yet…

That if someone doesn’t have a social media, it’s a red flag.

1. Our brains are being re-wired.

Believing this list requires an awful lot of faith in humanity, so I’m not sure.

Do you think these are accurate? Would you add something else to this list? Let us know in the comments!