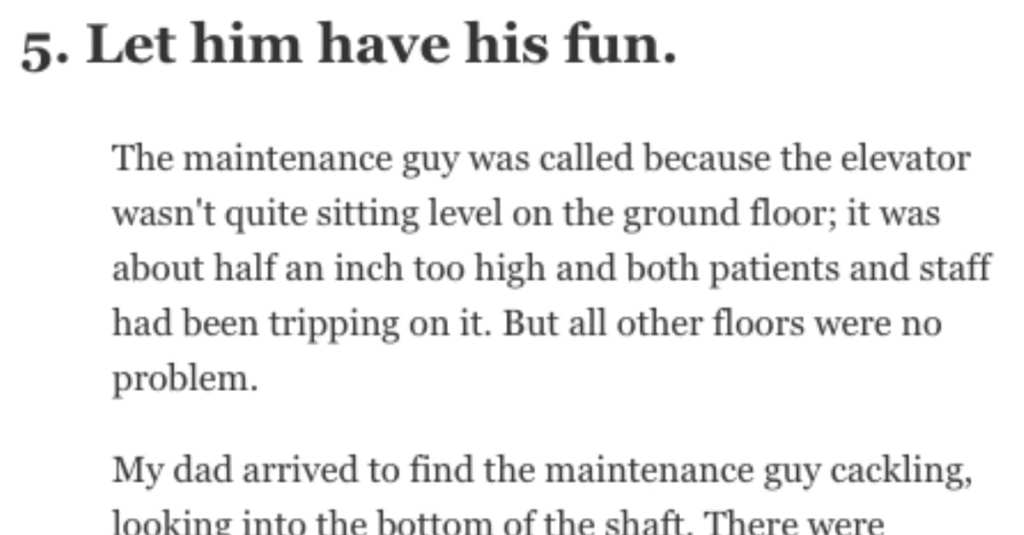 There are people who do all kinds of maintenance work out there, and the thing about working in any kind of business that brings you into contact with others – or into spaces other humans occupy – is bound to have some funny stories.

Lucky for all of us, these 16 elevator maintenance workers are here to share theirs.

One of my baseball coaches when I was a kid lost his glass eyeball in the elevator shaft.

15. Talk about going above and beyond!

I once accidentally lost my drivers license down the little gap in the elevator doors, just dropped it and was super unlucky as it slipped through.

It turned up in my mail 10 years later! Obviously long expired, but still crazy some maintenance guy found it and bothered returning it.

One time, we were doing a rip out at an old factory. They were gutting them and turning them into luxury apartments. The elevator we were taking out was a shitty old freight that hadn’t run in years. When we finally ran it up, we went down to inspect the pit. It smelled like a dead body had chilled there for half a century. The bottom floor wasn’t lit so I shined my flashlight under the elevator and the whole floor started moving. Roaches. Nasty

Haven’t really found anything fun though. I’ve cleaned out more pits than I could count too. I gave my mom a cheap ring I found. Found a pair of underwear at a hotel. Found a full packet at a courthouse of some lady’s case transcribed. Oh, I was on a mod once and one of the hoistway doors had an advertisement sticker for a tennis restringing service. Which was weird because it was somewhere only an elevator guy should be able to reach. I called the number, but it was out of service. I’ve found some cool grafitti from the 40s. That’s about it

I worked on escalators for a year and a half. There was a lot more in those pits. I was taking home bent up quarters every day. There was lots of shoe bits and I was always nervous of coming across used needles in certain units

13. I think someone left those there on purpose.

Worked at a hotel. Guest dropped their phone down the shaft. After a few failed retrieval efforts, we called the elevator guys. They went down got the phone and also found a carton of eggs. Rotten, but not cracked. I don’t even understand how that could happen accidentally.

Not a technician, but do work at a large hotel. A few years ago one of our elevators stopped working. Turned out when they opened it up they found a 3-ft pile of guest folios that were never delivered to the rooms.

Later when we looked on the camera we found it was a security guard that got tired of delivering them to the rooms and instead dropped them down the elevator shaft. He did this for months until he was caught.

11. Someone is missing those!

Well over 1500 tax returns at the bottom of the ATO’s north brisbane office elevator shaft.

This question should be my jam, but unfortunately I’ve never found anything interesting.

$2 coin once, a dime bag of some unknown drug, plenty of syringes, or sets of keys.

My dad was an elevator mechanic for about 15 years.

He had a very dark sense of humour and would come home with some of the craziest stories. (For example, any time he was in an elevator, he would shake it a little or tap on the displays or buttons and go ‘Yep. Total piece of crap. Inferior piece of crap.’ and I think he mostly did it to freak people out.)

One of my favourites:

My dad saved it and gave it to the building manager to see if it belonged to anyone in the building.

It was the one time he ever told us a story that involved him saving an animal instead of finding dead ones.

The elevator guys in my dad’s office complex found pieces of a dog’s skeleton.

Snakes had gotten into the pit and were climbing up and dropping down on people as they rode the elevator.

Guest reports waterfall sounds in elevator shaft en route to the lobby. Investigation ensues. Sump pump at bottom of shaft is running constantly. Water is still coming out of the drain it’s connected to after I unplug it.

Over 7 inches of clog in the pipe. Apparently it was clogged so bad that it was backing up into the laundry room, the drain for the elevator shaft and the rooms closest to the main pipe out of the building (first floor suites).

Solid turds were left at the bottom of that shaft. I quit about a week later for unrelated circumstances.

The maintenance guy was called because the elevator wasn’t quite sitting level on the ground floor; it was about half an inch too high and both patients and staff had been tripping on it. But all other floors were no problem.

My dad arrived to find the maintenance guy cackling, looking into the bottom of the shaft. There were probably tens of thousands of magazines down there. They had to get a bunch of shovels, a small crew, and a rolling dumpster to clear it out.

When it was all done, my dad decided to stay behind and pretend to read a newspaper while he sat in the lobby. After about half an hour, he sees an elderly patient holding a magazine, shuffling slowly toward the elevator. He stops in front of the doors, glances left, glances right, and quickly stoops down, slides the magazine into the gap, and shuffles away as fast as he can with a huge grin on his face.

My dad could not help but laugh hysterically. This guy had probably been sliding magazines in there multiple times per day, every day, for decades. I should ask him whether he reported it or let the guy have his fun. Wouldn’t surprise me if my dad went with the latter.

Keys. Trash. Bugs if the building is exceptionally shitty. Mostly dirt and dust.

Found a paint roller that the last guy left there once. It was stuck to the floor.

Not a whole lot of weird stuff can make it between the sill and the landing.

3. I wonder how long he’d been waiting to see that.

2. Why are they always surprised?

Worked security in a large department store, we routinely had to pop it open to retrieve dropped keys, wallets, and phones.

Recovered a $2500 gold necklace covered in poop.. a would be shoplifter darted out of our jewelry department and “suitcased” the necklace while in the elevator. When he realized we were waiting for him at the exit level he went back up a floor, removed it, and dropped it down the shaft.

We arrested him anyway, much to his surprise.

A couch. Not joking.

It was a walk in pit that a homeless person had retrofit into a small living room.

I just do not understand people, y’all!

If you work with people, or do maintenance in public spaces, tell us your best story in the comments!