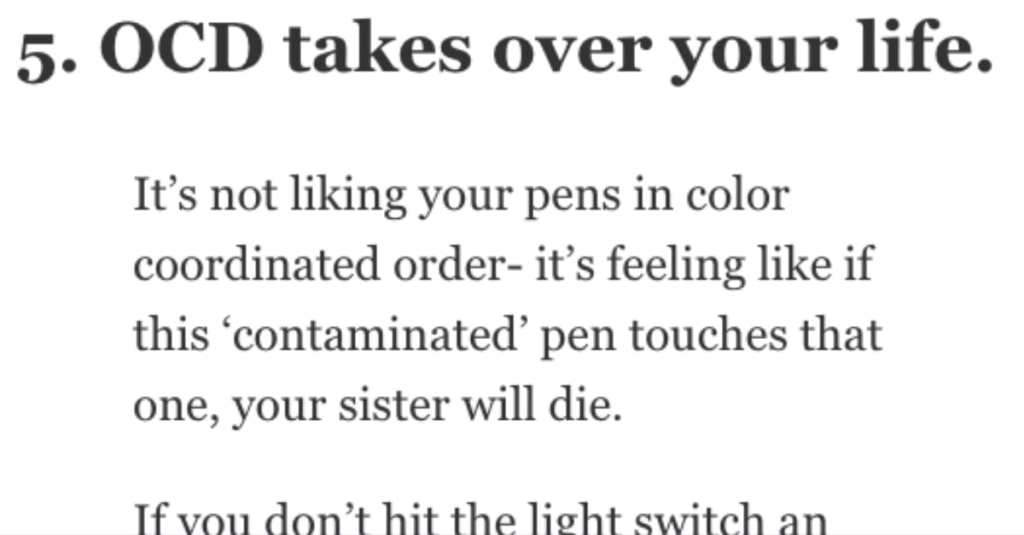 There’s been an effort in recent years to de-stigmatize mental illness in general, which is fantastic.

We’ve come a long way in talking about depression and anxiety, and with normalizing talking therapy, but when it comes to some mental illnesses, the stereotypes are still going strong.

That’s definitely the case with these 16 illnesses, and knowledge is power.

I have gender dysphoria and as a teen I starved myself to look more like a boy and so that my menstrual cycle would stop (amenorrhea caused by weight loss.) I also felt dirty and being thin made me feel clean and empty.

I hated myself and wanted to not exist. I literally wanted to starve myself into nonexistence. Vanity didn’t enter into it.

Schizophrenics don’t always hear voices. With mine, I hear people trying to break down my door, trying to open my windows, and movement under my house.

Schizophrenia often involves extreme paranoia rather than evil voices; my Bio Psych professor told us how her BIL, if off of his medication, believed that if he left the house for any reason someone would break in after he left to unplug the fridge and spoil all the food.

Mood/anxiety disorders do not need an objective reason for occurring – you don’t need to have a shit life to be depressed or to be in at any actual risk of something bad happening in order to have anxiety. They can just happen randomly or in connection to things that happened far in the past.

Therefore, the common notions that someone is ungrateful for being depressed or having anxiety or that they’re faking it because they “have no reason” to suffer from them is absolutely flawed and the attempt at “fixing” them by pointing out the good things in somebody’s life is futile and antagonizing.

OCD is not about being tidy and clean. It involves rescuing, intrusive thoughts and obsessively cleaning is just one of OCD related compilations. It can seriously f*ck up someone’s life.

An example would be turning a light switch on and off 30 times once entering a room or you fear something terrible will happen if you don’t.

It really annoys me when someone calls themselves OCD because they like a clean kitchen.

If you get angry and go off on someone they ask, “are you off your meds?”

That depression only makes you sad. There is a myriad of other feelings, and physical symptoms.

10. Most people are just average.

Mental illness does not make you particularly dangerous or a genius.

9. And it gets worse with stress.

Not everyone with Tourette syndrome randomly yells out obscenities.

7. It can happen to anyone.

Most people with PTSD and/or CPTSD haven’t been in the military or a war zone.

People with anxiety being highly strung, or nervous about things.

It can manifest itself in that way, but it’s more like there’s always something at the back of your mind that needs doing, but you’re not sure what. Even if you know what that thing is, you can see the end goal, and maybe even the steps to getting to that goal, but staying on that path requires you to fight with self doubt, and the “what ifs” that plague your mind when you’re on the way there.

Also, you can appear quite well adjusted in social situations, but in downtime, overthink every fucking thing.

5. OCD takes over your life.

It’s not liking your pens in color coordinated order- it’s feeling like if this ‘contaminated’ pen touches that one, your sister will die.

If you don’t hit the light switch an odd/even number of times, you’ll die.

The rituals can literally take over your life, and you know they don’t make sense, but you can’t stop.

Depression isn’t being sad all the time and crying a lot.

Parts of it can be but it’s different for everyone.

3. It’s much more complicated than that.

That eating disorders are a vanity thing.

And that eating a banana is going to heal you.

I’m an average weight, adult man and it drives me crazy how hard it is to find support in the professional world because I’m “not thin enough”

The sheer exhaustion and feeling of weight. On particularly bad days it’s like I’m wearing a 50lb weight on each limb and a 100lb vest.

People love to say “Exercise and nature will cure your depression!” but it got to the point where I had to stop going to the gym because I was routinely leaving in tears halfway through my workout because I just could not physically or mentally do it anymore.

I have days where I can scarcely physically get out of bed. And all those things that are supposed to give you good endorphins – exercise, fresh air, sunlight, food, even sex… They leave me even more exhausted and miserable.

Now that we know better, let’s do better.

No one likes to be stereotyped, after all.