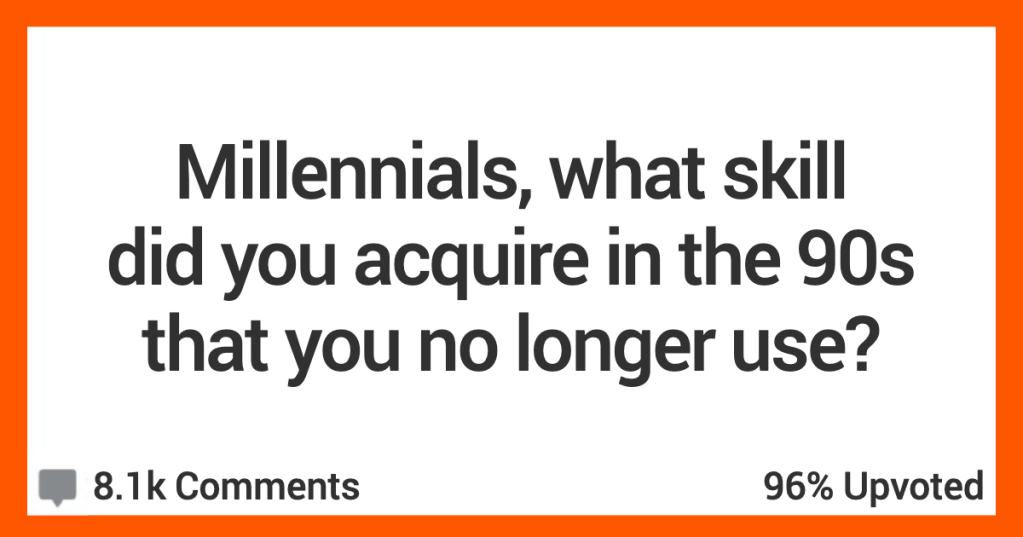 16 Millennials Muse On “Vintage” Skills They Can No Longer Use

Aside from perhaps the industrial revolution, I don’t think the world has changed so much so quickly as it has in the lifetime of someone born in 1980.  Technology has evolved like mad and we’ve all just kept up, because what choice do we have?

This also means that we’ve developed a lot of different skills in our lifetime, and also that a good number of those skills are as obsolete as the technology that required them.

These 16 millennials are full of amazing skills that absolutely no one needs anymore.

16. How to make the perfect mixtape.

There was a night DJ here in the early 90s that everyone taped off. He made a point of always saying what songs were coming up in the next hour, then he would announce a song and pause about 3 seconds before starting it. He never said it, but it was obviously set up for people to tape from.

15. None of these words make sense to Gen Z.

How to load paper into a dot matrix printer.

And replace the ribbon.

14. Those were the library days.

I know how to use a microfiche reader.

I (born in 1990) remember being taught how to use a card catalog in both elementary and high school. After teaching us how to use it, the librarian said “You could also use one of the computers to access the OPAC and type in what you’re looking for, it’ll tell you where to find the book.” 🤷‍♂️

Edited to add: I just realised how people from my generation were probably the last to sort of remember how life was before everyone had internet at home but are also young enough to have the internet as the predominant source of information by the time we graduated high school.

I can wire two VCR’s together to pirate movies onto blank video tapes.

I can load slides into a projector for a presentation.

I can also prepare transparent sheets (acetates/overheads) for a different type of presentation.

Nick at Nite started when I was about ten, and I would stay up until 1 or 2 in the morning watching old reruns.

Every time I turned off the TV, I would sweep the screen with my hand, sparking teal fire from my fingertips. Nothing like it.

I commune with the mysteries of the rotary dial phone.

I once won a radio contest as the 10th caller using a rotary phone. I’m still proud of that.

9. There’s still something about it.

I can develop and print black-and-white film.

That smell makes me think of college, cause that’s the last time I developed film and made prints manually. I was that generation that still got taught those techniques, but never really used them in practice.

I still think it was valuable to have that knowledge and gain that insight into analog photography, I hope design schools still have students make pinhole cameras and such. Just not have it taught like it’s a skill you’ll be using in a production context.

8. You gotta have a pencil handy.

Use a pencil to fix my tape of mc hammer, hate it when it gets eaten up by the tape recorder.

Also put scotch tape over the holes on the top of the cassette to record over the existing recording?

Lifting the other phone in the house up silently and breathing quietly and not laughing, to be able to listen in on your families phone conversations.

I learned if you unplugged the phone from the wall, then picked up the receiver, then plugged it back in no one would know you are listening in 🙂

I have the magical ability to… MAIL MERGE. Seriously, no one on my staff can grasp this function.

I still remember my elementary school best friend’s home phone number from the late 80’s. I called him so many times that his phone number is as indelibly marked in my brain as my own childhood phone number.

I can imitate the busy signal tone perfectly.

Not to brag but I once made it all the way to Oregon without my party dying.

If we go bowling, I can keep score on a sheet of paper.

i can’t believe they tested us on that in PE.

1. Do they make cars with chokes anymore?

Start and drive away in a car with a choke.

The truck I drove when I first got my license had a choke like that. It was an 85 F-150 with a 4-speed manual. At a private school in the mid 2000’s I didn’t even take the key out of the ignition because I knew no one else would know how to drive it.

It’s wild to think how much knowledge we have gained and then discarded in our lifetimes, isn’t it?

What else would you add to this list? Let us know in the comments!