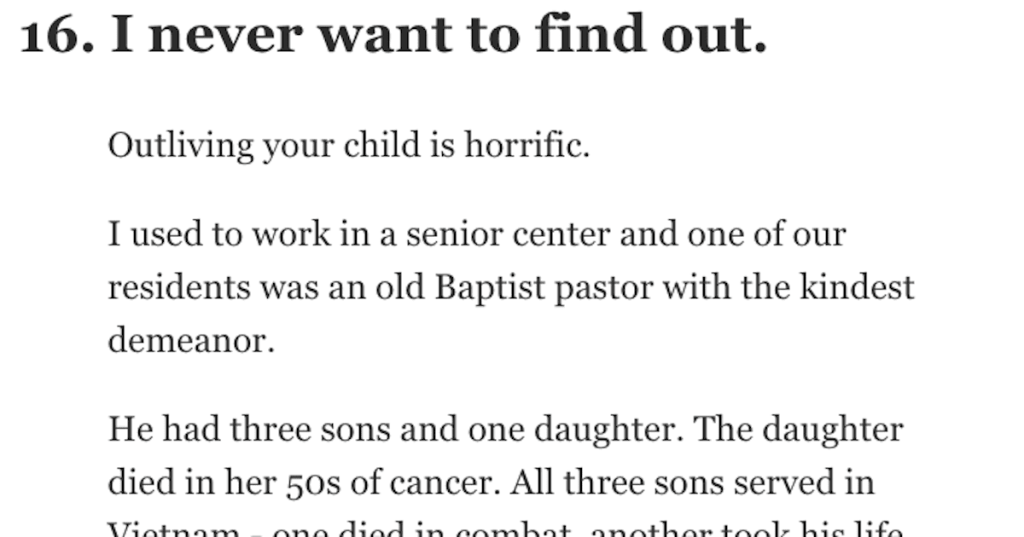 We’ve all obviously heard the saying that something is “a fate worse than death,” but have you ever spent any real time thinking about what that might mean for you?

I mean, maybe not, because it’s not all that comforting of a thought, those things that would make dying seem appealing.

These 16 people are thinking about it, though, so I guess we might as well go along for the ride.

Outliving your child is horrific.

I used to work in a senior center and one of our residents was an old Baptist pastor with the kindest demeanor.

He had three sons and one daughter. The daughter died in her 50s of cancer. All three sons served in Vietnam – one died in combat, another took his life, and another died of cancer due to Agent Orange.

After he told me all this, I (an agnostic myself) asked him how he has been so faithful. He just said “if I didn’t have a reason to believe this would all make sense someday, I would just fall apart”.

That just straight ripped me into pieces.

Everything leading up to dying in the ICU.

Families of 85+ year olds with multiple co-morbidities force us to keep “doing everything” to keep people alive far beyond any chance of recovering with any quality of life or dignity.

Ever done CPR on a frail old body that weighs 95 lbs? The feeling of the cartilage and ribs crushing under your hands is something we never forget.

After a few rounds of compressions, you can see a very obvious cavity in the chest that we have smashed into oblivion. And all for what? So the person can die in misery?

Often, these people have written Do Not Resuscitate and Do Not Intubate requests, but the family can override these once the patient is unable to participate in the conversation.

Then we get people 85+ years old with catastrophic strokes. Family decides to “do everything,” so the patient ends up with a trach (hole in the neck) on a ventilator (breathing machine), a PEG tube in the stomach for liquid tube feeding, and resigned to bedrest for the remaining miserable months of their life. They will probably ultimately die of a steady but slow weight loss, horrible infected wounds from prolonged immobility (I have seen bed sores down to the bone and large enough to fit my fist in to), or infection (like pneumonia). All for what?

Then you get the younger ones, but the ones who are far past any sense of recovery. Some of the worst to watch are people with liver failure from alcohol abuse. They go through severe and difficult to manage alcohol withdrawal, in which they are confused, combative, and hallucinating. They are often sedated to the best of our ability and restrained for their own safety. Then come the bleeding problems associated with liver failure. I’ve seen someone go from talking to me and laughing to dying by vomiting all of the blood from their body due to esophageal varices (bleeding arteries in the throat/stomach). It looked like a murder scene, and the the patient was awake and aware she was dying as she bled out in front of us.

So if you talk to anybody who works in critical care, they will often have many examples of things worse than death. We essentially torture people every day. We see that slow, inevitable spiral down. We try our best to be realistic with patients and families, but it often doesn’t work.

14. Too awful to contemplate.

If you kill your child but don’t mean to, like fall asleep while them in the bed and roll on them, or accidentally tripping and… splat.

Or like I recently saw on house where a lady went fucking crazy or some shit and strangled her child because of the voices in her head but when she was cured and found out the baby died she was bawling and shit.

Locked-in syndrome. I’m a healthcare worker (RN) and have seen it a handful of times.

The patient looks at you, and you can tell that they’re in there… but they’re unable to walk, talk, eat, scratch their own a$s, nothing.

Being the only survivor, you carry the guilt of not being able to save everyone

11. Definitely never want to experience this.

I saw a guy that was playing with gasoline get burned alive.

The smell and sounds that he made were something I will never forget.

Luckily it only lasted him a few minutes before he passed out. But the next 10 years and hundreds of surgeries were terrible. He said many times we should have let him die.

10. Sleeping is one of my favorite things.

Being forced to live in a vegetive state on life support because your friends/family won’t let you go.

8. And wonder why you haven’t.

Seeing everyone close to you die. It makes you wish you died with them.

Being the child in a child sex trafficking situation.

Torture or slavery for about 80 years.

5. Being any part of this tbh.

Being the “Middle Piece” in The Human Centipede.

Being in an Infinite Death loop and no way of escaping.

Separating you from all the living things and putting you into a confined room with a giant mirror and the lights on full brightness 24/7.

Locked in a room and forced to watch The View.

1. It definitely would be the worst.

I think that having a child disappear and never knowing what happened is likely the worst thing in the world.

Never knowing when it is appropriate to stop looking.

Even when your despair seems too much to bear for even one more day, you know that killing yourself would end any possibility of being reunited.

I need a drink.

That was not at all uplifting! But go ahead and add your answers if you’ve got a different one…