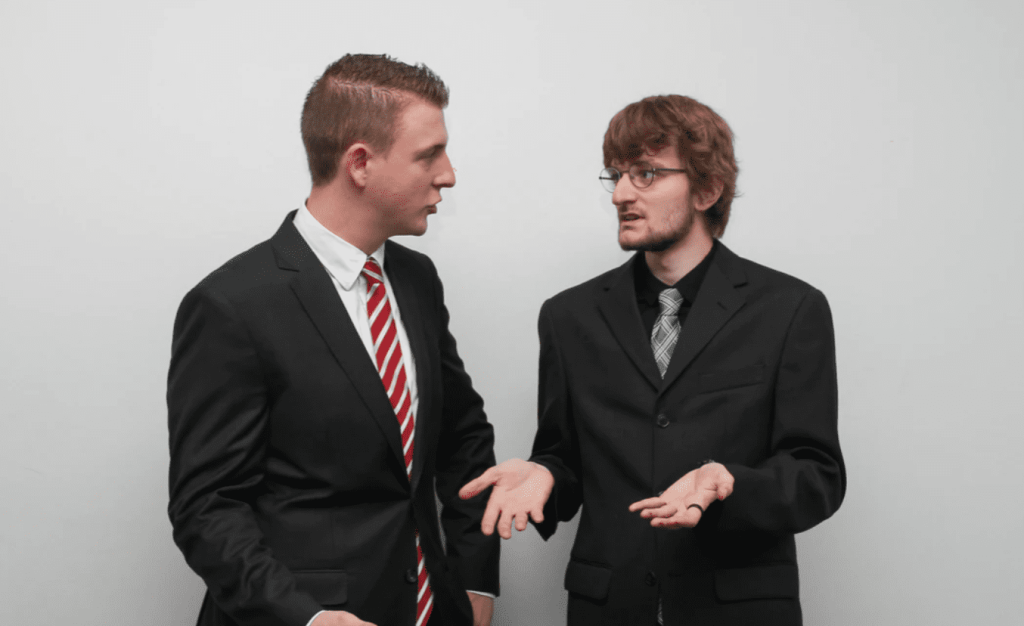 A great comeback to an insult is like a fine wine…it just gets better with age.

And it’s not easy to come up with a good comeback, let me tell ya!

But they do exist and when they are executed the right way, you just have to admire the person behind them.

Let’s check out some killer comebacks from AskReddit users.

Carrying a bunch of books for the teacher. Some joker thought it was funny to pretend to fall right in front of me.

I told him: don’t fall for me man.

My whole book carrying crew and his prank crew all started bursting into laughter.

I didn’t register what had happened until much later.”

“It was a exchange between 2 co-workers a few years back, basically a slut shaming gone wrong. Person A had only ever slept with one person, their previous boyfriend that they were still obsessed with.

Person B was the opposite and would bang a different person every week.

Person A: “I can’t believe how many people you’ve slept with, I don’t understand how people can have s*x with someone they aren’t in love with”

Person B: “Well your ex-boyfriend seemed to manage it okay”

Person A: silence as he dies inside.”

“Was out with a friend who was wearing a silly outfit.

Someone came up and said “Why are you wearing that, it’s not Halloween!”

He replied with “Then why don’t you take off that hideous mask?””

“I have a twin brother. I’m older.

He once told me when I came out, they knew it was a mistake and immediately tried again.

I told him he was the “buy one get one of equal or lesser value free”.

There was a fight after that one.”

“In high school, we congregated in our clicks around the benches. One friend is cracking his knuckles and did this fairly often.

Weirdly enough no one laughed, we just all shrugged and took it as a logical explanation.

Lady Nancy Astor: Winston, if you were my husband, I’d poison your tea.

Churchill: Nancy, if I were your husband, I’d drink it.”

“Working construction remodeling apartments and we were all done for the day. Hanging out in the parking lot chatting.

Guy walks up, who we could tell he had Down syndrome and asks what are we up to. The smart-*ss of the crew said “about 6’1″ and guy with down syndrome said he didn’t know they stacked sh*t that high.

Best insult I remember to this day.”

“An older guy I used to work with was overweight. L

ike, had big old belly that hung out past his belt. This skinny punk always made fun of him, even touched his belly and would say comments like, when are you expecting, etc.

Finally he had enough one day. The skinny guy said, “damn your belly is so big.”

The old guy replied, “it’s because your wife likes sucking d*ck in the shade.””

“Between to ferns with Obama.

Zach: “It must kinda stink that you can’t run three times.“

Obama: “ No, actually i think it’s a good idea. If I ran a third time would be kinda like doing a third hangover movie. Didn’t really work out very well, didn’t it“”

“This short guy at a bar was talking sh*t to my friend and he said “I’m going to be the bigger man and walk away.”

To which my friend replied, “you will never be the bigger man”.”

“In high school me and my boyfriend (we were gay) were walking together and some dumb*ss came up and said “Why are you guys always together? What’re you, gay?”

“Arguing with my mom for the millionth time, and she would always say something along the lines of “you’re just like your father”.

One day i got tired of it, and told her:

“I’m not like my father, i’m smarter than him”

Didn’t talk to me for a couple of days.”

“I was at a friends house and his drunk parents were fighting, Nothing new.

Mom yells loud enough for me, friend, and his little brother to hear “Oh, big tough man. Why don’t you go tell those boys why you can’t even get it up!?”

Dad replies “They already know why, and if you go look in the mirror you’ll know why too”

We laughed so hard she kicked us out of the house.”

“Being a lesbian, I get the ‘you never had a real man’ pretty often.

Someone stood up for me: “well no one around here…””

“A French manager and a Karen were arguing.

Karen: ‘the customers are kings.’

“My brother was in his history class that just happened to have accumulated all the really disruptive and not-so-intelligent kids. They’d constantly interrupt and make the class hell, and the teacher didn’t really do anything about it.

One day, a girl who had caused a ton of problems acted up in the usual way to derail the class and he had had enough. He turned to her and told her to shut up and she flipped.

The teacher told her to be careful what she says to him, because she might be working for him one day. My brother turns to the teacher and goes, “Nah, I don’t plan on being a pimp.”

The class loses it, the teacher has to step out from laughing, and that girl apparently didn’t bother my brother for the rest of the year.”

In the comments, tell us about the best comeback you’ve ever heard.