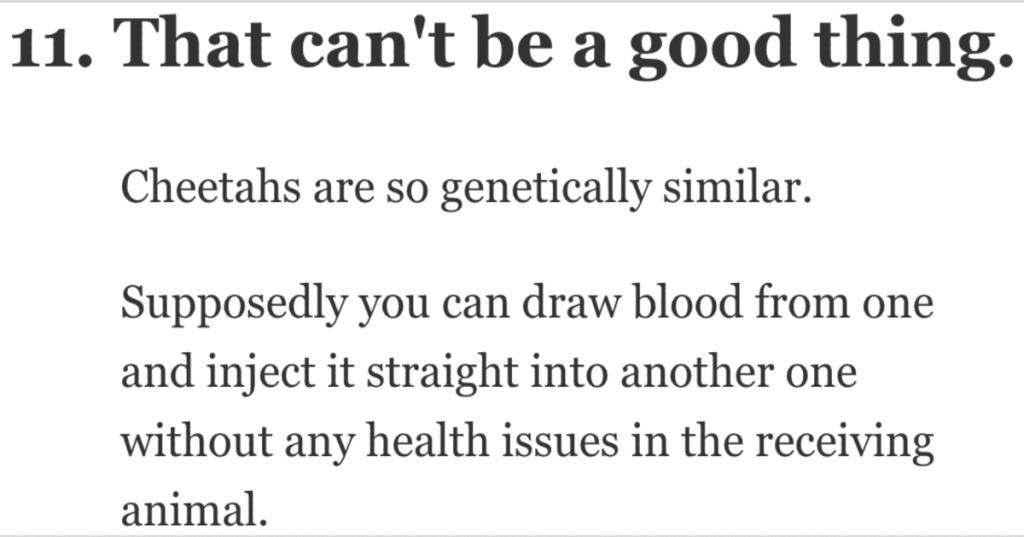 We all have our thing, right? The thing that interests us but bores most other people, or the rabbit hole we didn’t mean to fall down on the internet but got in deep anyway?

Sometimes it’s out of necessity, like super niche research, too.

Whatever the reason, we’re always reminded that it’s not everyone’s thing when we bring up some obscure fact only to get some pretty strange looks – and today, these 16 people are sharing those facts with you.

In the 1960s or 70s, the Swiss Air Force dropped severed chicken heads all over the forests of Switzerland.

The chicken heads contained the rabies vaccine, and the airdrop was to vaccinate wild foxes against rabies.

Octopuses are usually very antisocial but when they’re under the influence of ecstasy they are more willing to spend time around each other or even hug other octopuses.

Your body’s normal functions can slow down to accommodate organ disease. For example, I have 40% lung function, but my O2 is completely normal at 98% saturation.

They didn’t discover any lung disease until I had a ct scan done for other reasons and my lungs happened to show up in that.

13. This is how Bigfoot rumors started.

When you are starving, and have little body fat left, your body can grow almost fur-like hair to insulate itself in absence of fat.

The song “Total Eclipse of the Heart” was originally written for a musical featuring vampire romance. That musical never saw the light of day but the song was tweaked for recording and wound up being a big hit for Bonnie Tyler.

It feels like a weird fact to know for some reason.

Cheetahs are so genetically similar.

Supposedly you can draw blood from one and inject it straight into another one without any health issues in the receiving animal.

There is a chemical called MPTP that specifically destroys dopaminergic neurons in the brain. About 3 days after someone ingests it, they get parkinson’s disease.

It’s a byproduct of synthetic drugs. Some young people showed symptoms of Parkinson’s out of the blue a few decades ago and that’s how they found out about it. The drug has been very instrumental in learning the causes of Parkinson’s

Coca-Cola can help with blood stains.

Being steamed alive allows the victim to feel nearly everything because your nerves don’t get destroyed as fast as being burned alive.

They can’t even take five steps without dropping at least one turd.

Cuttlefish mating is fascinating. The females all hunker down while the big males fight each other for a chance to copulate. While the big tough males are duking it out, small males will kind of pull in their tentacles to look like females, sneak past the fighting males, and mate with the females.

Interestingly, female Cuttlefish have some control over which sperm makes it to the eggs, and overwhelmingly choose the cunning small males’ sperm over the big brawny males who come in to mate after finishing fighting. Brains over brawn.

In Phoenix, Arizona, you are legally allowed to bury a dead body on your property without asking for permission/getting a permit/etc.

The city asks that you contact them beforehand so they can send someone out to stake for gas/electric lines, but it’s not required.

If you spill bleach on your skin, the slippery feeling you feel when you wash it off is because you have basically made soap by dissolving the top layer of skin.

You can track the Lewis and Clark expedition across America because they left mercury deposits wherever they went.

They lived on a diet of dried meat which cause constipation, so they were all taking these mercury pills called “Thunder clappers” to make themselves shit.

Michael Jackson’s hair caught on fire at the exact median day of his life. He had a literal mid-life crisis.

It probably also led to his death. It was such an excruciating accident (and it being the 80’s) he got hooked on some really heavy pain killers. A lot of people think the accident is what lead him to his really bad drug problem.

1. Of course they would.

If provided with a mirror, dolphins will admire their own genitals.

I love weird facts, so frankly, these are all awesome.

What do you know that always makes people give you strange looks? Tell us kn the comments!