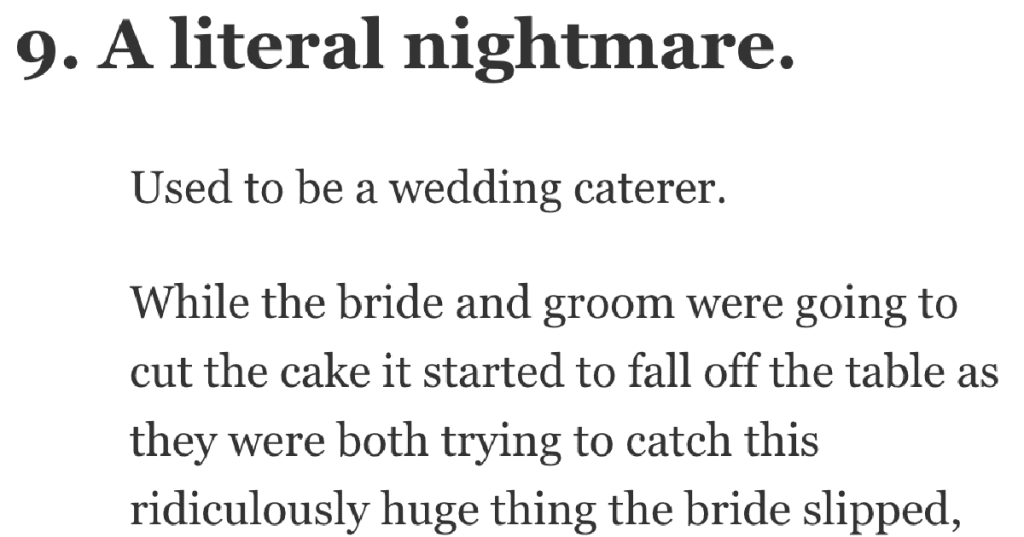 We all try to do our best to follow rules and regulations that are in place to help keep people safe. That said, accidents happen, and sometimes the results can be really, really bad – haunting, some might say.

These 16 people have some stories to tell, but make sure you’re ready – because after you scroll through this list you might not be able to forget them either.

I used to fly small airplanes in north west Alaska. In the two years I worked there I knew three pilots that died in crashes.

Don’t miss how those days felt.

While building Levi Stadium, a trucker was unloading rebar when the entire pile fell on him, impaling him multiple times and also crushing him.

I never met the man, but his cat and elderly dog ended up a a local shelter. We planned to adopt the dog and ended up taking home the cat too because we didn’t want to split them.

Nena (the dog) passed away in her sleep in 2017 about 2 years after we brought her home. Seal (the cat) is around 7 years old now and doing just fine.

I’ve always wondered if they ever thought of him.

14. They saved the fingers…sort of.

Coworker, who was fresh out of trade school was using a table saw to cut 1” thick sheets of plastic into strips. It was cold so he put on some leather work gloves.

A glove got caught and pulled his hand into the saw, nearly severing his right index and middle fingers.

He came to me and said, “uh, I think I cut my hand”. It literally looked like a package of pork ribs – all mangled bone and tissue.

They were able to save the fingers, but they’re non functional and don’t bend.

Worked for Edy’s Ice Cream. My truck was loaded wrong so at a stop had to shimmy between pallets to get to the back pallet.

Was unloading the top pallet and the pallet below collapsed. The top pallet slid on to me. But since I was between 2 waist high pallets about 1200 lbs of ice cream bent me at the waist the wrong way.

Ended up with 2 broken vertebrae, nerve damage and was not fun.

Eventually got a six disc fusion and was able to walk again.

But now I have arthritis in my back and it really hurts most of the time. I also have numb areas in my right thigh and my whole lower back.

The time we almost killed a customer at the restaurant I worked at. He had a milk allergy that we didn’t know about, so we made his food on the same grill as everything else.

Apparently his allergy was severe enough that he spent the weekend in the hospital because of anaphylaxis from cross-contamination.

He was super nice about it and acknowledged that he really should have told us. He remained a regular for the 2+ years that I continued working there and our systems changed drastically to accommodate allergies.

Engineer opened a parcel with a Stanley knife, not sure if he slipped or angle he was cutting at but BAM!

Stanley knife in the eye.

Not me, but at the cookie factory where my brother worked a worker died when someone accidentally dumped out a massive mixer full of molasses on top of him.

He suffocated before they could dig him out.

Used to be a wedding caterer.

While the bride and groom were going to cut the cake it started to fall off the table as they were both trying to catch this ridiculously huge thing the bride slipped, fell into a pyramid of wine glasses on a foldout table behind her…

The table collapsed and a wine glass stem pierced her neck.

She survived, but she was not gonna be able to take that gown back to the rental place… I’ve never seen so much blood in my life.

Worked at Sonic when I was 15. I was on break and sat on the patio. I was looking at the road as this super nice car pulled into the drive through. As the car turned, a motorcyclist flew right into the side of him. He flew about 10 feet in the air before landing right on his leg. He slid about 8 feet before hitting the curb.

His leg snapped into two pieces and his leg was basically degloved. I sat in shock before people started screaming to call the police. I ran inside and told my bosses. Three of them ran out while the other workers started shutting down the store for the ambulances and police. I was the only one who saw what happened.

His face was skinned, leg was degloved. His fingers went in all directions. But It wasn’t the sight that scared me. It was the weezing noise that he made as he slowly started gaining consciousness. He was mouthing the words “Help me”. But his lips were gone. He could only make noise. I didn’t work that day, and cried the whole time he was being put in the ambulance.

The worst part was, the car who hit him, drove off without staying a second. The owner of the car was eventually found, but nobody was charged.

A few months later, the victim of the hit and run, came to sonic. He lost his leg and was still in the process of recovery. The guy came to thank us and let us know how he was doing. Glad to see he survived, but still traumatizing nonetheless..

I dunno if you can call this an accident but I was working with this guy and outta nowhere he says “I’m sick of working here, check this out” and jammed his foot into the gears on the machine. Completely mangled his foot. Saw him 20 years later and his foot was still fucked.

He was looking for a couple weeks of workers comp, got a lifetime disability instead. It was pretty horrific.

I think it was the day before thanksgiving 2012. There was a news story about a guy trying to reach something off of a platform at a local paper mill. He fell into a nearly boiling hot tank of caustic solution with spinning blades in it. There was absolutely nothing left.

I have worked over those exact tanks numerous times. It’s an old facility, but if you don’t follow their safety policies right down to the T they will throw you out in a heartbeat.

That’s just a terrible way to go on one of the worst days that it could happen if the year. I think about it often.

Trench collapse. Guy was pinned mid chest. Not good but not immediately fatal. Guy’s coworkers freak out and use the backhoe to dig him out. Ended up catching him with the teeth on the bucket. Essentially cut him in half.

The guy on the backhoe was his brother.

Dude would have probably been alright had they rescued him the right way.

4. There was nothing they could do.

Worked at an industrial setting, had a contractor come in and use a hydraulic ram to pull a bearing about the size of your head. They didn’t hook up the lines correctly and 40,000 psi of fluid hit him in the neck and almost decapitated him. I

t took out part of his brain stem, I got there for the death rattle. Blood everywhere, we couldn’t help him. He was in his early 20s and his wife just gave birth a few months prior.

Work in a dealership and once a tech was using a tool that broke free bashing him in the face, knocking out multiple teeth, splitting his lip and breaking his nose…it was a bloody mess.

Young kid, with balls of steel apparently. While waiting for an ambulance he was sitting there talking and smiled to show the damage. That smile was horrifying.

He recovered and got a ton of dental work and still works there.

Not really haunted, but we had a guy in the Army violate one of the cardinal rules of working in the motor pool; remove watches, rings and dog tags.

He had kept his wedding ring on and was working in the turret of an Avenger (surface to air missile launching system mounted on a HMMWV). When he climbed down the tiny ladder at the back he decided to jump down the last few feet to the ground. His ring caught on the ladder and degloved his finger.

He held up his hand and just looked at it and said, “Oh fuck.” We grabbed him, wrapped his hand (not much blood honestly) and took him to the hospital. All the while another soldier was carrying the fleshy remnants in his hands and dry heaving. Once he was taken in at the hospital they just removed the finger. He became a cautionary tale for all my future soldiers.

I was a cashier in a grocery store. One of my fellow cashiers was a senior, just killing time in retirement. One day, she had a dizzy spell, collapsed, and cracked her head open on the floor.

Paramedics were called, and as they were loading her into the ambulance, she was crying out that she could still finish her shift.

Do you have a story that belongs on this list? If so, please leave it in the comments!