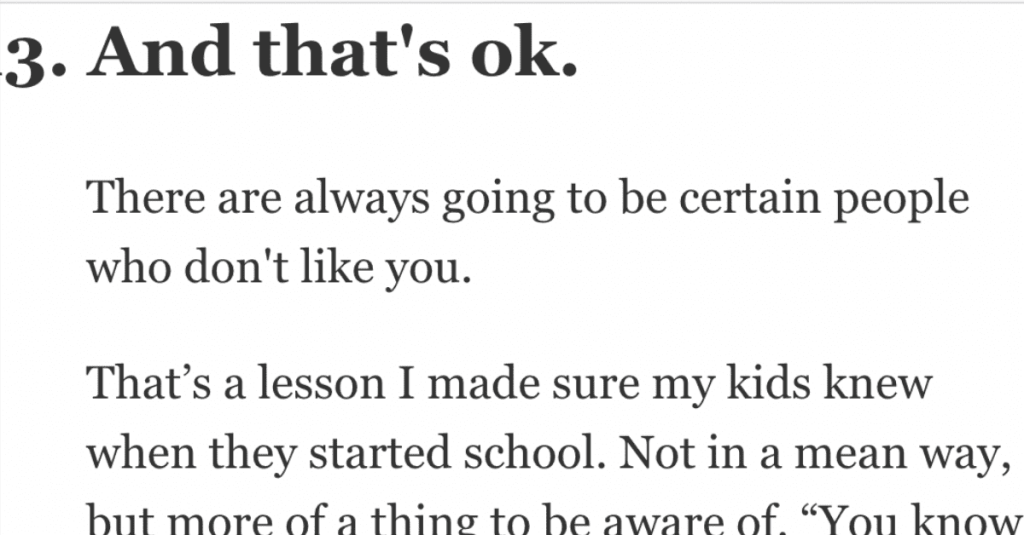 Human beings are complicated, but one thing I think most people secretly crave is comfort. Things that push us outside of our comfort zones, that sort of needle us and won’t quit, are things that we typically avoid.

Reddit asked what truths they think are hard for people to hear, and these 16 replies are all about what human beings will go to great lengths to avoid.

Some people are bad parents.

Being funny or smart doesn’t mean you’re ready to take care if a human being (maybe even multiple) for a good chunk of your life.

Please don’t get kids to fix a relationship either, I’ve seen this too much and it doesn’t work.

15. Not all friends are forever.

Friends will come and go. You will have many friends who one day you will never see again.

You won’t necessarily know it the last time you see a friend.

The last time I saw my best friend before he committed suicide a bunch of us spent all night at a bar and ended up on a nearby beach watching the sunrise. I deployed a few days later. That night is mostly a blur, all I can remember is that it was a great night.

You won’t be young and beautiful forever.

Or physically capable. Men especially identify with their physical capabilities, which inevitably decrease over time, leading to loss of identity and depression in older age.

There are always going to be certain people who don’t like you.

That’s a lesson I made sure my kids knew when they started school. Not in a mean way, but more of a thing to be aware of. “You know how sometimes you meet a person and you just don’t like them? For no reason, they didn’t do anything to you, they aren’t mean, you just don’t vibe? That’s okay, not everyone is going to be someone you like.

But that’s also true about you. Some people just won’t like you, and that’s okay. It doesn’t mean you have to change anything about yourself. You’re just not their people.”

This is a thing that always bothered me growing up, if someone didn’t like me for no reason. And I was a grown ass adult before I figured this out. I want to make sure my kids get a head start on it.

If you don’t take care of your teeth when you’re young, you’ll regret it when you’re old. Brush twice a day.

Flossing is the real LPT, not brushing. Flossing is actually removing the food from your teeth. Brushing is just polishing.

Also, antiseptic mouthwash after flossing, at least once every few days. You won’t believe how many little sores and gum aches you’re preventing.

11. You don’t have to know everything.

“I don’t know” is a perfectly valid answer to many questions.

AND THIS IS OK AT WORK OR IN INTERVIEWS. As a hiring manager, it it legitimately a sign that you are a more reliable and stronger candidate if you can admit you don’t know something. And if a manager expects you to know everything and you don’t, then maybe the job or manager isn’t a good fit.

War can come to your doorstep, everything can change. No country is immune. History clearly demonstrates this.

9. Let this give you freedom.

Most people genuinely do not care about you or your opinions, which is just fine.

I’m fine with that. In a previous job, I would have to tell people, “It’s not that I don’t understand it, it’s that I don’t care.”

People will hurt you.

Corollary is that most of the time it will not be out of malice towards you but rather selfishness for them.

You are the main character in your life but you’re just an extra in everyone else’s.

I don’t think that hurts per se for regular people with normal self esteem, but there are people who are acting like they are the main characters of everyone’s life….and they need to hear it.

6. Even if your mom thinks you are.

You’re not special… but that’s okay because everyone is not special together.

Though Mr. Rogers would like you to know that you are special and he likes you just the way you are.

That you need to stop procrastinating and get that thing you’ve been needing to do done already.

4. Say it again for the people in the back.

Having a University degree doesn’t guarantee you a job.

Back when I graduated with my bachelors I was applying for entry level jobs in my field and was consistently being rejected for not having experience.

If you’re chasing a romance or friendship… the other person doesn’t want to be with you.

It hurts me every time it happens. But its a blessing because it helps you realize your true friendships and true compatibility. Reciprocated love should feel “easy”.

2. Everything has a dark side.

Oxytocin, the “love hormone”, also increases animosity towards those you regard as “others”

Love, obsession, jealousy and envy are all tied together, just different expressions of the same feeling. Oxytocin will get you all these.

1. When you think about it that way.

The odds that you die tomorrow is wayyy higher than winning on that lottery ticket.

I would have to agree with most of these replies, how about you?

Tell us why or why not in the comments!