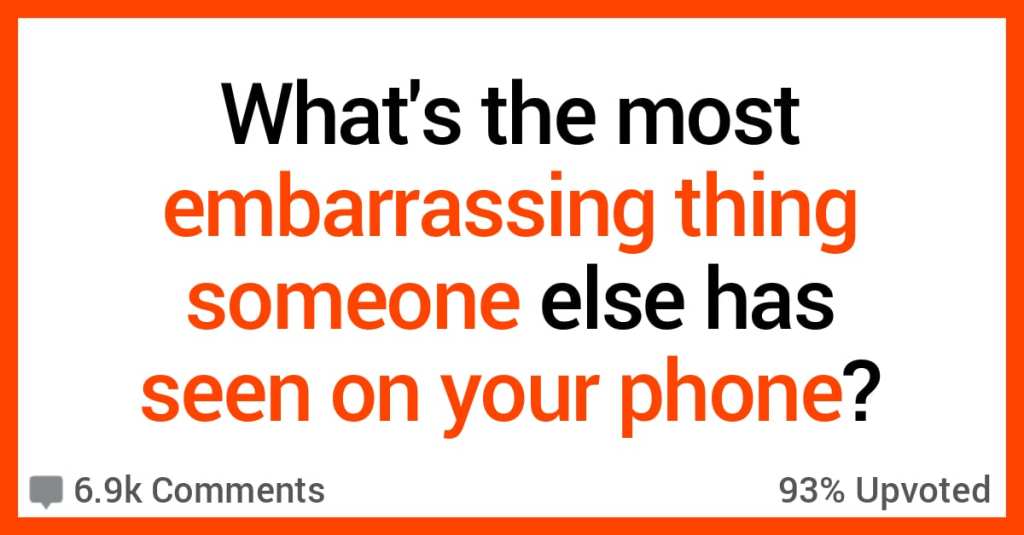 The obvious solution to this problem is to set your messages not to display content if your phone is locked, but I guess if someone else was actually using your phone, that might not always work.

If there was a foolproof solution, these 16 people would surely be all ears after these cringey moments of others seeing notifications on their phones that honestly, all parties probably wish they hadn’t.

My boyfriend and I send each other shit randomly during the day like “FedEx me that pecker” or “flap them t**s my way”.

15. It may not be what it seems, but she’s not going to believe that.

My mum was looking up stuff on my prescription app on my phone when a message came in from a group chat I’m on, a group chat named pornographic material.

14. This is actually kind of sweet.

I remember when i was like 13 my mom was showing me something on her phone. My dad was away on a business trip and texted her. I said oh dad texted you. She’s like whats it say?

And i read it (in my head thank god) and it said something like “i cant wait to make love to you again” 13 year old me just turned red and handed back the phone.

My friend made this fake account on Twitter and followed me exactly at the time my teacher had taken my phone away.

The notification read @analfister6969 has followed you.

Sorry for you having to see that, mother

I had this roommate my sophomore year of college and we had a very weird, close personal relationship. I was in my Spanish prof’s office hours and she was waiting for me at the cafeteria to get lunch together. Just before going in I texted her and asked her to get me some fries, and then I turned off my phone. I was showing my prof my paper on my laptop screen, very much forgetting that I had iMessage set up on my laptop.

I’ll never forget the look on his face when a notification from my roommate came in with her (jokingly) saying “I’ll get you fries but only if you sensually feed them to me while you call me daddy”. Suffice it to say, that was my last time visiting his office hours!

Imagine my conservative 15 yr old little brother’s face when my bf texted “I’ll destroy your p**sy” while we were watching some stupid goat on youtube.

My friend sent a poop pic while my then girlfriend was checking the weather for us one morning.

Not exactly a bad message but I leant my jacket to my crush and it had my phone in it’s pocket. Someone sent me a message so she got it out to give to me but unfortunately she had sent me a message before that and saw that her name was marked with a heart.

Awkward night after that.

Right as my GF held the phone…

Story apps can give really interesting ones.

My favorite that popped up while my boyfriend was holding my phone was something like, “Mike misses you! Come back and play!” Or something like that.

Of course all he did was pull the drop down menu down to see the full notification and laugh.

He teased me about it for hours.

I was showing my grandma some pictures. She chuckled a bit and quickly handed me back my phone. I looked at it and saw that my boyfriend (now husband) had texted me saying “I hate it when I’m pooping and my dick touches the water. Big d*%k problems.”

We laughed about it, but my husband is still horrified by the thought of my grandma knowing about his “big dick problems.”

Not really my phone but I had text notifications on my computer, was working with a vendor and sharing my screen, my SO picked that time to send me a text that said “that was the most amazing s^x we’ve ever had last night!”.

I silenced the notification as fast as I could but the vendor went quiet for half a minute and then said “good job!”, so got out of that awkward zone pretty well. I never shared my screen with notifications active ever again.

When I was in high school, my friends and I had the habit of giving each other funny contact names on our phones based on jokes we came up with. To this day my high school friend’s contact names are things such as River B*%ch, Jeff the Sl*t, Baby America, Sugar Mama, etc.

When we were juniors, a girl who was obsessed with my friend led to his contact name becoming “Booty Lord” with some rather suggestive emojis following it. Everything was fine and dandy, until a few months later when I had forgotten about it.

I was applying for a leadership position in a club I was a member of and was required to get two letters of recommendation. For the second letter I asked one of my teachers, who happened to be a very conservative man in his late 70’s, if he could write one for me. Being the lazy son of a bitch that he was, he told me to write the letter myself saying all the things I wanted him to say, and he’d sign it.

After I finished typing up the letter, I handed him my phone to let him read and approve it before I printed it out. About 45 seconds after I gave him my phone, he (very loudly and incredulously) said “Booty Lord??????” and gave me a horrified look and shoved the phone back into my hands.

That was hard to explain.

Not my phone, but a Hangouts notification that popped up on the screen while my new boss was standing behind me to train me on a new program.

The message from my husband asked “how’s the Pooper?”

I was so focused on the task that she saw and read it before I did and collapsed to the floor in hysterical laughter. I read it and immediately lost it too.

In tears from laughing we were frantically talking over each other – her trying to apologize for the unprofessional reaction, and me trying to explain that Pooper was our dog’s nickname because he was getting over a bout of diarrhea!

The rest of the office was so confused!

Has this ever happened to you? Share the story in the comments!