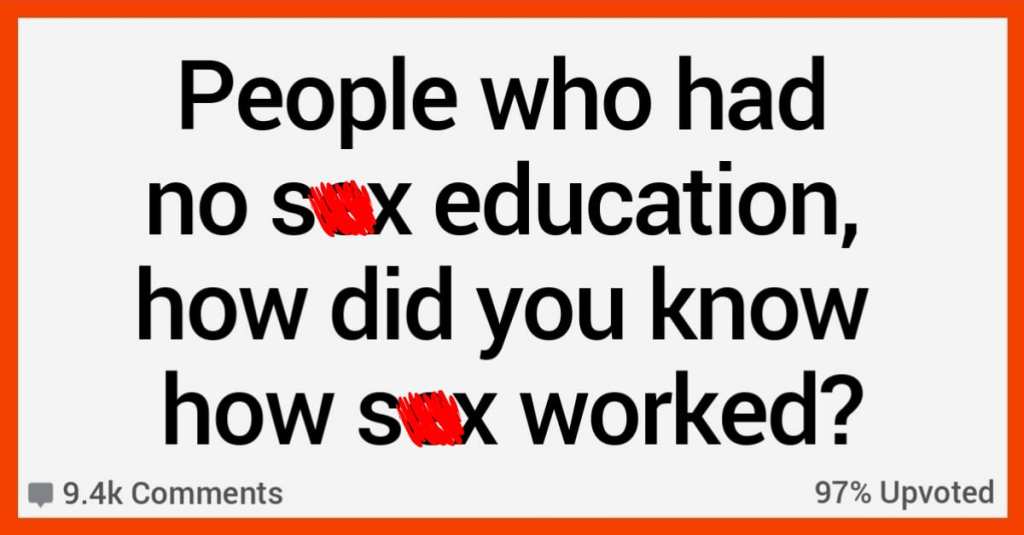 If you live in America, there’s a good chance that your s*x education was lacking. A few lectures in middle school, maybe an awkward talk from your parents, and everyone assumed you were good to go.

These 16 people, though, had absolutely zero clue what was going to happen the first time they were intimate with another human being, and they’re willing to dish on just how they figured it all out.

Still better than a couple my dad once counseled.

They didn’t understand why they hadn’t conceived after trying for a year.

Turns out there was a slight language barrier – they didn’t understand that “sleep together” was a euphemism.

They were literally just lying next to each other every night.

I was M 17, she was F 18. We had the day set. I drove around for like a week trying to find a “spot”. I found one inside a wilderness preserve. The day comes, it was late, dark outside. We were in a tiny truck, the front on of the truck, not the bed. I knew it had to be hard, and where it went, and that was the end of my knowledge. So, she had a condom, I put it on, and I put it in. And.. I… didn’t… move… I just put it in and laid there perfectly still. Needless to say, it didn’t take long for things to go south. Now, I had masturbated plenty in my life, but I honestly thought that had nothing to do with the movements required for actual s*x. So, it went soft, I was embarrassed, and I got out of the truck. The condom was no longer really useful. She told me to throw it out and try again. I was worried, but she reassured me that it would be fine. She ended up telling me a lot of lies over the next few years. (Actually, it was fine, but that was still dumb on our part). Anyway, I manually got hard, trying to hide what I was doing from her.

This time, I did the “masturbate” movements while I was inside her, even it it made me seem like a weirdo by moving during s*x, just trying to make something happen. Well, it happened, and I was relieved. Now, to get out of there. I had pulled into an area of the woods where there was a small pull in. When I reversed out, I reversed into a ditch. Not a large ditch, but definitely stuck in the mud now. No amount of forward or reverse would get us out. We had no phones, this was just before cell phones became common. So, we began a 1-mile walk through this wilderness preserve at night. Talk about being scared. We came across a house, a random house with a big dog. I wanted to skip that house, but it was the only one for another mile. So, we went to the door, knocked, and told the suspicious home owner we were stuck and asked to use their phone. I had a friend, actually more of an acquaintance, with a truck. I had to guess at his dad’s name to look them up in the phone book. I got a hold of him, and then we waited with these strangers for 30 minutes or more. He shows up, pulls my truck out, and charges me for gas money.

I get home way past curfew, I’m grounded from seeing her anymore. Of course, that doesn’t stop me, I was a man as of that night. Albeit an awkward man.

I went on later to marry that girl.

14. It’s quite the realization.

I grew up super duper religious.

My mom didn’t even really explain what my period was. I went to school and they provided information like s*x ed and period education, but I never really got it.

From the diagrams, I never figured a penis could/would get hard. So for YEARS I honestly though that both people would lie on their backs and kinda jenga their genitals together yoga style.

Turns out if you do it right, its both

So, in a panic, I decide to get the scissors and just snip off this excess skin. Had them primed and ready to slice my banjo string when I get a knock at the door. My gf had inadvertently saved me from savagely mutilating my own genitals.

12. There’s a certain danger in that.

We learned in biology how reproductive organs work but they didn’t mention s*x.

They just spoke about each individually.

And of course on tv they never show them actually having s*x so I thought people just viciously tore their clothes off and then lay in bed naked.

10. I think that’s what the world wants you to think is the “standard.”

I grew thinking all humans had penises.

9. I don’t think it would have taken long to figure out that wouldn’t work.

8. I’m not sure this is the right area to self-teach in.

Didn’t receive any proper s*x ed classes at school or any talks from my parents.

I did research on the female vagina.

Mainly just studied the diagrams and learned how everything worked.

So you can say I self taught myself.

My first time was still pretty bad, but it could’ve been MUCH worse.

7. This is a whole lot of information.

I was very sheltered, like absolutely no movies with s*x and even kissing scenes had to be skipped/eyes averted. Always taught not to kiss until marriage. S*x was taboo, and to this day I still have some irrational shame talking openly about it. The only people I socialized with at all were like me, extremely sheltered and old fashioned (small town, small church, small school). Had “s*x ed”, but it never actually taught us about s*x, just basic anatomy – I think it was 20 minutes once a year, only in grade 5 and 6.

First time I got a boner, maybe 13 idk but I thought the head of my d*ck was gonna fall off as soon as the foreskin pulled back behind that edge and it freaked me out. I sat on the toilet for a good while just holding the foreskin forward until it went away on its own.

First time I masturbated I was I think 17. My d*ck was disgusting. Because I had never done it before and never really played with my d*ck at all, and nobody told me anything about cleaning it, there was years of d*ck cheese (aka dead skin and all that stuff) that built up into a several mm thick layer under my foreskin. I don’t remember a smell, but hard to imagine how there wasn’t one.

One night I had a boner randomly in bed and I got super annoyed and just looked at it, and a piece of this d*ck cheese was sticking out from the edge of the foreskin and starting to come off… so I just carefully (holy s**t it was sensitive) pealed it off. Then some more, then some more…it felt amazing. Like pealing dried glue off your finger nails had s*x with, well, having s*x and this was its baby. I eventually ran out of this nasty f**king s**t to clean off but by then I realized that moving the foreskin back and forth on my d*ck felt amazing…so I kept doing it. Then I sped up. Then I came. Then I knew. I had never cum before then except from wet dreams, and I 100% was convinced I was sterile. So seeing that white stuff come out was almost better than the orgasm itself.

6. It’s important to have an understanding (and willing) partner.

When I was 16, I was lucky enough to have a girlfriend as inexperienced as I was.

All we knew was that we wanted to do naked, s*xy stuff together.

It took a few nights, but we figured it out.

5. It’s an awkward moment when you realize your parents do it.

A slightly unrelated story about my friend.

I was a year older than her, and told her everything because I had discovered it just discovered it, at 13. She was stunned, and in complete denial, and was about to go and tell my mom that I’d told her about s*x.

She kept saying “this is disgusting, my parents could never do that, you’re lying, I’m going to throw up”.

She was literally shaking, and took hours of convincing to get her to not tell my mom.

4. WHERE DID THEY HEAR THIS.

As a parent, I had to explain to my then 6 and 8 year old that no, s*x isn’t “when a boy sticks his penis in a girl’s butthole.”

They had a friend who told them that’s what s*x was and I just imagined the poor children who never learn any different going into s*x for the first time thinking it goes in the booty.

We will explain it all in more detail at some point when they’re a little older but I just think they needed to know they weren’t getting accurate information.

3. There’s always that one buddy at school.

My buddy told me all about it.

The school or my father never mentioned it besides telling me not to have “s*x” with my girlfriend years later.

2. You would think, with all of those kids, they’d be more open to discussing how they plan to populate the earth.

I was homeschooled, raised with cattle, and fairly conservative Mormon parents who did not acknowledge s*x.

Having participated in several artificial insemination procedures by the age of 10, I thought for the longest time that pregnancy happened when an illiterate cowboy brought a teeny baby cow and shoved it up the ass of a momma cow, or when one got married you requested a baby and a cowboy would show up at your door to shove it on up there.

Luckily, we got the internet in 1998, and I finally learned that a woman got pregnant when a man with a mustache came on her face.

1. Just watch how the other animals do it!

I remember my little sister asking why the bull kept trying to jump over the cows.

I mean, it’s not all that weird. Hundreds of years ago, people just…figured it out. We’re just one more animal on earth, after all!

If you fall into the “no s*x ed” category, we’d love to hear your story in the comments!