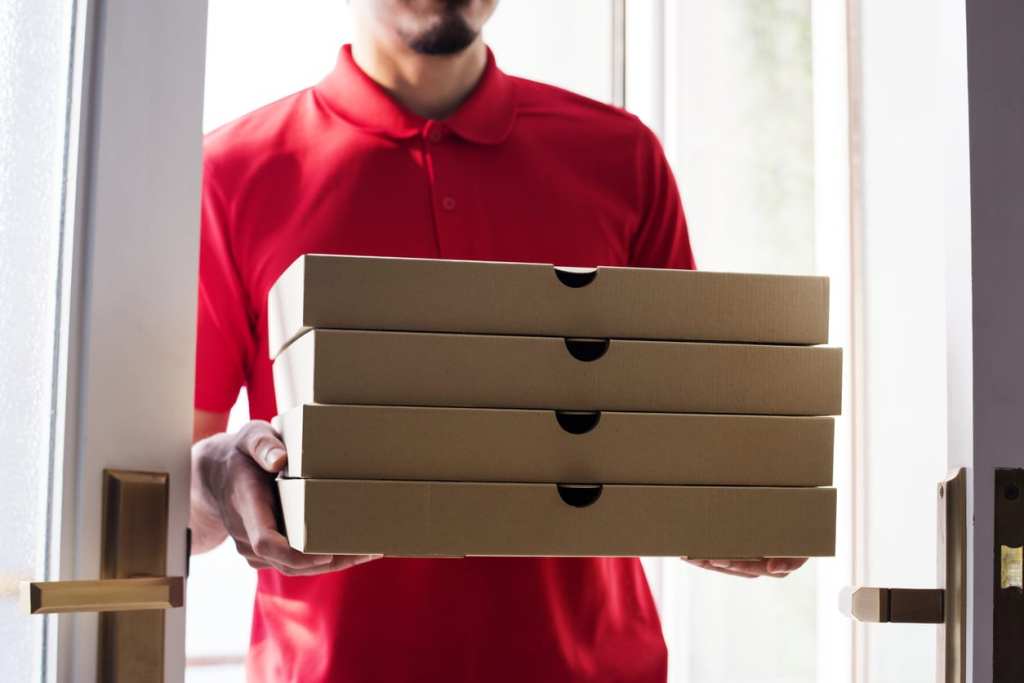 Food delivery can be a really dull and boring job. But every once in a while, something truly weird happens, and it makes for a story that keeps getting told for years to come.

After all, when you deal with strangers all day, you’re bound to come across some weird ones!

Redditors who have worked as pizza deliverymen shared the strangest things they’ve ever seen while on the job. Some are funny, some are scary, and some are surprisingly sweet.

1. He passed out three times.

“Was delivering to a hotel, had a guy pass out on me 3 separate times in a 10 minute encounter.

Apparently he was narcoleptic, but it still scared the crap out of me.”

2. He made me leave the pizza on a bench.

“Customer paid with a card and he had instructions to leave the pizza on a bench in a public area. Drop it off and quickly leave the area. I left but pulled on a side street where I could see the bench. I wait probably close to 5 minutes and then I see a man bust out of a dilapidated building I thought was empty. He runs up and grabs the pizza, he spins a whole 360 degrees and he is glancing in every direction as if he was afraid he was being watched.

Then he hurries back to the place and when he gets to the door he sees me and his eyes get huge and wide, paranoid and fearful. He slammed the door shut.

I just think he was tweaking or something wouldn’t be out of the ordinary around here.”

3. They ordered the same thing from two apps.

“I deliver for doordash and grubhub, sometimes pizzas. One time I picked up an order from each app, same exact order, from the same restaurant, both named James, to the same hotel.

When I knocked on the door two guys were there and asked me which was I, Doordash or Grubhub. I told them I was both and have both orders. They started to laugh really hard. When I asked what was so funny, they told me they had a bet on which one would come first. They thought it was going to be 2 different drivers and never thought one person would be using both apps. I laughed too and asked them which one was James.

They told me they are both named James. I still wonder what other funny things those two guys try come up with.”

4. Someone was bound and blindfolded.

“I delivered to a hotel in the middle of a local golf course. Called the number to let them know I was there and was told to come on up. Get to the room and when the guy answered, there was a large group of guys, all in golf attire, surrounding a single guy in a chair. He was bound & blindfolded. The one that answered didn’t even bat an eye, just asked how much and tipped me $30 bucks. Warily I took the money and walked away, but before the door was fully closed, I heard one on the guys ask “I wonder if he knows this is a..”

Before I even left the parking lot, the guy that answered the door called me to say that the bound guy was his brother and he was bound & blindfolded because it’s his bachelor party and the stripper was waiting to come out. I just showed up way earlier than they thought I would.”

5. He pulled his wallet from his… ass?

“Some dude opened the apartment door completely naked, I was stunned but what came after that made me ask myself is he some kind of f**king magician.

He put a hand behind his back and pulled a wallet.

Only reasonable explanation I could give myself was that he tucked the wallet between his butt cheeks.”

“I was delivering a pizza to this house in a pretty rough neighborhood.

These 3 cholos answered the door and when the one guy stepped back to get the money I noticed huge amounts of money, and so much meth and enough weed to kill Snoop Dogg and around 20 guns. I was so scared. He gave me a tip of 20 dollars cash and told me not to tell anyone.

“Just simply coming up and there were 3 guys in underwear waiting for me.

Handing the pizza’s over and more just start coming out in underwear and these were also wearing cowboy hats and Native headdresses, some kind of Bro Halloween party or something.

Got to grab my tip out of the dudes bra. It was funny as hell but when I left the building I had to process for a moment what the hell happened.”

When i got to the house he wasn’t there so i called him out.

He told me he was in the bathroom taking a s**t and i had to wait 18ish minutes to get my pay.”

“I had two teenage girls open the door in their underwear, as a joke I guess.

They were probably 16 or something.

They think it’s funny but I had to report it to my manager and hope nothing came of it.

“Had someone answer the door once with a snake on his shoulders.

Not like a milk snake or a garter but a ball python.

As he closed the door I heard him say to someone that I hadn’t reacted at all lol.

10. Mark was having a great night.

“I once delivered a pizza late at night, the person who took the call told me that the person who ordered (lets call him Mark) was an old man and may take a while to get to the door.

I get to the house and all the lights are off, no car in the driveway. I ring the doorbell, no answer, I knock on the door, no answer, I call the person’s phone, no answer, call again, still nothing. At this point I had waited for about 15 mins for this person and was walking back to my car to leave, when I hear the front door open, so I go back. Again, there aren’t any lights on so I can only see the head of a young woman peek from behind the door, and she refuses to open it all the way, even to take the pizza. I then hear another woman behind her saying “who cares if he sees, open the door”, so she opens it a little more to sign the receipt. She couldn’t see so I offer to shine my phone’s flashlight so she can sign the receipt. I then realize that both of these women are naked. Me being the good employee I was averted my eyes as she signed the receipt and I start walking back to my car.

As I was walking away, one of the women yells to me “Have a good night, you know Mark is!” and I burst into laughter as I had totally forgot that this was the house of an elderly man.”

“I delivered a pizza to a young girl who was home alone and when she opened the door her dog immediately ran away. I handed her the pizza, got in my car, found the dog and returned it. She left me no tip so I was feeling kind of salty about it on the way back to the restaurant.

A few hours later her Mother called the store asking to speak to me. She thanked me and explained they had left tip money but their daughter was so upset about the dog she forgot to give it to me.

I worked at this pizza place for two more years through college and they would get two large pepperoni pizzas and request me to deliver it every week after that. They always tipped me at least $25.”

“Back in college when I use to deliver pizzas. I delivered to the local county Jail.

An officer was taking someone to jail. The guy going to jail still with his hands cuffed behind his back got away from the officer and took off as I was walking in and ran into me. I’m pretty sure this guy was tripping on Meth. The officer caught up to both of us on the ground, and were able to subdue him.

I was covered Pizza sauce and the officers on shift took the pizza, paid and each gave me $20.

I told my manager and we remade the order for the officers and I redelivered the order. The police were grateful and I was given another tip.

13. A pimp tried to buy another pimp’s pizza.

“I was delivering a pizza to a high rise once on a Saturday night. Got in the elevator and there was a guy dressed like a pimp who tried to buy my pizza from me that I was about to deliver.

Here’s where things get totally f**ked up… when I get to the door of the guy I am delivering it to, he opens the door and is dressed like a pimp also, like, huge colorful jacket and he grabs the pizza and gives me a $100 bill and shuts the door (pizza was about $35, so a $65 tip).”

“Delivered a pizza to the backdoor of a funeral home.

The aprons were glistening with some fluid or other.

Fortunately the guy paying took off his gloves before pulling out his wallet and paying.

I was only 18 at the time, kinda freaked me out.

To the point that today, 42 years later, I still remember it.

15. He wore his girlfriend’s skirt.

“There was this house where a young couple had ordered pizza. I reached quite early and probably disturbed their s*x session.

The drunk dude had no idea that he had put on his girl’s skirt. Not strange, but very difficult not to laugh at.”

“This guy would order boneless chicken wings, a 2 litre of diet Pepsi and the cinnamon rolls every Friday.

I can’t remember the name on the order (I think it was Michelle). Well a woman never answered the door and this guy gave us all the hibee jibees.

One day I said oh why is Michelle always on the order? Michelle was his cat.

Have any stories like this? Find any of these stories particularly interesting?