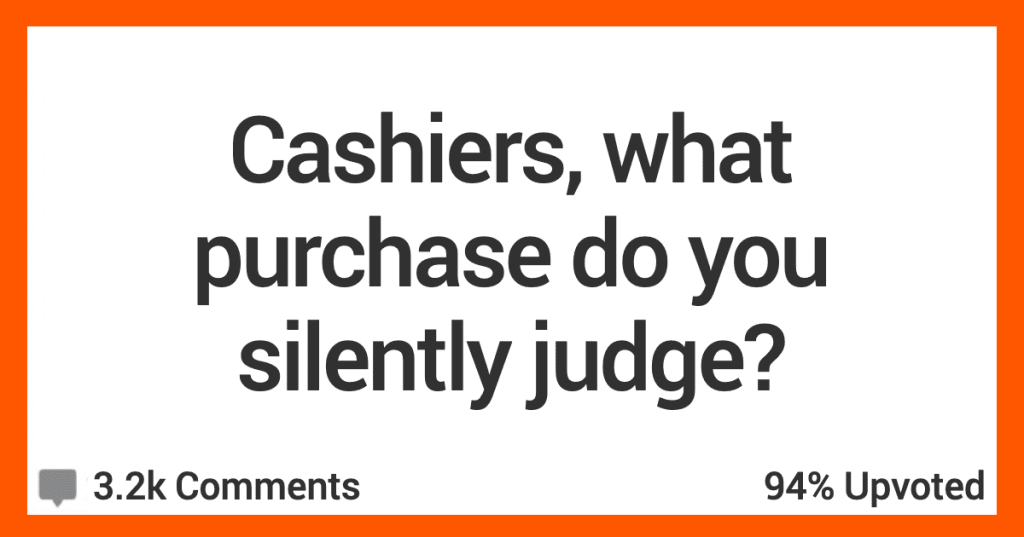 16 Purchases Your Cashier Is Silently Judging

Once a person does a job for a certain length of time, I would venture a guess that nothing really surprises them anymore – and if you work with the public, you also learn that nothing good comes from judging strangers 99% of the time.

That said, sometimes you just can’t help it – and these 16 cashiers say yes, there are certain times when they’re for sure side-eyeing your purchase.

When I was 20 and moving in to our first apartment with my now ex- wife, we had a pregnancy “scare” (it wasn’t really a scare, we were trying at the time, but I don’t know the term you’d use.) So I went to Target to buy a pregnancy test.

We also, happened to need hangers, and I prefer wire ones over those cheap plastic ones. So I went through that checkout lane with a pregnancy test and a bunch of wire hangers. The cashier was shooting me daggers and I had no clue why.

It wasn’t until I told my wife, confused, about it and she started dying laughing that I made the realization of what this cashier must have thought.

I have to bag customers’ items where I work so sometimes I lightly lift my arm up and down to see how much something weighs and decide what bag to put it in. I wasn’t paying much attention to whatever was in the bottle because I was swiping so fast, it was some kind of jelly and I kinda assumed aloe vera

After a few lifts I noticed the couples uncomfortable face. I look down… and I was shaking their lube. I just put it in the bag immediately and moved on.

Not a cashier, but this is a fun story. Was in a high end liquor store in LA a few years ago. Guy walks in, goes straight to the cashier and asks for help. He said his boss is a famous rock star, and that he was sent to buy a number of bottles of the best whiskey and scotch they had in the store, but he knows nothing about whisky and scotch. The guy helping him suggests a few bottles in the $50 range, and he keeps saying no. Said his boss would be pissed if he bought stuff that cheap. The cashier gets excited, and goes over to the locked rack…The guy says this was the right stuff, simply because it was expensive. He walks out with at least 10 bottles of booze none of which were less than $500 each. I watch him jam every single bottle into a back pack, and jump on a really nice motorcycle, and speed off.

My judgement of this guy is that he was not likely lying about working for a famous rock star.

I worked for UPS loading package cars while I was in college.

One morning, a pad pack envelope came down the belt. It was open and empty. The loader handed it to the belt supervisor who opened the packing slip. This was the procedure we followed. If it was somewhere in the building, we’d try to match it up.

Of course, when the drivers arrived, they all heard the story, including the driver whose package car it was in. When he got to it, he asked his loader “Where is it?”

So maybe, just maybe, your package delivery person DOES know you’re getting a sex toy. Maybe a LOT of people know…

When old men bought and ask about sex toys and sex items. I worked in a pharmacy (shoppers) I had people ask lots of questions and normal stuff about condoms and lube etc, I just tried to help as much as I could, but once this old man was getting his stuff and kept commenting on my looks ( F18 at the time) and kept calling me “sunshine.”

He also said my finger nails were nice and short and that means “no scratching”. Fucking weirdo, after I realized he wasn’t really asking for help much less being a creep, I just left and told my co worker to deal with him and left. Ya I judged that man, every time I saw him I did.

I once had a guy in his 50s ask me if it was ok to buy his wife a box of hair dye for Mother’s Day.

I told him it probably wasn’t a good idea but he said “Oh well” and bought it anyway. So, yeah, I judged him.

10. We’re all judging those people.

When I was a cashier on the Express lane, I would silently judge the people that told me to wait while scanning their items to “grab a few more things”.

Normal lane with a giant cart and only missing one thing is relatively okay, but the express lane? Judgement.

I worked at justice the clothing store for girls a few years back. A tired dad walked in and told his daughter’s buy everything you need. The total was in the thousands! He looked defeated and we made polite conversation. He ended up telling me that he has to go back to work on the rigs after this or something to that effect.

Apparently his ex the girls mother sold all their clothes and they had nothing. What a sweet dad in a bad circumstance. Being a mom myself I really wanted to tell him that he could probably save thousands of dollars by not shopping where one shirt is like 20 bucks a peice but that would’ve gotten me in trouble so I rang him up and prayed that the girls would get to keep their clothes this time.

Btw they had no clue what they were doing if I knew what they were doing other than piling my register high with random clothes I would’ve told them they probably needed to focus on outfits and undergarments and try to be a fill in mother figure they apparently didn’t have. They had pants shirts jackets, backpacks, necklaces, just pretty much half the store on the register lol I felt so bad for the dad.

When I was a teenager a friend and I decided to try and shoot a movie gunfight and wanted to make our own squibs. We read in a magazine that they used condoms filled with fake blood and blew them up with a small explosive charge. We had firecrackers, so off we went to buy condoms.

7. Even if they’re not judging your purchases…

As a cashier at a clothing department store, I don’t have a reason to judge anything they buy. But I do judge the ones who force me to answer stupid questions. I’m amazed of how many people will literally start yelling at workers because we didn’t have the exact shorts he wanted.

One time, this guy asked me repeatedly if I had his size in the cargo pants he wanted. And loudly too, “no but really, do you have it!?” like over and over and over. His family had to tell him to shut up several times. Like, I’m not holding back from giving you the size, we just don’t have it.

I hate when people come up to me and go, “look i really like this but it’s like $85, so like… what can you do for me here?” Excuse me, do I work for you now? It’s a nike item, I can’t just give you discounts because you’re bitter about the price.

6. Concerning is one word for it.

Anything of a large amount. I once saw a person buy like 15 boxes of redbull. The most concerning thing is that they were like 12.

I don’t judge you for your items: I judge you for how much of a pain in the ass you make my life. Sometimes not at all, sometimes it’s the worst part of my day.

Fuel that they don’t pump right away. It times out after 8 minutes and refunds back to the card.

I don’t know why people pay, then f**k around for 20 minutes, then yell at me for their pump not working.

Well I don’t know about “judgement”, as I have my own vices, as most people do, but…

Lottery tickets. I get that gambling addiction is a problem and why, but unlike drinking or other drugs, it seems like so little reward for so much investment. People pissing away in minutes what it would take me all week to earn, right in front of my eyes, not even waiting to leave the store to scratch off a whole stack. Again, not really judgement, I don’t know these people or their lives, but certainly the most upsetting on a certain level I feel.

woman on a scooter with grey skin and on oxygen buying two huge jugs of wine and a carton of cigs.

on one hand, wtf, you trying to die soon? on the other, if I was a little old lady shut in all day, I’d drink and smoke a lot too.

I totally judge. Mostly cause I got things to do and it’s usually some little old lady or dude in his mid to late 50s buying $300 worth of scratch off tickets and they wanna pick certain ones then stand at the counter and scratch them off. DUDE! Move! I road rage in gas stations lol.

Y’all, I think working with the public 24/7 would just destroy my faith in humanity beyond repair.

If you’re a cashier, drop your own thoughts on this matter down in the comments!