These 16 Vintage Medical Photos Are Both Creepy and Fascinating

I am definitely not one to romanticize the past.

I have no desire to exist during any time in history other than right now.

I mean, I might be into a quick trip to the future, but you can keep the past.

For example: as much as I hate waiting at hospitals and dealing with the insurance company these days, I’d take that over the following 16 examples of vintage medicine any day: 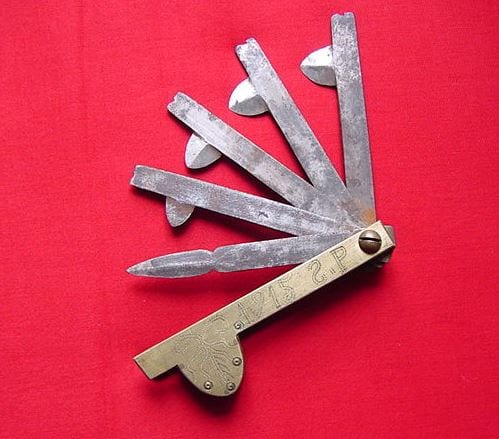 This is an Italian fleam, a tool used for bloodletting. It has four iron blades and is engraved with both the initials “S.P.” and the year “1915.”

Bloodletting is still used today in certain rare circumstances, but back in the day, it was the cure-all for just about everything.

A doctor would use a lance or something sharp like the fleam above to drain a vein or two into a jar, the idea being that “bad blood” was the source of the ill. 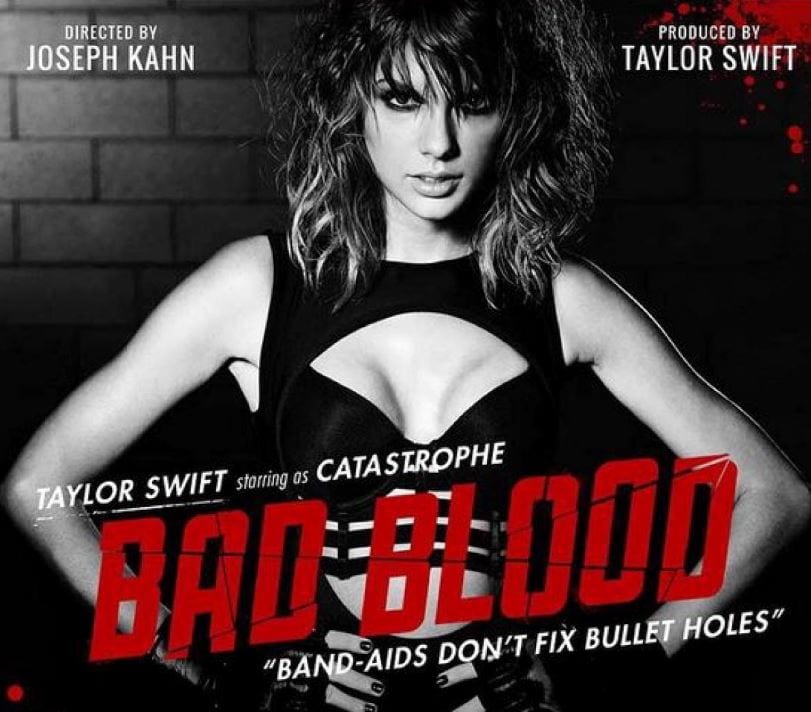 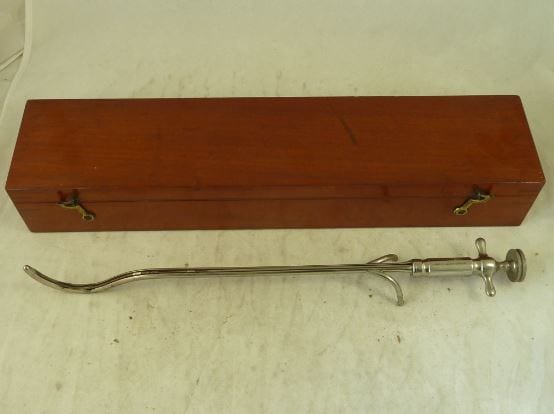 Dated 1910, this was designed to go into your pee-hole, stretch it out a bit, and perhaps allow your urinary tract a bit more room to breathe. 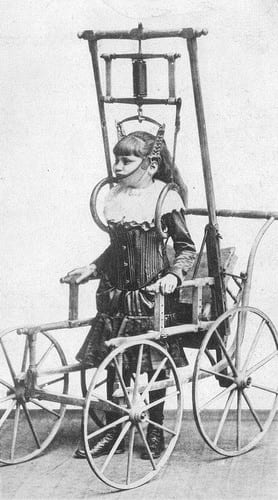 These wacky devices were the best doctors could do in the Victorian era to deal with things like Scoliosis, which should make the next picture look humane. 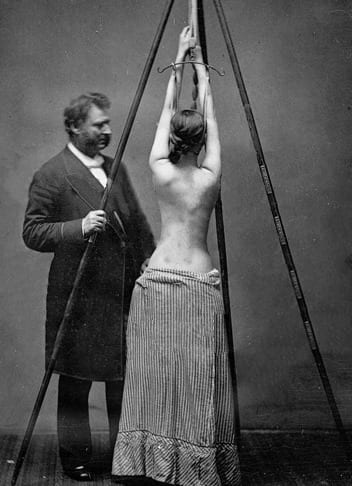 Sayre pioneered the method of suspending a patient like you see in the above picture before wrapping them in plaster of Paris to correct irregular spines.

And, IMO, that’s way better than having to walk around with the prior contraption.

These booths were used to treat Rickets during the winter months.

“What’s up with those stupid things on your face, dude?” 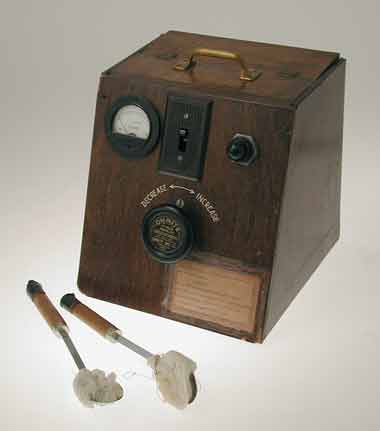 Claude Beck was a heart surgery pioneer and the first person to successfully use paddles to revive a patient in 1947. The paddles pictured above were custom made of silver but still look like they just up-cycled some spoons.

But, I can’t find any evidence that anybody yelled, “clear!”

That must have started later…

This is from Walter Reed Medical Center, and the best I can figure, it was some kind of “physiotherapy” for the mentally ill. 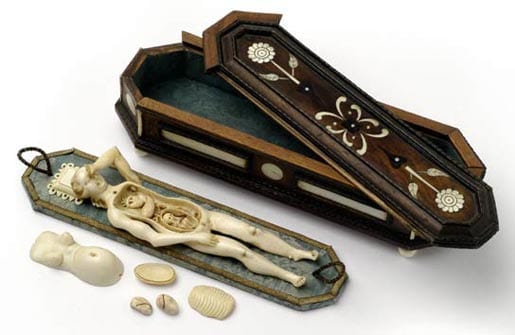 This teaching model of a pregnant woman would have been used in place of an actual human, and it even includes a removable fetus. 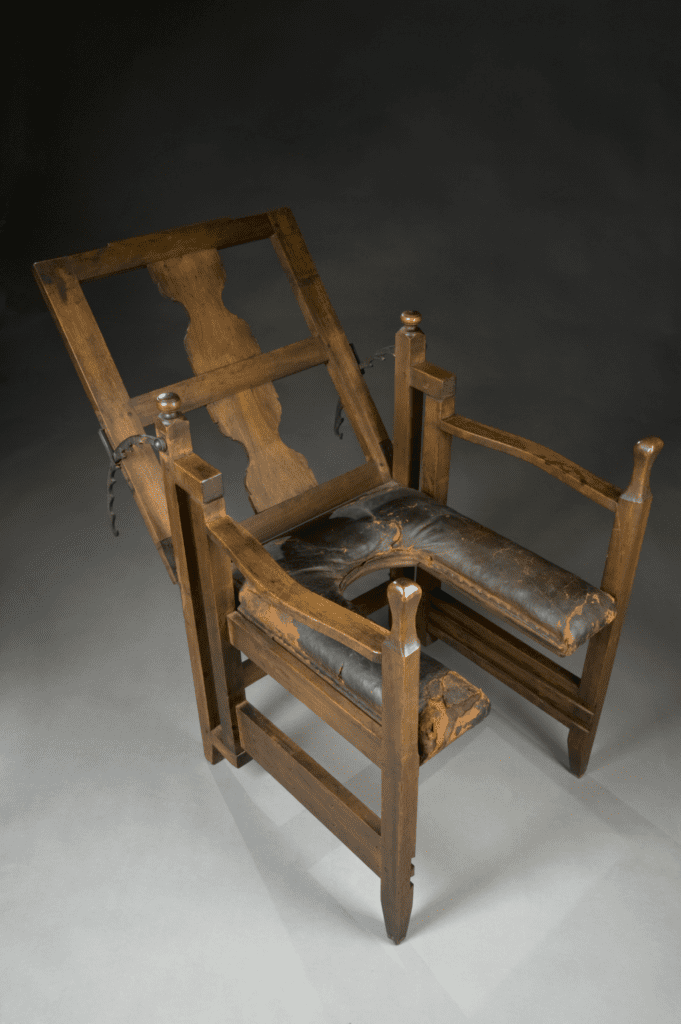 Foot rests would have gone into the slots below the seat and would have made this look a bit like a creepy-steampunk version of the stirrups still used today.

Eben Byers was a steel magnate who started downing three bottles a day in 1927 to improve his “vitality” but had stopped by 1930, when his teeth fell out.

He died in 1932, and according to a report from the Federal Trade Commission:

…his whole upper jaw, excepting two front teeth, and most of his lower jaw had been removed. All the remaining bone tissue of his body was slowly disintegrating, and holes were actually forming in his skull. 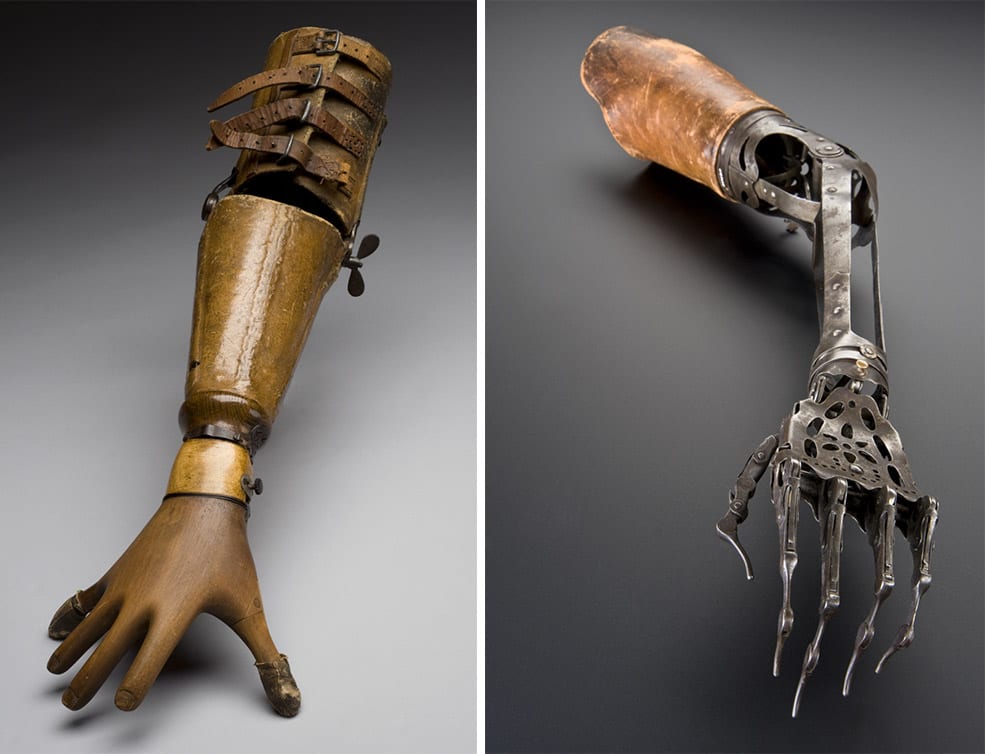 The arm on the left was designed for a concert pianist who played London’s Royal Albert Hall in 1906. Note the octave finger-spread, and the padded fingers.

The Victorian era limb on the right probably still looks just like it was meant to, despite the skeletal feel. The finish and detail are too nice to have been hidden under a false arm and hand. 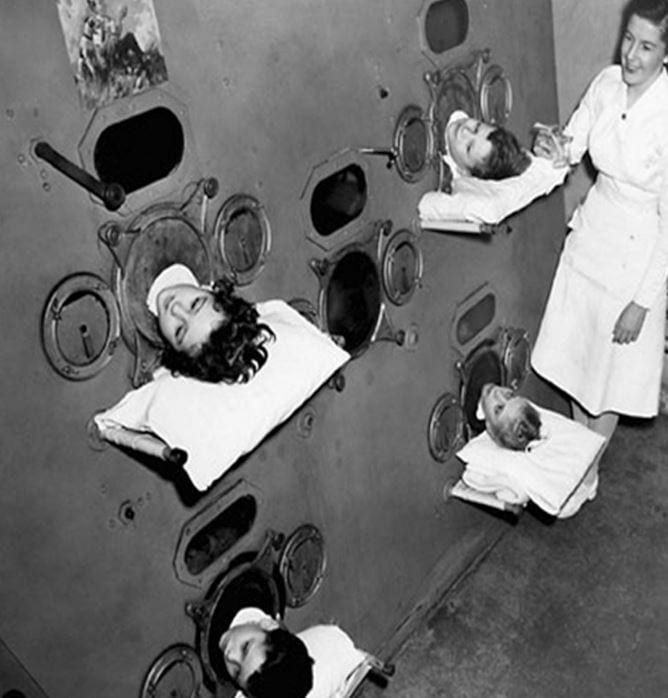 Polio was a real bitch before the vaccine that cured it came along.

At its peak in 1952, the year Jonas Salk first tested the vaccine on himself and his family, nearly 58,000 cases of the disease were reported. 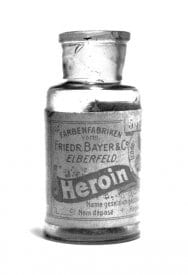 Bayer not only has the f’awesomely horrendous legacy of using Jewish slave labor during the Holocaust, but they first jumped onto the map when they commercialized both aspirin and heroin in the 1890s.

Of course, reports that heroin was a bad idea for curing coughs and pain were coming out as early as 1899, so Bayer had to either prove that heroin was safe, stop making it altogether, or find a new market that didn’t know about the dangers: 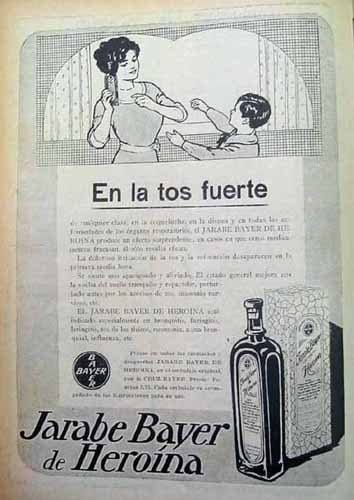 They chose the last option.

You probably guessed that.

That big part roughly translates to:

COCAINE TOOTHACHE DROPS
Instantaneous Cure!
Price 15 Cents.
For sale by all Druggists.
(Registered March 1885.)
Cocaine is the new anaesthetic now used so extensively throughout Europe and this
country by Physicians, Surgeons and Dentists.
This preparation of Toothache Drops contains Cocaine, and its wonderful properties are fully demonstrated by the many recommendations it is daily receiving.
Take no other except Cocaine Toothache Drops.
For sale by all Druggists.
Prepared by the Lloyd Manufacturing Co., 219 Hudson Ave., Albany, N.Y.

Let’s do a bit more bloodletting for the finish: 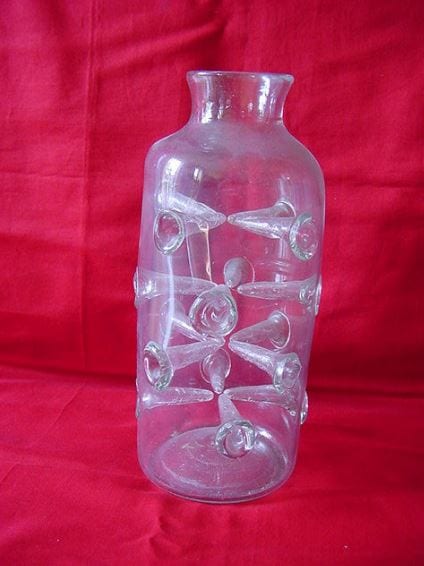 This jar from northern Italy would have held leeches for sucking all of that bad blood out of patients.

The First Woman to Run for President Was Called Lewd, Indecent, a Witch, and ‘Mrs. Satan’… This Is Why

The Sarajevo ’84 Olympic Site Was Abandoned and Torn Apart by War. This Is What It Looks Like Today…