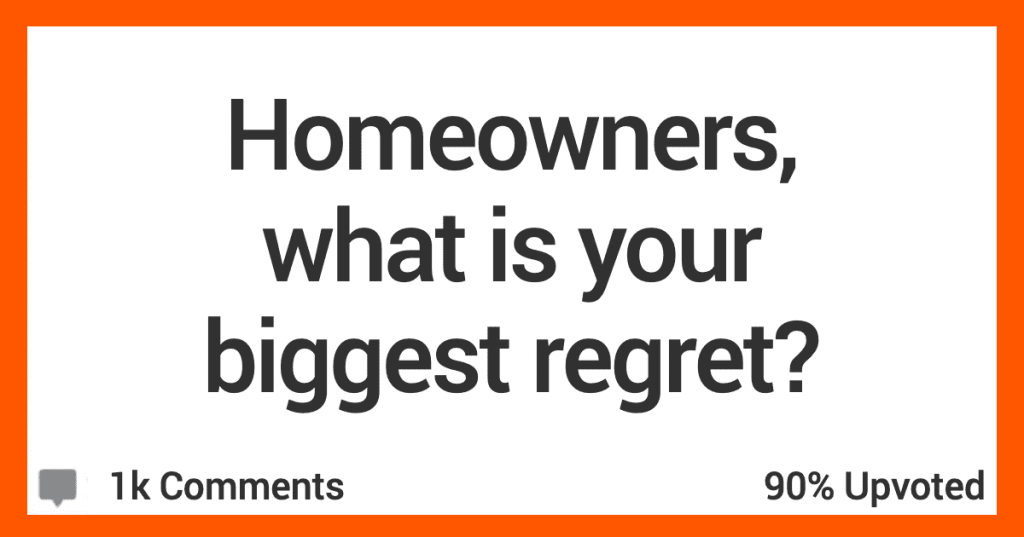 Not as many people aspire to own a home as used to, and for good reason. Prices for absolutely everything have absolutely skyrocketed, and if there’s one thing you can count on when it comes to home ownership, it’s that it’s going to cost a pretty penny sooner or later.

These 17 homeowners learned that the hard way, and here are their biggest regrets (and what they would definitely do different if they could turn back the clock).

“Picking the wrong agent. In 2002–3, I had an old-school agent that couldn’t keep up or understand the new market. Never managed to buy a home despite 50-plus offers before being priced out.

Years later, I used an agent that was a friend. That was also a mistake and tarnished the friendship.”

16. That ish is expensive to fix once it breaks.

“‘Saving’ $200 by not getting a sewer scope or a septic system inspection.

For anybody reading definitely get a sewer scope. Can easily be a $10K fix.”

“Trusting my agent and attorney to understand the contract. Turns out they both missed a last-minute exclusion the sellers snuck in to keep the washer and dryer despite them being listed as included in all previous instances.

Cost us $2K to buy new ones, which wasn’t something I wanted to do immediately after dropping $100K on a down payment, LOL.”

“Account for a lot of unexpected expenses. Our property transfer tax was over $14,000 and needed to be paid for upfront, isn’t included in your down payment, and couldn’t be tied into our mortgage.

It almost sunk us since we scraped together every dollar we had for the down payment. A big oversight on our end of things, I suppose.”

“Realtor here. I have not personally taken part in the following, but I have heard of people who purchase ‘flipped’ houses and are shocked when the updated tax bill comes in.

If the house was assessed at $60K, but now that the depreciation is closer to zero, the tax bill is going to change. And you don’t know what it’s going to be until it arrives.”

12. Your HOA can be tricky to nagivate.

“My first home was a townhouse in a small community with an HOA. I was in love with the idea of it on paper, but was not prepared for the dynamics of the neighborhood or the drama of the HOA.

Selling it was one of the top-five happiest days of my life so far. Research your neighborhood and get several years of the HOA meeting minutes before buying in an HOA.

My current home was a custom build in the country where I could vet the neighbors, and we love everything about it. It’s a new house built to our specs so no surprises going in.

I get that’s not possible for everyone but custom built doesn’t have to equal a small fortune. Definitely worth looking into it once the market isn’t nuts.”

“Not getting a survey. We didn’t want to get a survey because it was an extra £300. But not doing one cost us about £2K in the end because they found issues they could have found post-survey, and the seller would have paid for them.

“We bought a house with a wrap-around deck because it looked amazing! Big mistake. A fresh coat of paint made it so we didn’t feel the need to inspect it closely.

Now, four years later, we have a deteriorating deck that hadn’t been updated in years. It’s a massive safety hazard and it’s going to cost around $50K–$60K to fix.”

9. Look beneath the surface.

“Not asking about a neighbor’s tree root lifting up the concrete on our side of the fence. Inspector and owner said it was fine, but long story short, the roots were extensive and growing right into and under my house and up against the foundation.

It cracked pipes and other minor damage. To fix this would be about $15K, all going well, not to mention what other problems that could be discovered.”

8. Not all towns are built equal.

“Buying in a town I wasn’t familiar with. I hate this town, but I have been stuck here for a decade now because I can’t afford to move to a new town.”

7. Factor in the heating and cooling costs.

“This might sound more minor, but it’s something I’ll definitely think about when buying my next home. I live in a top-floor condo in the Deep South of the US. When I was buying my condo, the fact that it was top floor, vaulted ceilings, west-facing windows didn’t mean much.

But after I bought it, I realized that all leads up to pretty high temperatures in the condo on summer afternoons, and as someone who’s very heat sensitive, made it very uncomfortable those days.

It also drove up my power bill for the summer months.”

“The most expensive mistake I made was giving my husband the home in the divorce. I had done a surrogacy and used the money as a down payment on the house.

During the divorce, I was desperate to get away from my abusive husband as quickly and easily as possible. He wanted the house, and I gave it to him.

He sold it months later, and five years later it’s worth more than twice what I paid for it. Women, know your worth and don’t let men take your assets.”

“Not doing a final walkthrough. I was a first-time homebuyer and didn’t think to ask, since I was present at the home inspection, and my very seasoned agent never offered or arranged it.

Not as much of a horror story as some of the other posts here, but the day I got the keys, I realized the house wasn’t actually fully vacated — clothes in closets, script meds in cabinets, used bar soap in the shower, food in the fridge and freezer, pots and pans in the kitchen, etc.

The selling agent claimed to have ‘cleaned’ the home, but all she did was wipe off counter tops and shop vac the floor. There was nothing clean about it.

Also, the sink was completely falling away from the countertop. I ended up having to replace the whole thing. It was improperly installed from the get go, and the home inspector missed it.

Do a final walkthrough.”

4. So many hidden costs.

“I bought a house as a single woman with a lot of trees. That was 23 years ago, and the trees are getting huge. It’s going to cost me a pretty penny to get rid of the pines. The walnuts can just get trimmed every so many years. Wouldn’t do that again.

Also, before you buy, check on the real estate taxes and school taxes. That can get very expensive too. My high school in town built an indoor pool, and guess who’s paying for this thing? The taxes doubled.”

“We bought our first home at 24. We had just enough for the down payment and for other related costs of buying. My only advice would be DO NOT go with the cheapest home inspector that you can find.

We made that mistake, and we bought a mouse infested-home that wasn’t mentioned once during the inspection, and there were no signs during our viewings.

We of course found this out shortly after moving in when we started pulling our kitchen appliances out to repaint.”

2. Size matters…but maybe not in the way you think.

“I bought a house that was way too big for us. It took so much time to clean, and the cost to heat, maintain, and decorate it was ridiculous.

I sold it after just two years for more than I paid but still lost money on commissions and closing costs. I just closed on a smaller house and couldn’t be happier.”

And finally, “Rushing into buying too soon in life. My husband bought a house in his early 20s with his first wife. Paid minimum allowed deposit so had a very big mortgage, and they had rushed into marriage at 21, so inevitably it all fell apart.

They split up, and she insisted on staying in the house and pressured him to help pay the mortgage (but he was no longer living there). She realized she wanted a different career and went back to university so couldn’t afford her half of the payments either.

The bank sold the house in a mortgagee sale, and she had to move back in with her parents. Moral of the story: Wait until you are mature enough to have most things settled before investing in a home.”

Yeah, take notes from these people and don’t make their mistakes.