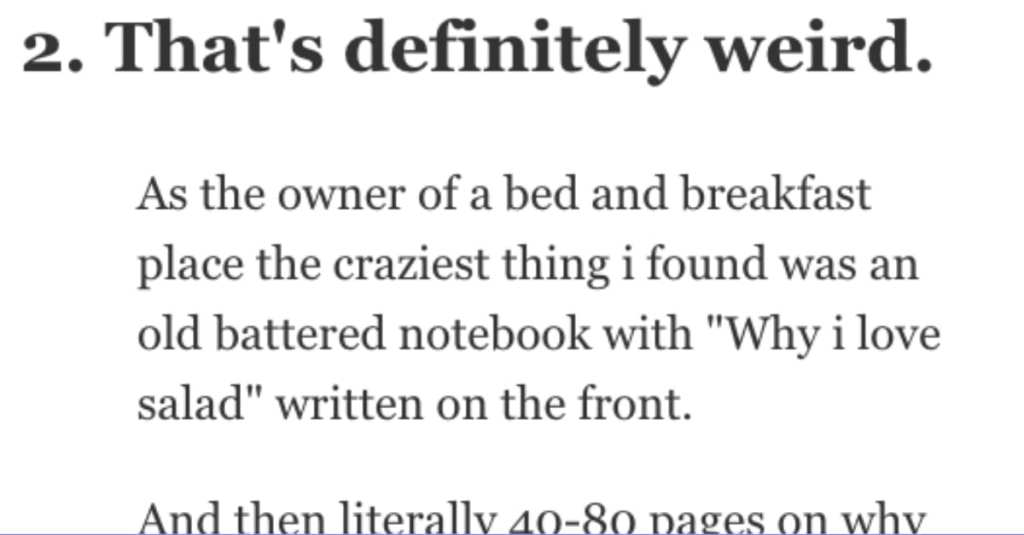 All professions have their secrets, and that goes double for people who work with the public – there is just no shortage of weirdness when part of your job includes working with other human beings.

That goes double, I would think, for people whose job it is to clean up after people.

These 17 stories from hotel workers are for sure proving my point, so please enjoy.

We had a swingers group stay at the hotel for a few nights. They had a rave going on up on the second floor, there were naked people everywhere on the floors, kids were freaked out by it, other guests were complaining.

On top of that, families could hear the couples running from rooms and constantly f*cking. One guy had found out his wife was pregnant with another guys child so he decided to throw the tv out the window.

It was complete chaos and this is a luxury hotel.

16. I’m guessing some kind of substance was involved.

I had a guy who said his microwave didn’t work and I went up to the room and he locked a plate of food in the safe.

I use to install flooring all over the place in various hotels, during one of the routine installations I had to move the bed, as soon as a moved it over.

I saw it, a behemoth of a purple d*ldo.

Absolutely massive, we ended up jokingly chasing the owner of the hotel around for a bit with it with it held in some tongs before we tossed it.

14. You almost have to be impressed.

-checked empty room left with doors wide open, on table was brown bag with over $20000 cash

-tried to wake a guy up to checkout, but he was dead

-basketball team used a toilet for communal poops, no flushing. All weekend. The entire toilet was encased in a mountain of poop. They must have had to stand on the ledge of the sink and lean over. Or straddle one foot on the bathtub and somehow not fall into it. It took devotion. Horrible and wtf at the same time.

I worked at a pretty crappy low budget “3 star” hotel in Canada a year back. On my last month there, a guest came in to request to visit a potential room. Now, I didn’t discover this myself, but I had no choice to afterwards.

The guest comes back after the visit clearly pissed and leaves without saying anything. I go check the room afterwards only to discover a pillow head completely covered in human feces. Someone had wiped their ass. Hell, even the room cleaning staff “didn’t” notice it as it was clearly obviously found behind a chair.

This was supposed to be a clean room ready to rent for the night..

The guest said the mother had died and started looking after the ducklings herself.

We found them in the lodge bathroom.

After that they were kept in someone’s office till the right people came to collect them.

11. I think they should have called the police.

My employer is not a hotel but an online hotel booking website.

We have been contacted by a hotel before who was “complaining” about a guest.

The guests were found unconscious, on the balcony, completely covered in blood, naked, with a knife.

The room was an absolute horror show.

10. I can’t believe they threw her away.

There was this one guy who stayed at least one night every week and he always requested the same room.

We thought he was maybe making drug deals or something so we searched the room after he checked out one day.

Turns out he was hiding a blowup doll under the mattresses. We threw it away and he only came back once after that. I kinda felt bad for him.

9. They got their money’s worth out of that.

So we basically set out to try and get things our guests ask for and these newlyweds wanted a chocolate fountain. Sure, my boss thought, wouldn’t be to much of a hassle right? No, they had to search like hell to find one.

Well after the couples stay they check out and don’t really say much. When the maid is going to clean the room she basically goes in and starts laughing, my boss comes into the room to and there is chocolate f*cking everywhere, you could see her a**cheeks in the bed and on the table and even in the roof.

She didn’t come back.

7. I’m thinking that cleaning was a waste of money.

A man was having his house deloused and deep cleaned and wound up staying at the local Marriott that I worked for at the time. He was there for something like 30 days or so, drunk off his ass and high on something the entire time.

He never once let housekeeping in. After his departure, the cleaning staff finally entered the room. They were horrified not only by the stench of the place, but also by the utter wreck he left behind. Basically every single piece of furniture was severely damaged, the floors stained and greasy, the linens too far gone for further use, and rotten food everywhere.

It took a week to get the room back in rotation. No wonder it took a month to get his house cleaned up and free of vermin.

One of my relatives worked in the hotel industry. There was a guest who just left, and when the cleaning ladies entered the room, one of them noticed a pungent smell.

Went into the washroom and holy mother of god.

Apparently someone stuffed a towel filled with poop down the toilet bowl, and the floor was covered with weird yellow stains.

There are always three rooms that will stand out to me above all else though:

1) We had this guy stay for a full week without letting housekeeping into his room. Each day we brought him new towels and new trash bags and he would meet us at the door to take them. When he left, we were terrified of what we would find, but the room was spotless. He had not touched a thing, and had even gone behind himself to clean with bleach. All the towels we brought him were folded up neatly, apparently unused. Even the bed was how we had left it. Super weird.

2) Walked into a family’s room to replace towels and do general clean up while they were still there and was met by their 12 year old son jacking off. This is after I knocked on the door and he said it was ok to enter. I immediately left the room and returned an hour later when his parents were around. The whole time I was making up the room, the boy sat on the bed crying.

3) Worst room I ever walked into was not dirty in any way. General dirtiness from use, but nothing special. Or at least that’s what I thought until I checked under the bed. There was a GIANT blood stain, taking up almost all of the floor under the king sized bed. We immediately left the room and called the police. I dont know if anything ever came of it, but we shut down the room for two weeks so we could completely replace EVERYTHING.

4. That is all horrible.

I used to serve room service in a hotel that was near a major national hospital, and the two locations had reached some sort of business agreement where people going into surgery could stay at the hotel the night/nights before for a discount rate.

During my three years there, we had about six guests die during the night while waiting for surgery. It was always handled in a really hush-hush manner, but it was always f*cked up to hear about.

We also had a couple of p**n shoots go down in the guest rooms. Getting a room service request for four bottles of coffee and lots of wine at half-past midnight was always a good sign that something sketchy was going on…as was opening the door to see filming lights and tripods.

We had an elderly (70s) couple stay with us once who were the absolute best. We offered a complimentary dinner around 6 p.m., and the wife had come over to the front desk and brought me a plate of dinner, saying “You’re far too skinny to get any girls, young man.”

I thanked her and ate it, while her husband walked up, gave her a leash, and she left to go walk the dog outside while her husband and I talked about what they were doing in my neck of the woods. They go back to their rooms about half an hour later, and I go about my business.

Around 8:30, he calls down crying, saying his wife won’t wake up. I go up there, calling 911, but I found that she had passed away, sleeping on his shoulder, while they were watching Wheel of Fortune.

I wept like a girl that night, and kept him company while he tried to call his children, who weren’t picking up their phones.

As the owner of a bed and breakfast place the craziest thing i found was an old battered notebook with “Why i love salad” written on the front.

And then literally 40-80 pages on why salad was amazing.

There’d be the occasional suggestion that the author believed salad to be alive in some sense. Looked like it had been written on and off over the course of several years.

1. That wasn’t in the job description.

I work at a low-budget hotel in western PA. Like two weeks ago we had a guest who was getting kicked out for not paying their bill (they had stayed with us for a few months but started slacking on paying what was due). Well checkout time comes, they haven’t checked out with the office.

We go to knock on the door, no reply. We go I side and find them (two ladies in their 50s) dead from an overdose. They had apparently been dead for around 12 hours. Coroner comes and we find out that he needs helping moving the bodies, so me and a few of my coworkers have to lift these two bigger dead ladies and transport them out of the room, down the stairwell, and into the coroner’s vehicle.

Sure, they were in body bags at that point, but still it was so surreal because nobody saw this coming. We all loved them, they just couldn’t pay their bill anymore and killed themselves. They left behind a “note of self destruction” and everything.

If you’ve worked in a hotel, hit us with your best stories in the comments!