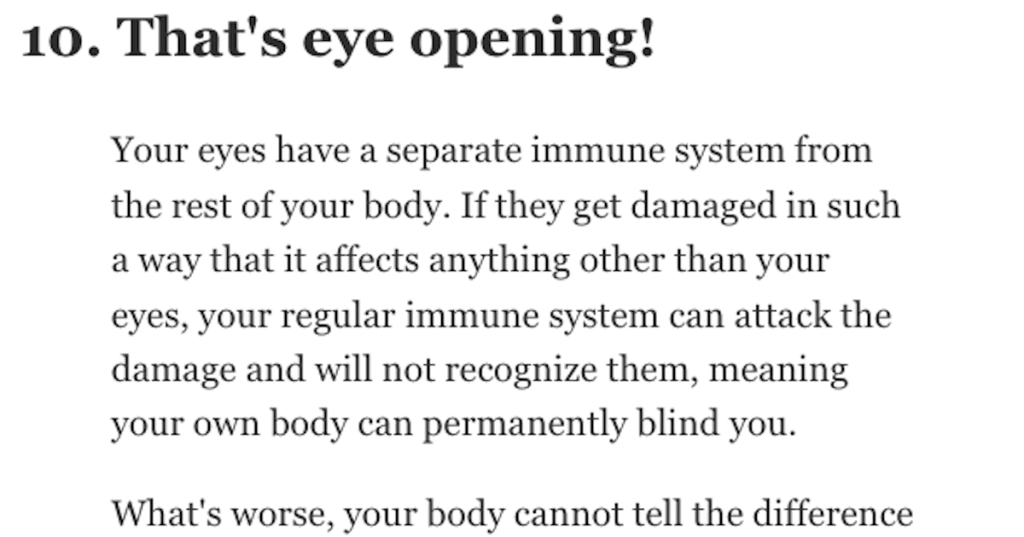 17 of the Creepiest Facts and Stories on the Internet

If you’re someone who loves creepy and chilling and even macabre, there’s a good chance you’ve got to have all kinds of weird facts at your disposal.

And if you love those things, you’re probably also always looking to learn more of the same – so here are 17 really creepy things you might not have known before now.

17. This gets creepier the longer you read.

The men of the ship Essex (the true event that inspires the story “Moby Dick”) avoided islands after being shipwrecked for fear of cannibals. The islands were settled and landing there would have brought salvation to the survivors. Ironically because of this bypass, the men ran out of food and were forced to eat each other for survival.

Two of the sailors were later rescued by an American ship. They were alone at sea for so long and had to cannibalize their crew mates to survive.

When they saw their rescuers, they immediately stashed bones in their pockets. They didn’t seem to care that they were rescued. They were obsessed with the bones of their fallen crew mates, so they can suck on the bone marrows. Even after they were onboard the ship, they refused to depart from the bones and would even attack anyone who would come close.

There is a genetic disease called fibrodisplaysia ossificans progresiva. When tissue is damaged, it is replaced with bone.

Growths form underneath their skin and their joints lock solid So over time those affected slowly become encased in a prison of bone just beneath their own skin.

They usually have to choose between sitting or standing up for the rest of their life. By the end of their life they have to drink every meal through a straw and can barely move

The Chankiri Tree is a tree in the Cambodian Killing Fields against which babies and small children were bashed after their parents had been killed.

14. At least I’m used to dealing with that now.

If you get a blood transfusion and get the wrong type of blood (A, B, O, AB) one of the symptoms is “a sense of impending doom”

13. Nature is a cruel master, my friends.

There is a fungus, Cordyceps, that can actually brain-control insects, forcing them to move to a higher location where they will eventually die and release more Cordyceps spores.

Humans eat them to make them feel better.

They grow so big that they spend more energy to shed than they can reserve.

So… they die of exhaustion.

11. I would not like to die in a fire please and thank you.

A Fire Whirl can go as big as an EF3 tornado.

Your eyes have a separate immune system from the rest of your body. If they get damaged in such a way that it affects anything other than your eyes, your regular immune system can attack the damage and will not recognize them, meaning your own body can permanently blind you.

What’s worse, your body cannot tell the difference between either eye. If one of them gets infected or damaged, your immune system can attack your healthy eye and take away your sight entirely.

9. That’s just what this year needs, don’t you think?

Bacteria and viruses can be frozen for millions of years and still be viably infectious, and having never encountered humanity before, could have no end of catastrophic results should they be uncovered and manage to infect a person or animal.

Not to worry though, it’s not like millions of ancient pathogens are currently trapped in permafrost which is now melting bit by bit each and every day…

8. You should see the look on my face right now.

Over 90% of Serial Killers choose their victims through sexual desire.

7. I promise you we probably don’t want to know.

in 1975 the CIA had a heart attack gun, it kills people and then the dart denigrates. just imagine what is classified now.

6. Another horrifying tale from the American elite.

Rosemary Kennedy was JFK’s sister. She suffered from oxygen deprivation at birth and that unfortunately stunted her mental growth. She had a pretty decent childhood, but as she grew older she began to act out. Afraid that her behavior would risk his political career, her father, Joseph, agreed to have her lobotomized. Her mother, Rose, was against it and forbade him from doing it. So he did it behind her back when she went on a trip.

After the operation, Rosemary’s already low IQ was lowered even further, to the point she could no longer walk or communicate. Her family had her locked up in an institution and basically disowned her. They never visited and never publicly acknowledged her anymore. Rosemary died at the age of 86.

Her mother never for gave her husband for what he had done.

5. Think about THAT the next time you go for a nice boat ride.

The bottom of lake Superior is cold enough that the bodies of dead sailors just…remain. they don’t really decompose because it’s at freezing temperatures, so they instead get a coating of adiposcere (think that’s how it’s spell) which is liquid body fat, hardened around them.

4. The answer is obviously zombies.

Remember that bath salts cannibal guy from a couple years back?

He wasn’t high on bath salts when he did that. That was just media speculation and bulls**t. They only found pot in his system during the autopsy.

We still have no idea why he flipped out.

3. That’s kind of a fun way to spend your afterlife.

Elmer McCurdy was a failed old west “outlaw.” His preserved body was put on display in a traveling carnival and years later he was eventually assumed to be mannequin until he was used on set for the TV show the Six Million Dollar Man.

His arm accidentally fell off during the shoot, revealing bone and muscle and that he was a corpse, not a mannequin.

Police were called and the mummified corpse was taken to the Los Angeles coroner’s office. On December 9, Dr. Joseph Choi conducted an autopsy and determined that the body was that of a human male who had died of a gunshot wound to the chest. The body was completely petrified, covered in wax and had been covered with layers of phosphorus paint. It weighed approximately 50 pounds (23 kg) and was 63 inches (160 cm) in height. Some hair was still visible on the sides and back of the head while the ears, big toes and fingers were missing. The examination also revealed incisions from his original autopsy and embalming. Tests conducted on the tissue showed the presence of arsenic which was a component of embalming fluid until the late 1920s

So for anyone wondering how they didn’t know the corpse was real, it was because it was a corpse covered in wax to look like a wax dummy.

The Colombian serial killer Pedro Alonso Lopez, who is known as the Monster of the Andes, murdered over 300 girls from Ecuador, Peru and Colombia.

However, after he was caught and imprisoned for 18 years, he was put in a psychiatric hospital.

There he was reviewed, declared to be sane and was set free, in spite of his blatant avowal that he fully intends to kill again.

Since he was released in 1998, nobody knows where he is or what he’s doing.

He is supposed to be 71 years old at present. He is known for being the most prolific killer ever.

After assaulting his blindfolded victims, the Golden State Killer would be super duper quiet and pretend like he was gone.

Right when the poor victims would start to move towards the phone or try to untie themselves he would scare the f**king s**t outta them.

I’m creeped out (delightfully), how about you?

Share your own favorite creepy facts in the comments, please!