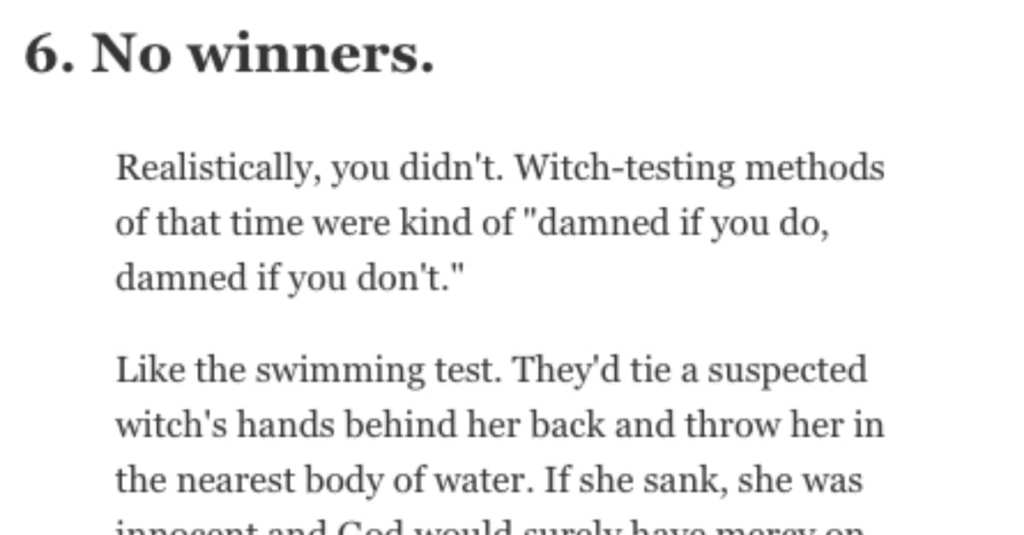 17 People Answer: “If You’d Been Accused Of Being A Witch In Salem, How Would You Have Proven Your Innocence?

A fun question for the time of year, even if the actual history is as dark and disturbing as it gets. Witchcraft in the 17th century was no laughing matter, and no, I don’t think “drowning” was the best way to prove your innocence.

Even if it was just about the only way.

Here are some other, less common (and probably less effective) answers!

I’m way too dumb to be a witch.

16. Throw someone else under the carriage.

If I’ve learned anything from playing Town of Salem it’s that I need to claim I’m the sheriff and say someone else is lying.

I tear my clothes away from my body, shocking and horrifying the onlooking accusers, then proceeding to gyrate my hips in a circular motion as to swing my meat around like a helicopter.

This should confuse them enough to make them believe I’m simply the village idiot.

You don’t prove your innocence. You save yourself by confessing, repenting, and saying you’ve now accepted the way of Jesus.

Then, now that you’ve reformed, you help the town by spilling the beans on who the other witches in town were who you used to worship Satan with.

Start with the one who accused you.

Turn everyone into newts.

By the time they get better, I’ll be long gone.

Wait, I’m supposed to prove my innocence, not distract and flee the scene.

It was pretty much that.

Everyone who admitted to witch craft was spared, but those who insisted they were innocent were killed.

They even killed 2 dogs for witchcraft, that’s how obsessed they got with it all.

If I was a witch do you really think I’d choose THIS (While gesturing to my entire body) for my appearance?

10. Bring science into the matter.

I’m obviously lighter than a duck, guys! Leave me alone!

9. Unless they think logic is witchcraft, like we do now.

Ask them what else they burn.

Then, reason that wood floats, and ask them what also floats.

Then, reason that since witches float, and ducks float, if I weigh as much as a duck, I’m a witch.

I wouldn’t be able to. Those things were decided way before I was accused. No matter what I said, no matter how I pleaded, if the people who were accusing me wanted me to hang, I was going to hang.

Instead, I would take down as many people as I could with me. Grab an axe, a pistol, a rifle, hell, break a bottle and just take out my accusers. If I am going to die, so will they.

Like the swimming test. They’d tie a suspected witch’s hands behind her back and throw her in the nearest body of water. If she sank, she was innocent and God would surely have mercy on her soul. If she floated, she was obviously in league with Satan.

Or they’d ask the accused to recite a commonly used prayer, such as the Lord’s Prayer, with no mistakes. Any omissions or mistakes (which could easily have happened due to nervousness from being forced to do this in front of a large number of people in a courtroom) were seen as signs of corruption.

One suspected witch, George Burroughs, was able to recite the requested prayer flawlessly. However, this was seen as a devil’s trick and he was executed anyway.

They’ll be so impressed with the smooth dance moves that they’ll forget about killing me.

4. What if it grows back though.

I’d just say “cut me a finger and look, if I’m a witch (or wizard) it will grow back”

3. We all stan that revenge.

When I was in my high school production of The Crucible, we used to joke about doing a spoof musical revue called “CRUCIBLE!” that involved Abigail and Elizabeth running off together (and trashing John Proctor’s bedroom prowess), a chorus line of Puritan women in thigh high skirts, and Tituba getting her revenge.

It ended with a calypso number called “Back to Barbados” where she gets to sit on a beach with a fancy cocktail.

I would tell them to splash holy water and to bless me. If I indeed made a deal with a devil, the very touch of holy water would burn.

Why do people even try to answer this with some sort if smart religious test. They knew you weren’t a witch they just wanted to kill you.

1. That’s quite a detailed plan.

Get some sort of break that lets me go outside before the trial. Find a small frog and put it in my pocket.

Accuse the judge of being a witch and cursing me to vomit up frogs as I reach into my pocket with one hand. Then I cover my mouth as if to avoid vomiting, all while putting the frog in my mouth. Then I spit it out like I’m puking it up. Now I’ve proved the judge is a witch, and unfit to try others.

Rinse and repeat with different methods until no judges are left or until any form of government finally steps in.

People are so great when they’re not staring actual death in the face.

Play along – give us your answers in the comments!