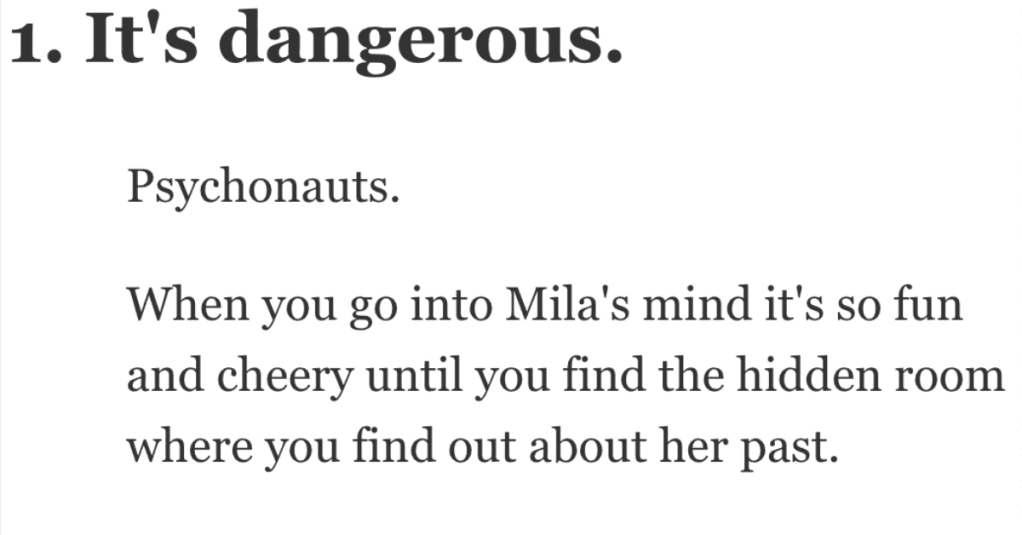 If you’re a gamer, you know that game developers and sometimes even players can leave Easter eggs deep inside of a game – and you also know that those things aren’t always things you wanted to find.

If you’re wondering what sorts of things people have stumbled across deep inside games, these 17 people are ready to dish.

17. Good and properly freaked out.

Not disturbing in the same sense of the others, but the silent ballerina slicers in BioShock creeped me out good and proper.

There’s one section where you walk across a huge room in ankle-deep water and there are some in there, posed. You walk across, with just the ambient sounds of Rapture which are creepy enough, pick up a thing on a little dry patch and turn around. Every one of those splicers is now facing you. Staring at you. And then they run at you.

I panicked and fired my plasmid, the electric bolt one, and killed them all. And they all fall down without uttering a sound.

Far Cry; Only you… that stuff messed with my head irl after.

The atonement and John literally ripping your tattooed sin off your body, the brainwashing in the mountains, the feeling of slowly losing your mind in the bliss filled henbane. The bodies strung up and stuffed with trash? Flowers? I hate it regardless. Boomer’s family 🙁

I don’t blame the people finding cars and fleeing as fast as they could.

I remember the first time I played through Portal in about 2008. My buddy played through the whole thing himself first, and I went to his house to play through it afterwards.

I kept finding wall panels that should have been used for portaling, but I kept scooting up underneath them.

My buddy hadn’t explored any of that, and the stuff that was written on the walls was a little horrifying.

Having to drill a needle into your characters eye for some reason in Dead Space 2.

If you slightly mess up the QTE, it drills your characters brain out and you die.

Stuff happening to eyes is pretty much the only thing that really gets to me in horror media. That segment was absolutely nerve-wracking.

Murdering the elephant queen in It Takes Two was pretty dark.

My pregnant wife’s hormones had her tearing up and I’m pretty sure my jaw was open to the floor. Ya the earring or pin part was bad lol.

And the cute little voice!

In Haunting Ground if you die to your stalkers you can hear them in the background of the game over screen desecrating your body (while laughing or enjoying it).

There is also a bad ending where the main character ends up “impregnated” with the main antagonist as well?

The clock tower series is seriously fucked up. Clock tower 3 featured a 15 year old girl. I had no idea what I was playing but was excited to pick up a horror game. Having to hide from big baddies was thrilling and terrifying until one caught up to me.

I watched this girl desperately crawl trying to flee when the hammer dude decided to bash her mercilessly.

When you find out how darkspawn are made in Dragon Age: Origins.

First day they come and catch everyone

Second day they beat us and eat some for meat

Third day the men are all gnawed on again

Fourth day we wait and fear for our fate

Fifth day they return and it’s another girl’s turn

Sixth day her screams we hear in our dreams

Seventh day she grew as in her mouth they spew

Eighth day we hated as she is violated

Ninth day she grins and devours her kin

Now she does feast, as she’s become the beast

When you first arrive at the mental hospital in Outlast, you stumble across two escaped patients raping a corpse. They didn’t appreciate being disturbed…

“You like to watch you little sicko? You weren’t invited to watch!”

Or watching the Groom in the DLC castrating the male patients to make himself the “perfect wife”. The DLC really took things to the next level.

Outlast DLC. You go around a corner and there’s a body on a table set up to look like it’s giving birth.

There’s also a head. Where a head shouldn’t be.

Whilst most of the vaults will have the aftermath of some twisted science experiment waiting to attack you, Vault 11 is completely deserted bar a few mutated insects. Reading the terminals and listening to recordings reveals the inhabitants had to vote for one person to sacrifice every year or else they’d all be killed.

They kept doing this until only 5 survivors remained. The final 5, made a pact that they would not kill another member and would instead wait for the vault to kill them. Only for a message to play congratulating them on their mercy and bravery and called them “a shining example of humanity” for not sacrificing one of their own.

Whole thing was a messed up social experiment to see if they would actually do it.

Of the 5 survivors, 4 killed themselves and the final one walked out into the wasteland hoping to tell his story. Proper messed me up did that one.

Actually, it got a lot darker than that.

The vault residents turned their ire onto the Overseer for not cluing them in into what they where getting into, who was the first to be nominated for Sacrifice. Because of this, the elected overseer would be the sacrifice after serving out their term, leading to the creation of ‘political’ factions known as ‘blocs’ that would campaign to nominate candidates to suit their goals. The nomination process devolved significantly over time, with bloc leaders turning to deplorable actions and manipulations. This would include the Justice Bloc sexually coercing Katherine Stone under threat of their nominating her husband.

When they nominated him anyway, Kate proceeded to murder members of the Justice Block not only in retaliation, but also to ensure she’d be nominated. Upon her election, she issued an executive order that dissolved the current election process, changing it so that the Overseer would be randomly chosen by lottery. This lead the Justice Bloc to stage a coup, resulting in the deaths of nearly all dwellers in the Vault… save for 5.

There’s a torture chamber behind a secret wall in Oblivion. As I progressed through it it felt more sickening.

This was one of the things that got Oblivion re-rated from T to M, along with a topless mod. Apparently when Bethesda first showed the scene to the esrb it was with no extra lighting so none of the details could be seen. Of course, in the actual game the player carries a torch or uses light spells and sees every detail.

I think the beginning of Evil Within 1 was pretty brutal and disturbing when you start out hanging upside down in that basement area and that big butcher dude slices another guy’s throat in front of you, then walks away.

You’re hanging upside down squirming and can see the blood pouring out on the floor.

That little room in the beginning of outlast 2 where they would sacrifice babies and you walk over all the dead baby’s bodies and it even makes little crunching sounds.

When you go into Mila’s mind it’s so fun and cheery until you find the hidden room where you find out about her past.

She used to work at an orphanage and it burned down while she was out shopping, because of her psychic abilities she apparently heard all their screams.

She tells you not to go further, and if you do go further you come to a room with a bunch of blobby creatures behind a cage whispering “help us” “save us”. She tells you that it’s dangerous there but luckily she has her nightmares under control.

It was just so sad and shocking seeing something like that in a game I thought would be a happy and funny children’s game. Though I guess the game did end up having a lot of twists which makes that scene seem like a pretty Psychonauts-ish thing now.

I honestly had no idea, y’all.

If you’ve found something that belongs on this list, please share it with us in the comments!