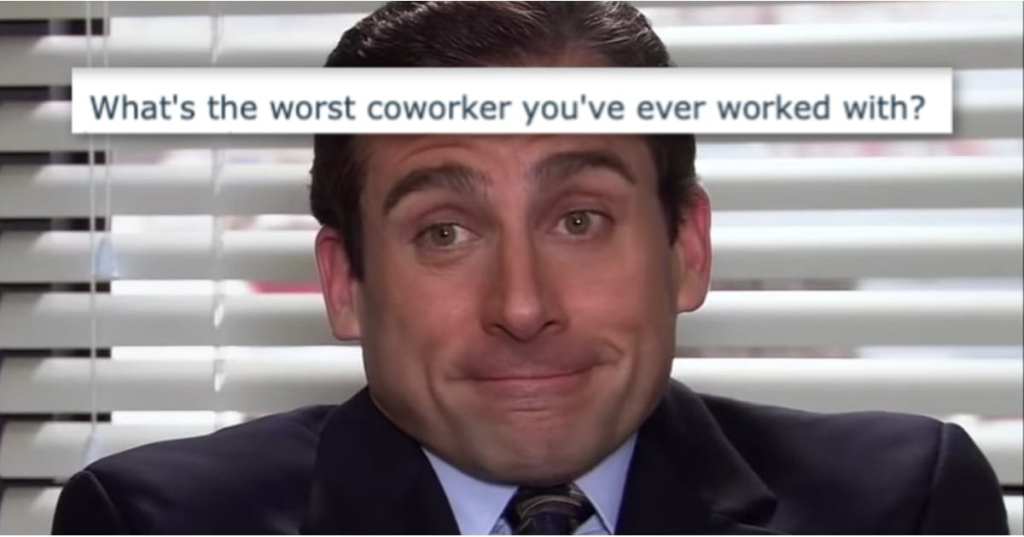 17 People Share Stories About the Worst Coworkers You Can Imagine

If you’ve worked at all during your life, there’s a good chance you’ve had a not-so-great coworker in there a time or two. I’ve worked since I was 16 years old, and a couple definitely stand out (not in a good way).

That said, there’s bad and then there’s these 17 people, who just take being a crappy coworker to a whole new level.

I worked with someone in retail. He was my boss, and not a particularly bad guy, but he was a control freak who had to interject his opinion during every conversation anyone was having with a customer.

This also went as far as him being in the middle of helping someone himself, stopping helping that customer to lean over to my till to “help” me with my transaction even though there was no indication I needed help and had worked there for over 5 years. This “help” would be in the form of him telling me what button to hit next on the till to telling a customer they were wrong to have any given opinion on a topic to telling customers that their choice of entertainment they were purchasing wasn’t what they were after, even if they specifically came into the store for that specific item.

He was also laaaaazzzzy as f**k! Not a bad guy, but holy hell do I not miss working with him.

I have a coworker who’s very old-fashioned and strongly believes that males and females cannot be friends.

Well, it just so happens that my manager and I, a male and a female, happen to get along quite well because of our similar ages and interests.

She reported me to the other managers for it and accused me of sleeping with him.

15. There should be office rules against this.

I’m pretty cool about eh, people all have their role to play, but one time we had a secretary that would microwave eggs and canned tuna every morning in a bowl.

Now… I am not a violent person, but the smell generated from microwaved eggs and canned tuna is down right repulsive by anyone’s standards.

14. Seems like that should have shown up on a background check.

He creeped the f**k out of all the girls at work and then it came out he had stalking and s*xual assault charges pending outside work.

13. A level playing field…or so you thought.

One of my favorite things about being in the military was that your pre-military status did not matter. Everyone wears the same uniform and you’d never know if your favorite military leader came from privilege or squalor.

The uniform, for all of it’s drawbacks, is an objectively effective unifier. It levels the playing field. Looking the same as everyone else challenged me to ensure that my work ethic and ideas created opportunities, not some predetermined status.

I had a peer who was “better” than all of that. He didn’t do the work unless it interested him (we didn’t do interesting things) and constantly complained that our work was below him. On more than one occasion, he tried to pay for others to do his work for him. His entire point of being in the military was to prove to his father that he could earn something, and sought to accomplish that by claiming he’d already earned it.

I worked with a guy who couldn’t learn new skills. When he started he had to learn new programs and processes, just like anyone would at almost any job. He couldn’t pick up on it, whether it was where to click in a software to get a certain result or how to fill out a report.

Everyone on my team took turns showing him the ropes and it never sunk in. I remember being so frustrated because he could not figure out how to minimize a window. “Top right corner, click on the straight line.” It took like 3-4 seconds for him to drag the mouse to the corner and then he’d hover around it but never on it.

Super nice guy, but impossible to work and collaborate with on projects because so much time was wasted.

11. Doesn’t he know giving up carbs does exactly the opposite?

A guy that was on the Keto diet, it’s all he’d ever talk about.

He once overheard a conversation I was having with a colleague on a particularly stressful day, he interrupted us to suggest I give up carbs in order to reduce my stress levels.

10. That is so not appropriate for work.

I work with this guy that tries to convert people to his religion every day it’s super annoying.

We don’t believe in your God, Todd!

9. I know it’s available information, but what is he going to do with it?

He knew information about the apartment we had just sold and told everyone at our department meeting how much we sold for.

8. They were just waiting for her to go that step too far.

I worked in a certain touring exhibition last summer. (Its not Potter, FYI) And of 200 people who were applying for jobs, 20 of us got the job. We were all close knit and had. A love for the the exhibit content and being all genuinely interesting people made us a family. Bar one woman.

She thought she was the world’s biggest star for having a 3 second cameo on GOT. And sent harassing messages and calls to many of us. She s*xually harassed a lovely guy on the shop team who had no interest. Undermined the bosses constantly, talked back, was rude to customers. When she thought we talked about her behind her back she got defensive and spiteful (we didn’t) one day she got knocked back for good by the shop guy, and for some reason decided to take it out on me. Started slobbering about me around to every other co-worker, but never to my face. She called me a white snake. Now, I am albino and my hair colour got me seriously bullied in school along the vein of her insults, so her name calling was very hurtful . I had enough and took it to HR, and she was fired for her actions.

I could go on, but she doesn’t deserve any more thought.

7. Even a small amount of power is too much for some people.

Back when I worked at a restaurant I was friends with the bartender, chill dude…. right up until they made him manager and that small amount of power and increase in pressure made him so angry all the time. He screamed at me that I was “s**t at my job” because I didn’t do a thing that I’ve never been asked to do before. He made me miss my last bus so I couldn’t get home, it was pitch black outside and I cried on the bench outside the restaurant. Worse working day and worst co-worker.

It took me a long time to get over that and realize I wasn’t a s**t worker, he was just stressed and didn’t know how to handle it I suppose.

6. When someone finds their way into your literal nightmares you know it’s bad.

I worked with a guy who’d interrupt any conversation to talk about anything as if he was the expert. And I don’t use “anything” as a hyperbole.

He truly had something to say about anything, including things he had never heard of or obviously didn’t know much about. When the subject being discussed was something in the category of things he didn’t know much about, he would slowly steer the conversation away from the original discussion to something he would like to talk about at the moment. It was both amazing and the most annoying thing I had ever had to deal with.

He was like that Wikipedia game where you start with Star Wars and somehow end up on LGBTQ+ struggles. Not to mention the “conversation” was basically 98% of him just talking non-stop.

Everybody else was way too polite and against conflict to say anything, including me, so most people just tried to stay away from him, but he’d follow people around.

I eventually left, but I even remember having a nightmare where he was the best man at my wedding.

5. I would have loved to have been there when he realized.

He was a complete utter moron.

He was incompetent in every way, but the icing on the cake was when he tried to put one of the pickup trucks into gear with the wiper stick and called me an idiot when I told him it was the wrong lever.

His name was Dan.

Dan was 37 working at a dead end job as a lab specimen processor in a windowless room for 9 hours a day. He ate only burger king, but without the lettuce because that’s “rabbit food”.

He drank literally a gallon of Mountain Dew a day, and was confused as to why people were horrified by that.

“There’s water in it” he would say.

Apparently if he ate corn he would vomit and have to go to the hospital. He would tell me he firmly believed that man and dinosaur roamed the earth at the same time, along with many other “theories” that came from his “gut”.

One day we got into a political argument before the 2016 election where he said “if Bernie Sanders is elected president, there will be a civil war, and I will not hesitate to kill you and your family”.

Dan was fired. I got out of there as soon as I could.

This girl I work with is overly picky about stuff, everything has to be her way or no way… she does everything louder to make it seem like she’s working, but she’s not actually getting anything done.

She has been caught stealing from other servers several times, but we have no concrete proof.

2. This woman doesn’t sound that bad unless you actually had to work for her.

My old supervisor. She was that special brand of “too nice.”

Laughing was her nervous tic and hoo boy it was CONSTANT. She was incapable of being assertive which is not the best quality for someone whose job is telling other people what to do.

The best she could do was be passive-aggressively nice when she REALLY needed something done which just made everyone dislike her.

1. Sometimes teaching is not your calling.

I worked with a teacher that sat at his desk the ENTIRE year.

Kids walked in and out whenever they wanted to. They did practically no work.

He told racist jokes and was terrible with the students. One day I was sitting in the teacher work room and another teacher noticed a phone on the counter. She asked if it was mine. When I said no we looked at the lock screen to see whose it might be. The picture on the lock screen was of someone’s bare tits. A few minutes later the bad coworker walked in and picked it up.

Needless to say he was let go.

I sure am glad I was never forced to share space with any of these people in my years in a restaurant and office!

Do you have a story that would fit right into this list? Share it with us in the comments!