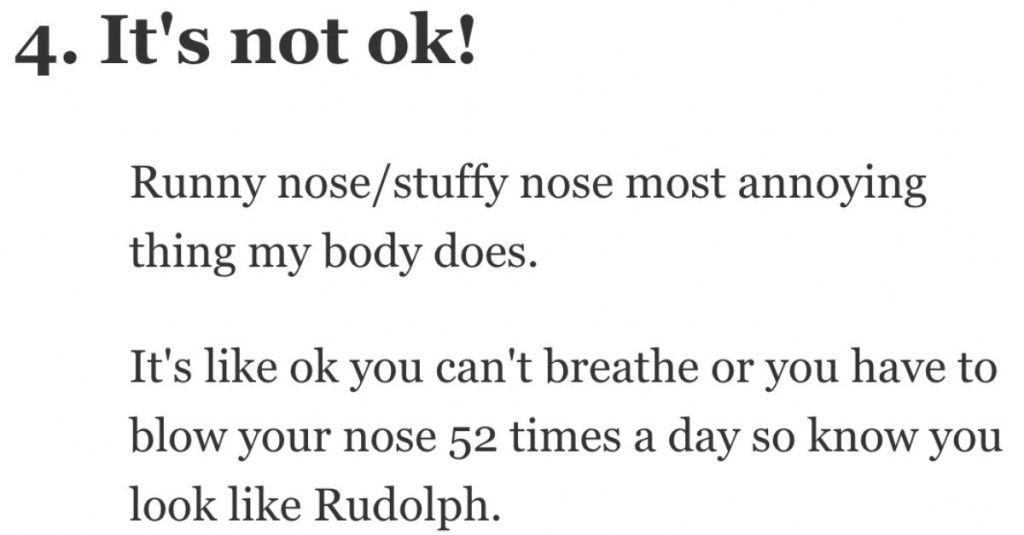 That said, a person can dream of a night of uninterrupted sleep, right?

These 17 people have some ideas about the most annoying bodily functions and why they would boot them if they could – take a good look at the list and see what else you would add!

I sweat pretty much all over my body, I have to wear thick hoodies to hide it as much as possible. Too bad I sweat from my head as well, no way to hide that. No, it has nothing to do with wearing warm clothes.

It has caused people to accuse me of coming in sick to work even if I am healthy. Lose a physical demanding job because they thought I couldn’t handle it even if I said I was fine. Not to mention all ruined first impressions in a social setting.

I can still sweat in freezing temperatures and even while taking a shower. The only way to stop my sweating has been solitude. I can do anything when alone, but when other people are nearby mentally or physically it just doesn’t stop.

16. An unintended side effect.

I’d like to say the need for sleep until I think about how companies would say “you now have 24 hours a day, work for 16-20”

This is such a close call between sleeping, dying, and shitting.

“You can live the next 60 years or so without ever having to poop again,
-OR-
You can be immortal, but you still have to poop.”

“Do I have to poop, like, all the time or something?”

“No, you just have to poop once a day or whatever like a normal person.”

“So you’re offering me, like, regular immortality? No catch?”

“Well, I mean, I’m also offering you a life free of pooping! The catch is you have to choooooooose!”

Auto-immune diseases. What the hack body??

I’d be ok with not needing to poop anymore.

Think of all the bloating, diarrhea, constipation, etc., that you’d never have to deal with again. I’m actually going to the gastroenterologist in 20 minutes because of ongoing digestive issues. Pooping is so shitty.

Menstruation. Just all of it. No feeling bloated, cramping, water retention, starving all the time/cravings, moodiness, and most importantly no fucking bleeding everywhere.

I would much rather get a nice hand written note from mother nature in the mail saying, “you’re not pregnant have a nice day”

Headache, wtf is this s*%t.

10. It’s not an inconvenience per se…

Imagine you can traverse any environment on Earth with 0 effort.

Plus space mission would be infinitely longer.

peeing/pooping – it’s so annoying, especially if you’re in the middle of nowhere and have to go.

I hope so! Sitting here with a toothache struggling to think of anything I’d want more.

Why the hell does every animal in the world get reabsorption but we get “sloughing off”???!!!

6. Someone with knowledge weigh in.

If it’s preventing bad mutations instead of just cancerous, I wonder in this hypothetical situation how a mutation like Sickle Cell would be treated since it also comes with the benefit of Malaria resistance.

The body is now perfectly calorie efficient, it burns away exactly as much food that is put into it, which is not used for functioning, energy, or muscle growth.

So you can eat whatever and your body will not pack on any excess mass, increase chance of clogged any arteries, or any other exasperated health concerns that come with over-eating.

Runny nose/stuffy nose most annoying thing my body does.

It’s like ok you can’t breathe or you have to blow your nose 52 times a day so know you look like Rudolph.

My nose is raw and I can’t breathe. Also my partner is probably going to kill me because I keep waking him up with the constant nose-blowing.

3. Especially ones to food.

Would love if kids just teleported into existence somehow.

This is like a party, y’all, seriously. I would second so many of these – come on, science!

What’s your nomination for deleting a bodily function? If it’s not on this list, drop it in the comments!