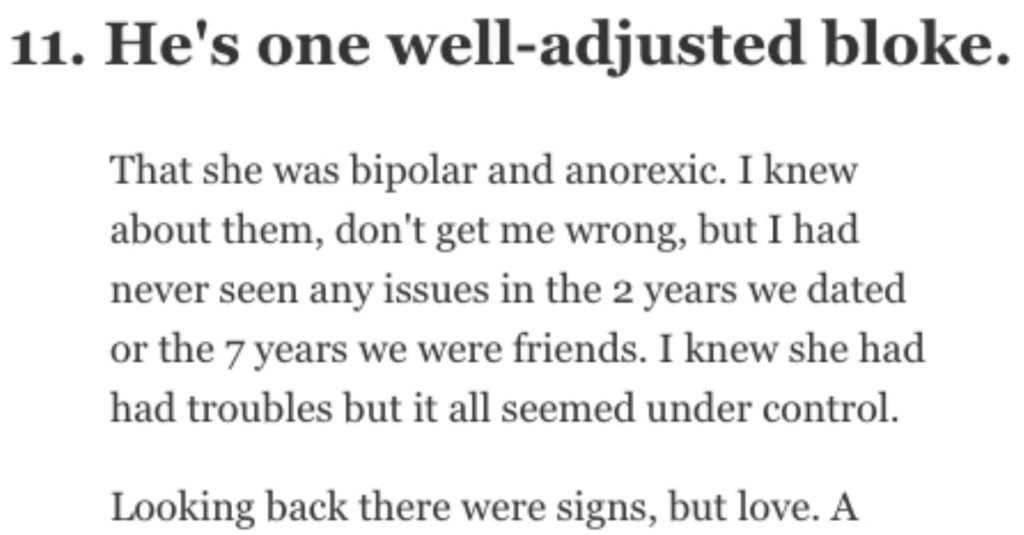 When people agree to get married, I think most of the time they trust that the other person – the person who claims to want to love them forever – hasn’t kept any major skeletons in the closet.

Now, there are obviously a lot of people who don’t enter into marriage with the best of intentions, but man – these 17 people got some doozies dropped on them once the marriage license was filed.

The fact that she is actually a good cook! For 10 years I cooked almost every meal because every time she cooked it wasn’t very.. well.. good. Got married and ever since she has made awesome meals which are absolutely beautiful.

I asked her when she learned to cook and she told me she had always known how to cook but wanted to make sure I wasn’t marrying her to be a housewife that cooks and cleans for her husband.

When my grandparents got married, my grandmother was 24 , and thought my grandfather was 25. It was during their honeymoon that he confessed that he was only 19.

Gran was annoyed, obviously, but I think she was too relieved to be married to stay mad at him; 24 was getting close to being left on the shelf for an Irish Catholic woman in the 60s.

15. These old stories are adorable.

Well my grandpa’s real name was Upton and he thought it was really weird so when he met my grandma he told her his name was James. Three weeks later (yes they got married after three weeks of knowing each other, the story is actually adorable) the priest asked my grandma if she takes Upton to be her husband.

This resulted in my grandma yelling in front of the entire church “who the hell is Upton?!” And then realizing my grandpa had lied to her because he thought his name was weird, she goes “oh Lord yes I do to take this stupid man as my husband.”

They were married 65 years with three boys, the oldest of which was named James. I never saw a couple more in love or meant for each other than my grandparents, God rest their souls.

My ex wife neglected to mention she was a lesbian until after we were married.

Kind of a deal breaker.

My EX-wife after a 4 year relationship and 2 years marriage told me she didn’t really love me and had just stayed with me because I was a good catch but now that I had worked hard there was enough money in a divorce that she could have any young guy she wanted, we were 5 years apart in age.

Got her the fuck out in 5 days with a separation letter and cash settlement of 1/3 of all assets, minimal legal fee’s. My lawyer said she had set me up perfect and just to pay and be free, took 5 years to pay off the settlement

12. Why would he want to get married?

That despite the life plans we’d talked about, once we married he expected me to be the breadwinner, the homemaker, cook and accountant in the family. He needed to “stay home and work on his music”.

Oh, and that two bedroom place? No, he didn’t want kids, he wanted his own bedroom. Oh, and intimacy? “I could just “do my business” in your room, but sleep in my own bed after”. Nope, nope, nope.

That she was bipolar and anorexic. I knew about them, don’t get me wrong, but I had never seen any issues in the 2 years we dated or the 7 years we were friends. I knew she had had troubles but it all seemed under control.

Looking back there were signs, but love. A month after we got married I had to enroll her in an eating recovery institute. 9 months. Not cheap. No problem though. I just wanted her to get better.

A month after she got home I had to send her to the local hospital where she stayed for two weeks while she went through a really tough time and they adjusted her meds. No problem though. I love her.

A few months after that she admits to me she never loved me (or anybody for that matter) she just put up a front for public. Well, let’s see of we can work on it. I still love her.

March of this year. She tells me she is a lesbian and leaves me for another woman. I am all for it. If this is who she is I can respect that, but f*ck me.

It sucks, but in all honesty it was a weight off of my shoulders. I didn’t realize how much her problems had been affecting me. When the papers were signed I felt like a new man. I felt like then sun shone a bit brighter. I had just started my dream job too, so I was able to throw myself into that. I still do love her, but I am not in love with her.

I never knew what that meant until this happened. If she ever asks me for help I will be there for her, but I will never ever get back Together with her. God that felt good to type. I don’t think I have ever said it all out loud before.

That he could juggle.

You’re with someone for a decade and you think you know him, then all of a sudden he starts juggling the four oranges he’s holding and when your jaw drops just says, “oh, I learned when I was a kid.”

This whole time we could have been on the road as a circus act and he waits until now to reveal his talents.

That he’ll happily do the dishes right after sex, without even being asked.

I seriously couldn’t believe it.

What kind of a guy did I get landed with?

8. If this was the 50s that would be a dealbreaker.

I was in a long term relationship with a guy when we decided to go around Europe. Fantastic 3 years into the relationship, first time traveling together, we get seriously lost and a domestic starts one of the worst we’ve ever been in.

Im jet lagged, lost with no clue where we are (some small town on the border) and thinking this might be the biggest mistake ever. Then all of a sudden he’s talking to a local in German.

3 F*CKING YEARS AND YOU ‘FORGET’ TO MENTION YOU’RE FLUENT IN GERMAN.

That he actually didn’t want kids, and that now we were expecting I needed to honor that.

6. I feel like there is more to this story.

My ex hid from me several things: the fact that he was sleeping with 16 year old girls (legal here), getting drunk with minors, was spending the money I was earning for bills (since he wouldn’t work) on said alcohol for minors, and that he was an abusive jerk.

He’s in prison now, but not for any of those things.

5. Important information to have.

That she has twins in the family. Our second set of twin girls turned one this month.

Three time felon looking to get married then divorced so she could get paid.

We were together 7 years before we tied the knot (tax reasons and love of course). 2 years later, and I finally realize why he seems disinterested in sky diving, zip lining, roller coasters, cliff sides, etc.. He said he only did it because I wanted him to.

I am not an observant woman.

My ex wife hid her physical violent tendencies until after marriage.

Nothing like getting punched for not doing the dishes correctly.

She farts. A lot.

Seriously, 2 1/2 years of dating and never heard a squeak. After the wedding, farting constantly.

I’m really surprised she didn’t let one rip at the alter after I said, “I do.”

I don’t know what I would have done in some of these situations, y’all.

How would you respond? Has anything like this happened to you?