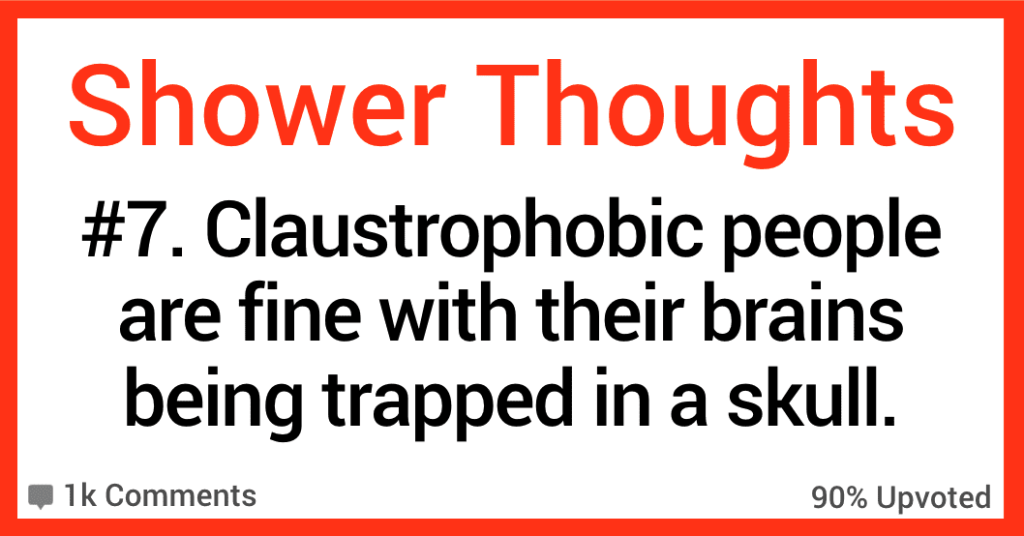 We have all kinds of thoughts in the shower (if we manage to get time in there alone), and despite what the movies would have you believe, they’re not all gems.

I have to say, though, that these 17 people’s wet-bodied musings are pretty good at making me do a double-take on what it’s like to be a human.

Get ready to think!

People get pets so they can talk to themselves out loud and not appear weird.

Tom Hanks has made a career of playing an ordinary man in extraordinary situations.

Alarms are messages we leave for our future selves.

Kids in the future might draw the sun as red instead of yellow.

13. A bunch of stuff that pisses them off.

No one really knows what a baby sees even though we’ve all seen it at one point.

Heat on, windows down on a cold day is the hot fudge sundae of driving.

11. Maybe that was the way it was always supposed to be.

Some people have without knowing killed themselves on the same day in which they were gonna die by an unrelated cause.

Mrs. Incredible can stretch or squeeze her body at her will, so she chooses to have a dump truck of an ass.

8. How do you know that’s not what’s happening?

If you had actual magic powers you could use them to do stupid magic tricks in front of the public and no one would ever know.

7. They probably were until they read this.

Claustrophobic people are fine with the fact that their brains are permanently trapped in a tight skull.

5. Thank goodness for that.

4. That is far too long to wait for tea.

If you kept yelling for 8-9 years, you would produce enough sound energy to heat a cup of tea.

3. And that’s all before Jack Jack enters the picture.

Elastagirl is the greatest mom in movie history, as she managed to raise a child who could turn invisible and another who could run faster than the speed of sound, and didn’t lose her mind in the process.

If mice were to have a health care system, their treatment options would likely be far more numerous and effective than ours, due to all the research carried out by humans that show success in mice, but almost never in humans.

Tickling is the most acceptable form of physical abuse.

Seriously, I’m going to be parsing some of these for a long time to come!

Which one are you still thinking about? Tell us in the comments!